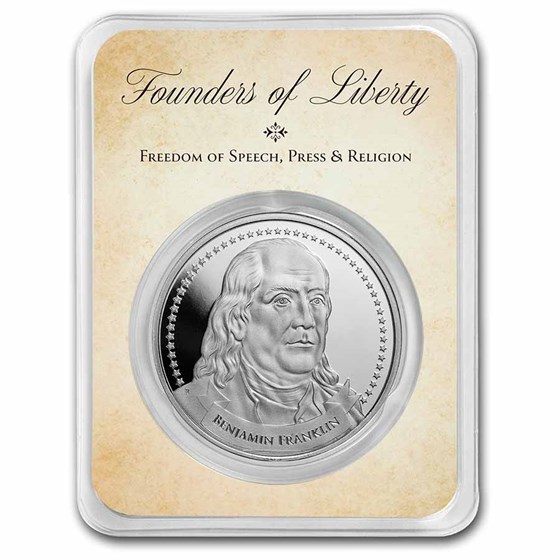 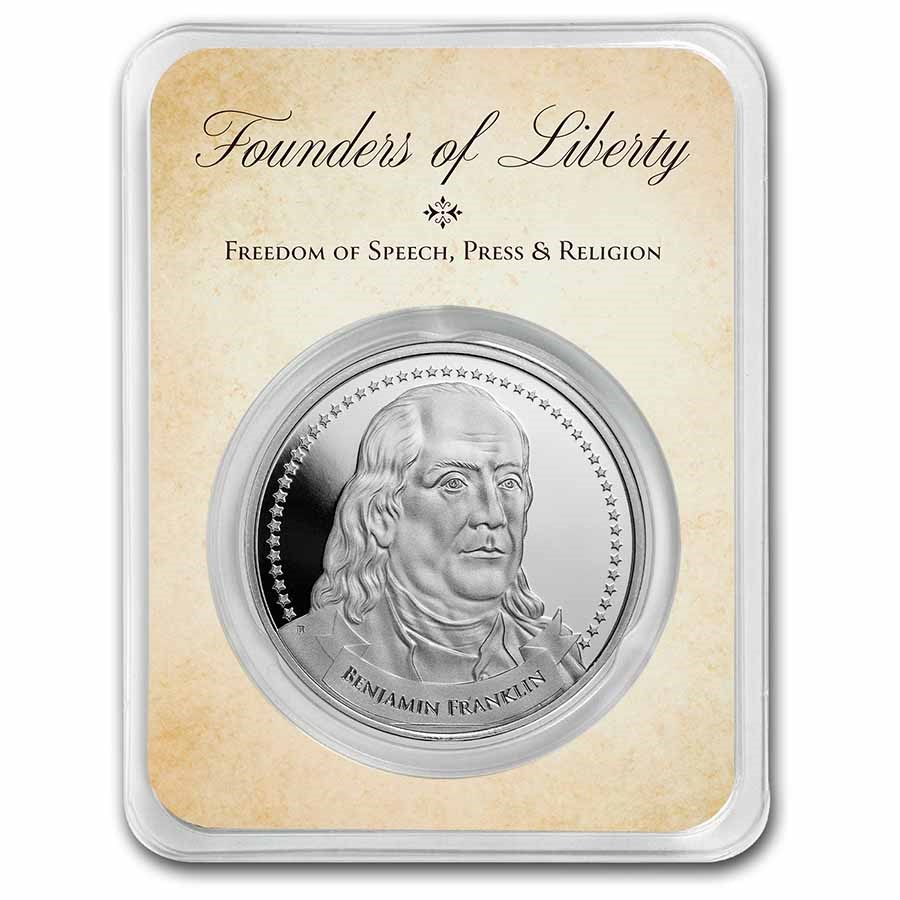 Product Details
Product Details
As low as $9.59 per round over spot
This is the first round in an exclusive series from APMEX celebrating the ideas that make liberty possible along with the men behind them. Each round is designed by famed coin designer Joel Iskowitz and comes in protective tamper-evident packaging!

Showcase your Benjamin Franklin Freedom of Speech round in TEP with this special wooden display box perfectly suited to hold it.

Celebrate the ideas of liberty and grow your Silver collection by adding this Freedom of Speech, Press and Religion Silver round in TEP to your cart today!


Benjamin Franklin and Freedom of Speech, Press and Religion
There's a reason freedom of speech, press and religion are expressed within the First Amendment of the U.S. Bill of Rights to the Constitution. Benjamin Franklin compared freedom of speech to freedom of thought and it is from this ability to reason and conceive ideas that all other freedoms derive. It is therefore fitting that the first round in the APMEXclusive® Founders of Liberty series is a celebration of the ideas prominently featured in the First Amendment along with one of America's most prolific thinkers and founding fathers, Benjamin Franklin.

Benjamin Franklin availed himself of free speech and began his path into the public eye by his work as an apprentice for his older brother James. James was a printer who published the newspaper, The New England Courant. James's refusal to publish any of Benjamin Franklin's opinions in the paper led to Franklin's creation of the pseudonym Mrs. Silence Dogood. Under this name, Franklin submitted letters to the paper that became popular among readers while also expressing many of the political opinions he would later be known for. In one such letter, Franklin expresses his views on freedom of speech, an excerpt of which features within the antique Silver round's certificate of authenticity in the exclusive series from APMEX.

Benjamin Franklin would go on to form his own printing company and make full use of freedom of the press to further express his ideas and opinions on everything from the weather to politics. By the freedom he enjoyed, Franklin would go on to become a scientist, inventor and statesmen instrumental in the founding and early governance of a new nation. A nation established upon the principles of liberty where people of all religious backgrounds could express their beliefs, worship freely and pursue happiness.


Founders of Liberty
Founders of Liberty is a unique series of rounds exclusively from APMEX that celebrate the ideas that make freedom possible. These ideas are depicted with symbolic representations on the reverse of each round while the obverse displays a historical figure who either developed the concept or was chosen as the idea's best representative. These rounds feature prominent voices for liberty, including U.S. founding fathers and the men they looked to for inspiration.

Each release in the series features a collectible limited mintage antique round with a special display box and certificate of authenticity alongside unlimited bullion investment rounds of the same design. These bullion rounds can also be acquired in special tamper-evident packaging which is a great alternative to the antique display round if its limited mintages sell out before you can order.

We are never more than one generation away from losing freedom. Pass these important concepts on as gifts to the next generation or build your Precious Metal holdings in a format that honors the people and ideas that made such prosperity possible.