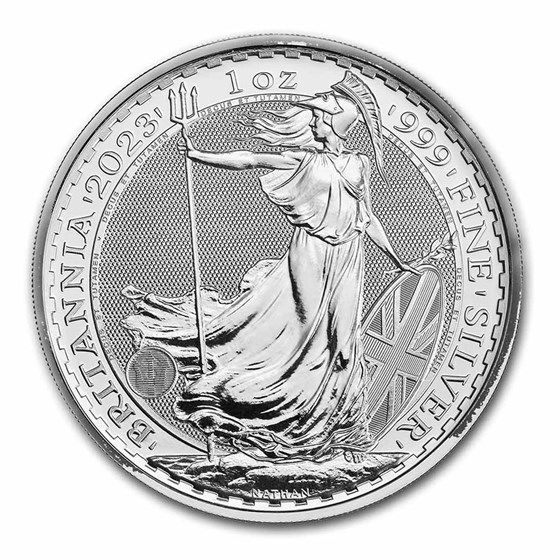 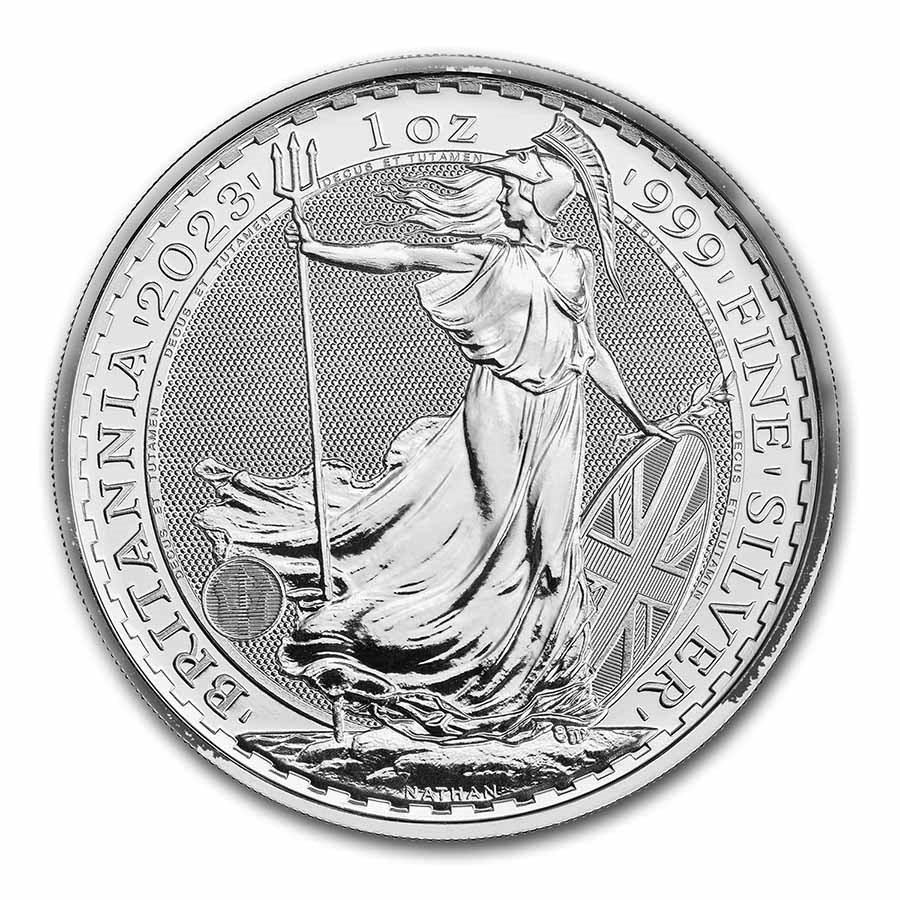 Product Details
Product Details
As low as $5.99 per coin over spot
The Royal Mint featured a limited production run of Her Late Majesty Queen Elizabeth II on 2023 dated Britannia coins. This, the second Britannia release of 2023, debuts the effigy of His Majesty King Charles III.

The 1 oz Silver Britannia coins were first produced as Silver coins in 1997 and are renowned for their beauty, trustworthiness and special security features.

Display your 2023 Silver Britannia with a stylish presentation box.

Add this 2023 Britannia featuring the first effigy of His Majesty King Charles III to your cart today!

The Great Britain Silver Britannia Coin
The internationally recognized figure of Britannia standing firm against a ferocious storm is displayed on the Silver Britannia coins. Since Roman times, this image has represented Britain's power and integrity on coinage. In 2021, the design of the coin was enhanced with surface animation, a latent image, tincture lines and micro text to provide further protection. Silver Britannias may be purchased in mint tubes of 25 or sealed 500-coin Monster Boxes alongside single coins.

The Great Britain Britannia Coin Series
First released as 1 oz Gold Britannia coins in 1987, The Royal Mint began producing the 1 oz Silver Britannia coin in 1997 as a Proof, and then as a bullion coin in 1998. The coins minted from 1998 to 2012 contain .958 fine Silver, and beginning in 2013, bullion issues became the first to contain .999 fine Silver. Today, the coin series is released yearly in several sizes in Gold and Platinum Britannia coins, along with the Silver Britannia coins in both Brilliant Uncirculated and limited mintage Proofs. In 2023, The Royal Mint released the final Britannia to feature the effigy of Her Late Majesty Queen Elizabeth II. This was done as a limited production run and was followed by this, the release of 2023 Britannia coins debuting His Majesty King Charles III's effigy. The year 2023 marks a historical moment in the coin's history as the first year featuring two reigning monarchs.

Track the current price of Silver per troy ounce with APMEX!

The coin I ordered had a few dings when it arrived. I wish it were in better condition

I have a couple of Britannia Coins. including the Elizabeth II 2023 coins. the last year of the queen will appear on them. I can wait until I get this one. this is first year king Charles will appear on the brittania. it's a must to any coin collector or stacker.