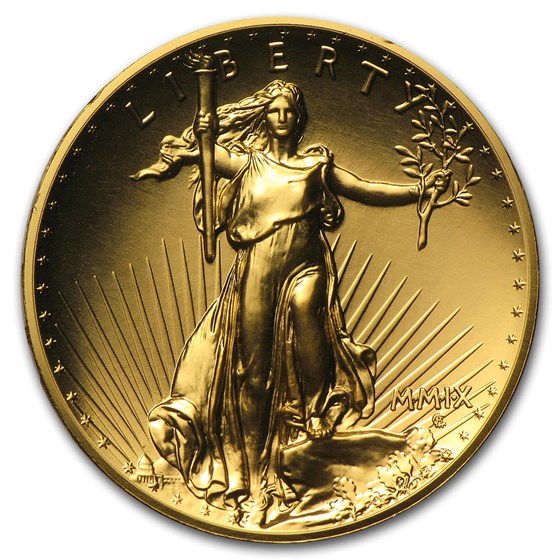 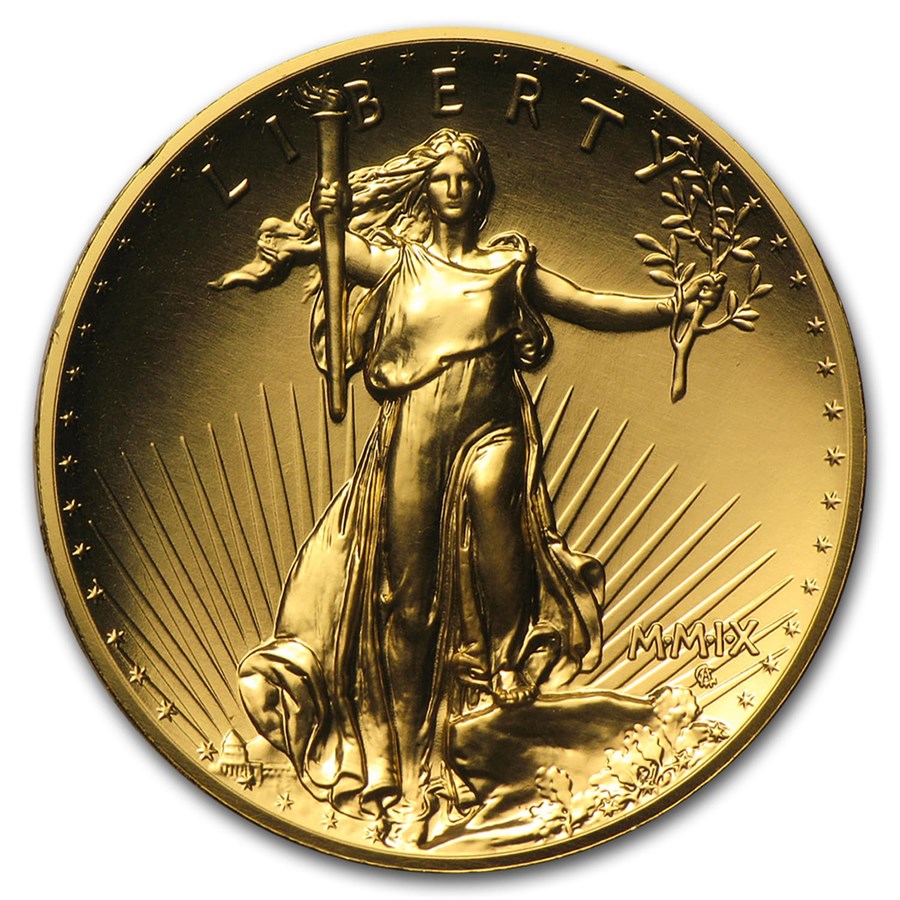 Product Details
Product Details
Issued in 2009 by the U.S. Mint for the 21st century collector, comes a modernized version of the original 1907 $20 high relief Saint-Gaudens. Struck in ultra high relief with a proof mirror-like finish, on a 27 mm 1 oz .9999 fine Gold planchet.

Coin Highlights:
Protect your Ultra High Relief Double Eagle coin by adding a pack of these cotton gloves or dehumidifier crystals to your order.

Technological advances enabled the U.S. Mint to realize the previously unattainable goal of making the coin accessible to all Americans. Enhance your collection by adding this 2009 Ultra High Relief Double Eagle coin to your cart today!

Modern Technology
Through 21st century technology and the vision of Director Ed Moy, original Saint-Gaudens coin plasters were digitally mapped by the United States Mint. Using the digital design and die-making process, the Saint-Gaudens sculpture—in ultra high relief—has been updated to reflect the year 2009, an additional four stars to represent the current 50 states, and the inscription “In God We Trust,” which was not on the 1907 version.

Additionally, a small border was added for a more consistent edge. The 2009 coin will be made of 24-karat gold. Pure 24-karat gold is much more malleable than 22-karat or 90% gold coins, making it better material for striking the ultra high relief.

The History
The original design itself was first shown to President Theodore Roosevelt in December 1906. At the time, Roosevelt ordered the mint to produce experimental examples exactly following the artist’s models. Mint engraver Charles Barber took his job seriously, and although he and Saint-Gaudens despised one another personally, Barber had considerable respect for the sculptor’s artistic talent and reputation. To a remarkable extent, this was accomplished by Barber during the first week of January 1907, with considerable assistance from Henri Weil. The two not only prepared hubs for a normal 32-millimeter diameter Double Eagle, but another set for the 27-millimeter specimen – the size of the current $10 Gold Eagle.

Very Happy to have this beautiful coin.

The most beautiful coin in the history of mankind.

It’s always been my dream to acquire 2009 ultra high relief double eagle. It was also my first order at Apmex hence its my test run in procuring from USA . Lesson learned i should have read again the rules at Singapore customs that certain type of precious metal is subject to 7% GST. I have no regrets i am happy in terms of packaging and also the coin itself is fantastic. The box also is in excellent condition

A fabulous work of gold art, and still accessible to the people--incredible. It still amazes me that these come up for sale 11yrs after they were minted--unbelievable.

Nice coin for the lady liberty collection. Smaller than the other ladies but attractive. Came with the us mint wooden box and certificate. The coin holder insert and the box itself has hidden magnets to prop up the coin for displaying. It’s a nice design. Obviously was a used/previously owned set. Box was scuffed up but that’s just superficial I guess. Thanks APMEX for another cool coin.

Beautiful Coin With All Original Packaging

A beautiful coin that came with all the original US Mint packaging, including COA, case, boxes and BOOK. The shipment got here in two days- way fast. Happy with all aspects of this purchase. Will be using APMEX again with no hesitation.

This is a beautiful piece of art that belongs in every collection. I just can’t believe there are still some around for sale given the one year mintage. Get them while you can.

This is the one coin I will never give up

I recently received my very first purchase/order from APMEX. The 2009 Double Eagle UHR (non-slab, w/ box and COA package) is, without any doubt the most beautiful coin I have ever laid my eyes on. This awesome coin has deep, deep mirror fields on obverse and reverse. No matte finish anywhere to be found, edges clean - which I did not expect. I preferred to ungraded coin/package because I have no intent of ever selling this coin. APMEX fully met and exceeded my expectation, and I was a little unsure of making such a big investment for the first purchase with them. Thank you, APMEX for coming through on selling me such an exceptional work of art that I will cherish for the rest of my life.

Nice coin, box and COA, but did not contain the book. Had to order the book separately from AMPEX for another $14.95 plus $9.95 shipping. Bummer

Merchant response: Thank you for your feedback. The item listing was clearly advertised to come with a box and certificate of authenticity, and not a book.

The coin is magnificent.