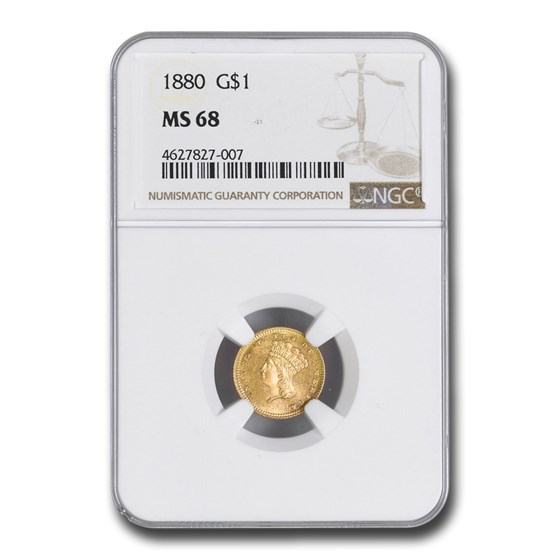 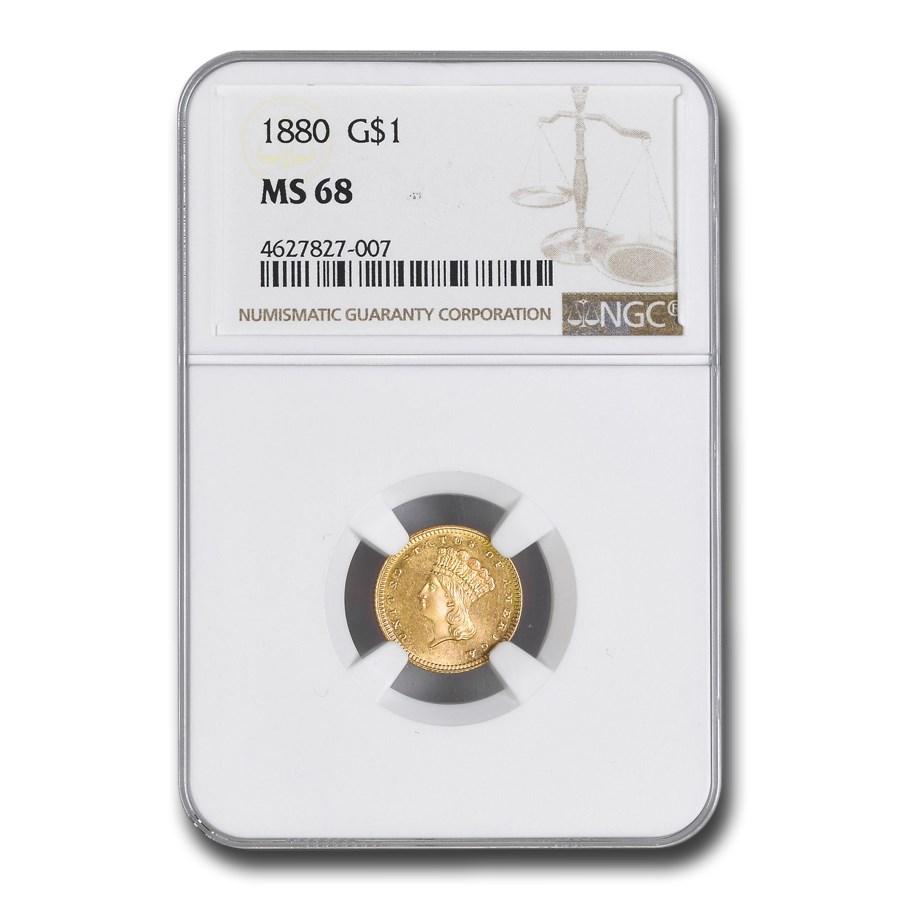 Your purchase will match the quality of the product shown.
Product Details
Product Details
This 1880 $1 Indian Head Gold has been certified as MS-68 by NGC, one of the top two coin grading services. This coin has a population of only 23 coins!

Protect your investment by adding a beautiful presentation box to your order.

Despite the 1880 issue having one of the lowest mintages of the entire Gold dollar series, it is one of the most available in this superlative grade. This coin offers an opportunity for the discerning collector to add a near-perfect specimen of this alluring type to their collection. Add this one to your cart today!

Introduced in 1849 as a response to increasing Silver prices taking Silver coinage out of circulation and the influx of Gold from the California Gold rush, the Gold dollar remains the smallest coin produced for use in American commerce. After considering several designs, including an annular design to increase the coin's diminutive size, the coin was initially released in 1849 with a Liberty Head obverse, familiar from other denominations of contemporary Gold coinage.

In mid-1854, the Gold dollar was increased in diameter from 13.5 mm to 15 mm, as its small diameter made the coin easy to lose, detracting from its popularity. With the increase in diameter, the design was changed to match the then-new three-dollar coin. The reverse on the wreath was redesigned, and the Liberty head obverse was replaced with Longacre's Indian Princess design. This design was used on late-1854 and 1855 Philadelphia coins, 1855's branch mint issues, and finally for the 1856 San Francisco mintage.

The Indian Princess as seen on the Type 2 dollar was struck in high relief, leading to strike weakness on the central reverse, as the metal of the thin planchet tended to flow into the portrait during the minting process. The "LL" of "dollar" and the central digits of the date are almost universally weak on Type 2 dollars, especially on branch mint issues. As a result, the coin was redesigned again for the 1856 year, with an enlarged version of the Indian Princess design, identical to that on the $3. This design persisted through 1889, when Gold dollars ceased production.