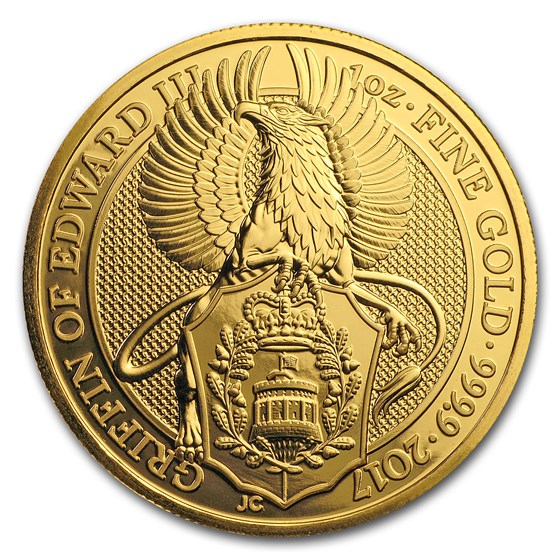 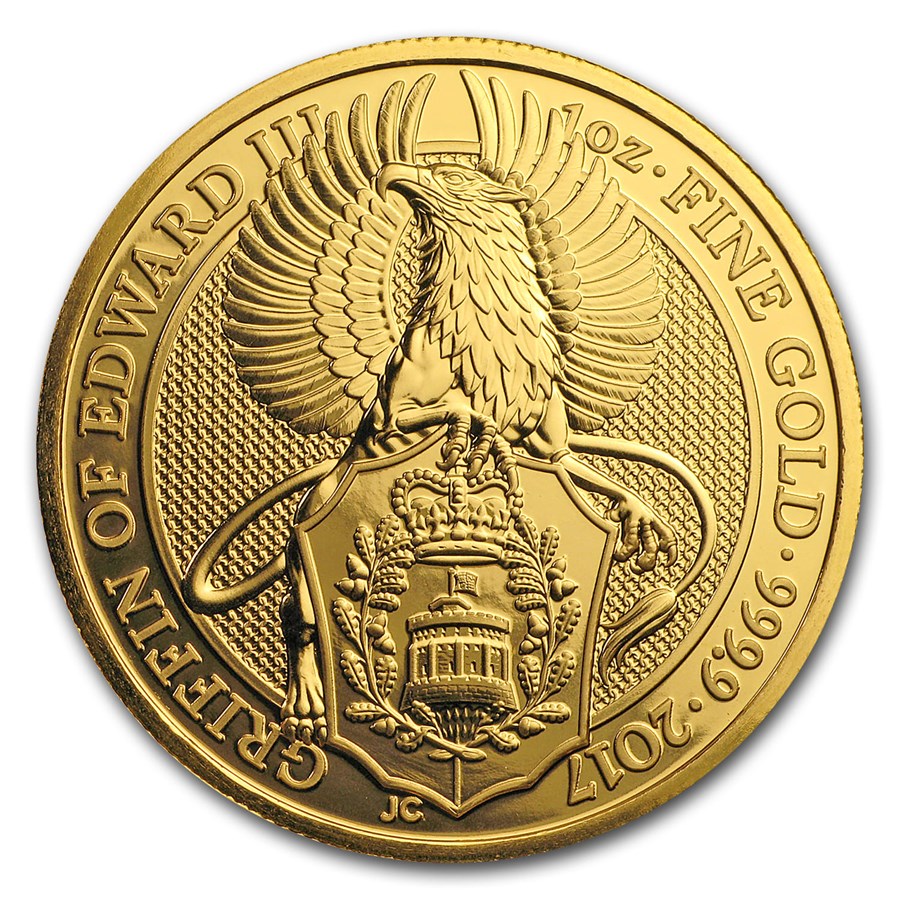 Product Details
Product Details
The second release in an exciting new 10 coin series. The Queen’s Beasts celebrate the British Monarch and the centuries of fascinating heraldry that has been a part of their story.

Coin Highlights:
Display your 1 oz Gold Queen's Beasts: The Griffin in style by adding an attractive display box to your order.

The Griffin represents one of the 10 beasts that stood guard at Westminster Abbey. These Queen's Beast Griffin Gold coins are popular because of the beauty of the design and the history that these coins represent. The Gold bullion coins contain .9999 pure Gold, and is sought by investors and collectors all over the world. The popularity of the bullion coins extends to all corners of the earth. The Royal Mint has a long history of minting popular Gold bullion coins for investors and collectors.

There will be ten designs altogether when the coins are officially introduced. The Griffin is considered a guardian and vigilant, a fierce protector of their guardian. You can buy a Queen's Beast Griffin 1 oz Gold coin at competitive prices and add to your Gold investment portfolio. There are few Gold coins that can match the beauty at high quality than the Griffin design.
In Greek mythology, the Griffin is viewed as a majestic and especially powerful creature.
See More +

The Queen's Beasts are 10 beasts that stood guard in Westminster Abbey when the Queen was crowned in 1953. The Queen's Beast bullion coins provide an extra quality option for investors that include high Gold content and a beautiful design. The details of the coin are intricate, featuring every detail of the griffin. The obverse is designed by Jody Clark, the youngest to design the portrait of Elizabeth II on the Queen's Beast coins.

All of the Queen's Beasts coins are absolutely stunning. Be they Au or Ag, the designs are beautiful. I can't wait for the next one in the series!!! SCStacker

Great coin, will complete the set over the years! The staff at Apmex was amazingly helpful and I look forward to the next purchase.

Another winner from the British Mint. The coin arrived in perfect condition. Very happy with the transaction (coin, price and delivery were perfect)

It's an investment mainly, but also I enjoy the beautiful design. Marvelous coin.

Big solid ounce of gold showing the second of the Queen's Beasts; symbols of the Monarchy. Magnificent design