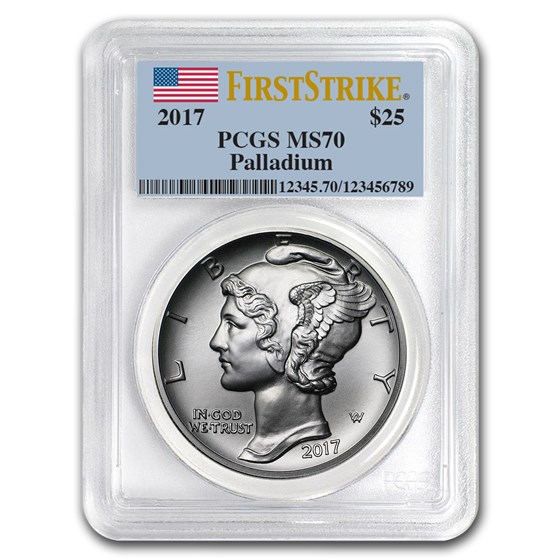 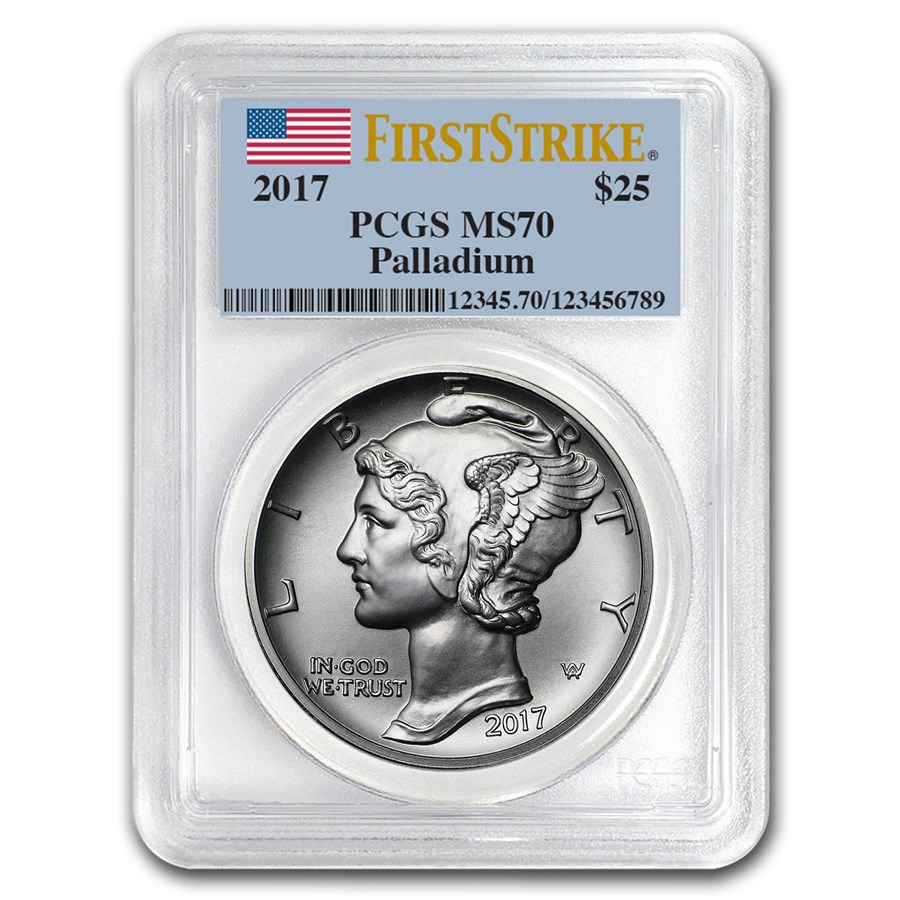 Your purchase is guaranteed to match the quality of the product shown. It will not be this exact item.
Product Details
Product Details
For the first time in 20 years, the U.S. Mint has added a metal to the American Eagle program with the first American Palladium coin. This Palladium coin pairs the classic obverse of the Mercury Dime with a reverse designed by Adolph Weinman in 1907.

Coin Highlights:
Protect and display your Palladium Eagle in style by adding a nice presentation box to your order.

Palladium is the first addition to the U.S. Mint's popular American Eagle bullion program since Platinum was introduced in 1997.

Containing a full 1 oz of Palladium and featuring stunning, historic designs, this inaugural issue of the newest American Eagle series is an excellent choice for diversifying your investments with Palladium. Add the 2017 Palladium Eagle coin to your cart today!

The Palladium Eagle coins use the likeness of the popular Mercury Dime design on the obverse.

Missed the early release and paid a premium for a solid graded coin. Hopeful with a first year production of only 15,000 coins that the collectors value will continue to rise and mitigate the initial premium paid. Very beautiful coin will be a prize in any collection and fun to watch the value in the coming years. Should see significant value increases for this limited-production coin. Time will tell.

First of a Series

Since this coin has a mintage of only 15000, I decided to purchase the MS70. It was worth the investment. I've placed many precious metal orders with APMEX, and this is one of the most beautiful coins I have ever received. I also ordered the glass-top presentation case to display it. Thanx again APMEX for another winner!

A Piece of History

Very happy to be able to get in on this coin, did not know it was limited mintage and was not sure about paying extra for the grading. Am very pleased I did! Coin was bigger and thicker than I expected but could be because of the holder. Very attractive coin

I like the fact that the mint only sold 15,000 and it was the first year for the new Palladium Coin and the design looks fantastic! Apmex delivered this coin fast, wired money in on Thursday coin showed up Saturday via UPS