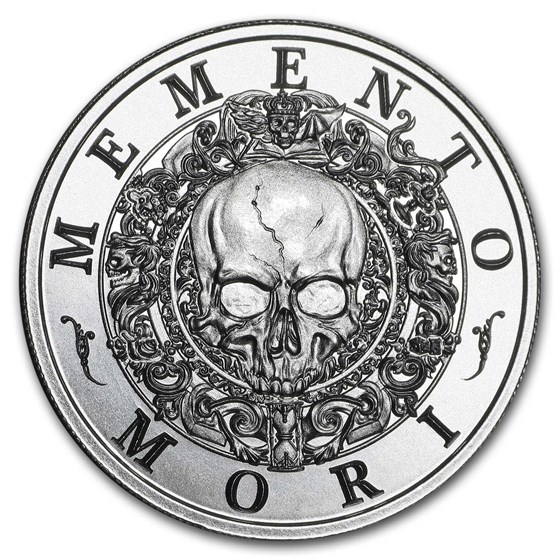 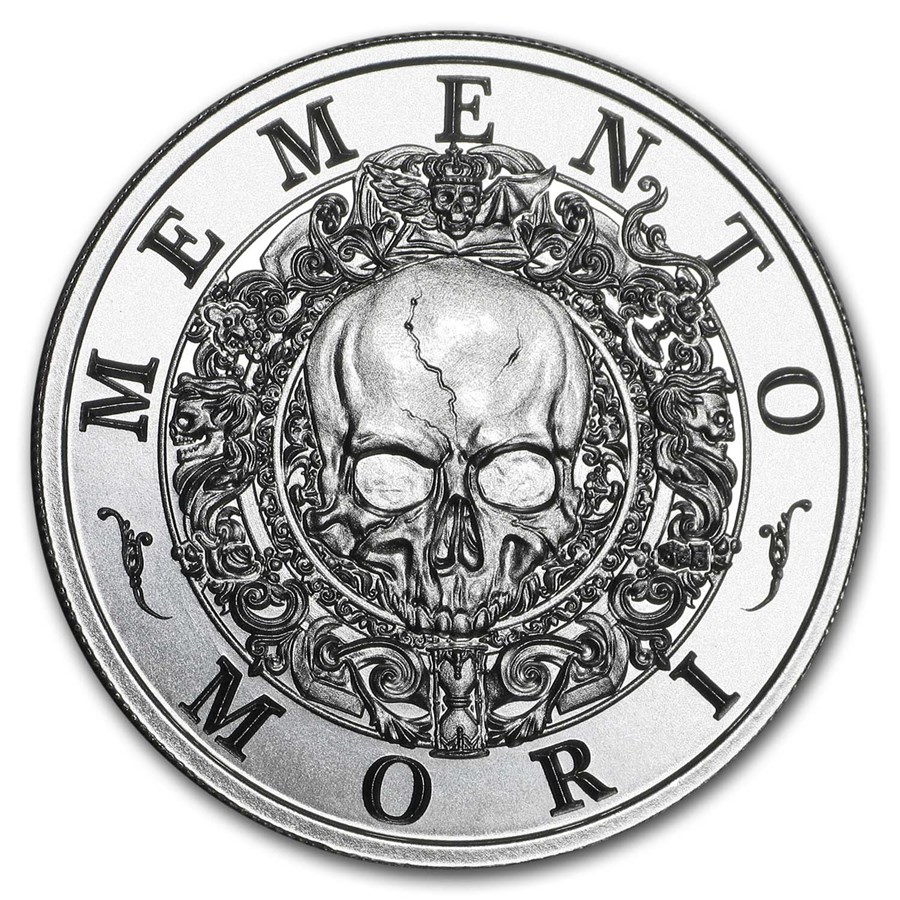 Your purchase is guaranteed to match the quality of the product shown. It will not be this exact item.
Product Details
Product Details
This 2 oz Memento Mori Silver round is part of the Latin Allure series. Struck in the smaller 39 mm format creating a thicker look and feel, which further adds to the collectible appeal.

During the time of ancient Rome, legend has it that a general returning home after being triumphant in an important battle, paraded around the entire city celebrating his victory. He received accolades, congratulations, and compliments from the crowds. For a moment, the general felt a great deal of pride and intense arrogance. At that moment, a slave, who would have otherwise gone unremembered, said in a low voice, so not to be heard by anyone but his master, uttered the words, “Memento mori.” “Remember that you too will die.” So profound and obvious that it remains important in Western culture even to this day.

The concept of “Memento mori” may seem overtly morbid to our sensibilities, but mindfulness of our own mortality is key to making us realize the importance of making the most of the time that we have on earth.

Quintus Horatius Flaccus, known in the English-speaking world as Horace, was the leading Roman lyric poet during the time of Augustus. For Horace, mindfulness of our own mortality was key to making us realize the importance of the moment. “Remember that you are mortal, so seize the day” (Carpe diem). “Carpe diem” is part of Horace’s injunction “carpe diem quam minimum credula postero,” which appears in his Odes (I.11), published in 23 BCE.

Part of my EDC - every day carry

I didn't really care much about what the design of the coin was like, I was interested in having it in my pocket as a reminder to seize the day, knowing that one day we all die. I like the design and had no trouble finding the "two troy ounces .999 fine silver" on the carpe diem side. I wish I could post a picture of it, it's incredible how nice the text is for how small it is!

This is my absolute favorite 2oz. silver round. Stunning design and details. I agree with Recordist in the below comment. This is a HARD TO SELL, because I will not sell it. I actually bought 2. One for the safe and the other to keep on me. What a great way to remember (especially in this day and age) to “Remember that you too will die" (Memento Mori) and “Remember that you are mortal, so seize the day” (Carpe diem). So buy a couple or more and Carpe diem!

I almost marked "Hard To Sell" as one of the Cons for this review - only because it would be hard for me to ever sell this gorgeous round! "Hard To Let It Go" would be the right term...so no actual Cons at all. What great images here to immerse yourself in...LOTS of fine detail, symbolism to decode...make sure you have a good magnifier to pick out all of the great artwork here! I have spent more time closely admiring this round than any others I have. For not a lot over spot you can have this impressive hefty 2oz round - NICE.

Awesome design!!!! and to the person who left the last review, the Weight and purity is stamped right on it!!!! It's right below the E in CARPE, ( 2 troy oz .999 fine silver)!!!!!!! Use a magnifier on this coin to see all the beautiful details, everything on this coin is small but so PERFECT!!!!!!!

More annoyed with myself for not inspecting closer. It's a beautiful piece but no where does it state weight or purity on the coin.