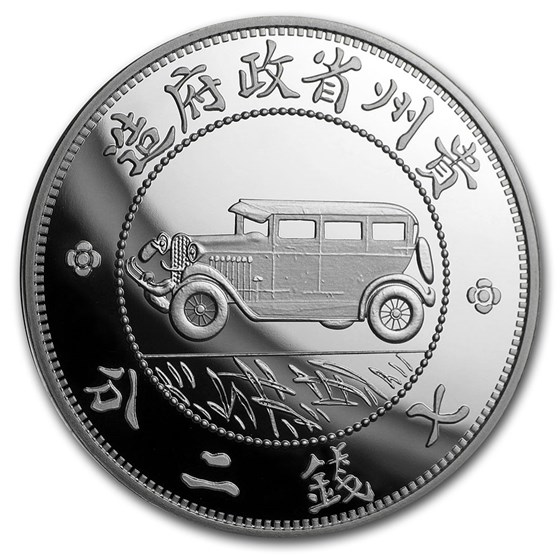 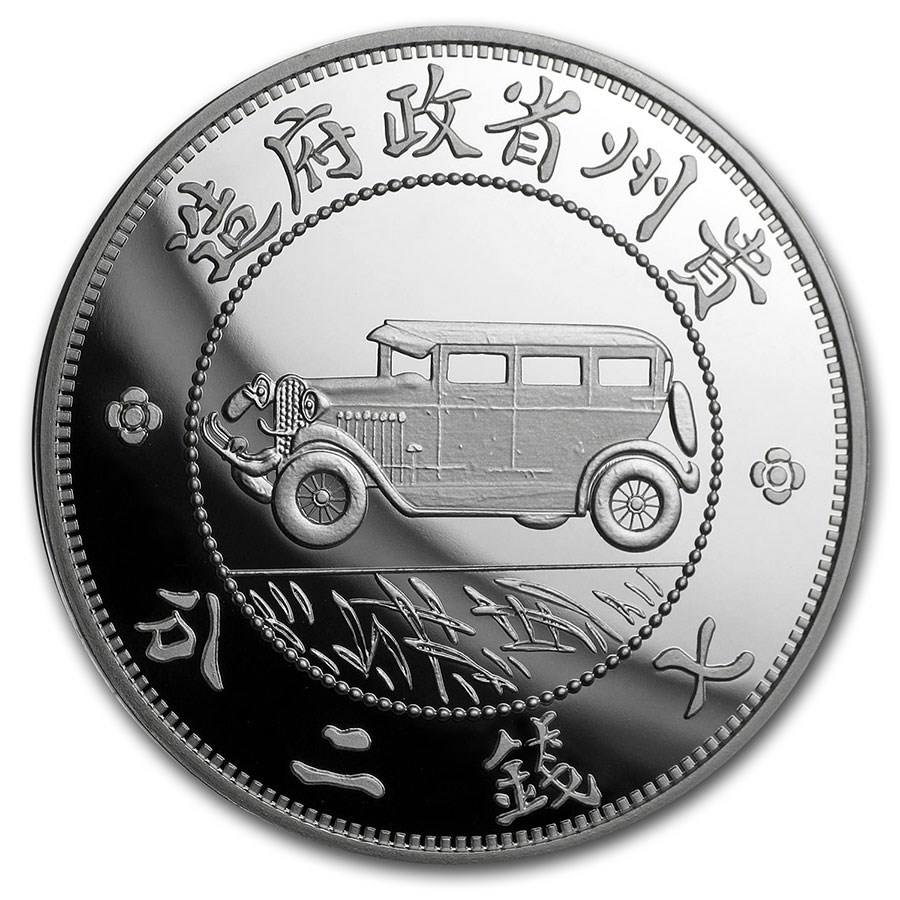 
In 1928, the warlord of Kweichow province, Zhou Xicheng, minted a coin to commemorate the completion of the Kweichow Provincial Highway, the first road in the province. Like many dictators before him in history, Zhou lived the high life while the people suffered. In a province without modern roads­, in a country without modern roads, ­­Zhou Xicheng owned a luxury automobile imported from the United States. It had been shipped to China, disassembled, carried on foot over the mountains to Kweichow, and reassembled in 1928.

Now that the car was built (the only car in the province), Zhou wanted to be able to drive it. To satisfy the warlord, a road was completed. Zhou wanted to commemorate the event with a Silver crown or dollar­-type coin. Initially Zhou wanted his picture on it. Not just that – he wanted his car on it, too. They informed him that if he put himself on the coin that he would be killed. Eventually Zhou relented and did not put his portrait on the coin. However, at some point before the coins were minted, Zhou decided he wanted to be on the coin after all, but instead of his image he hid his name in the grass under the car. If you tilt the coin 90° to the right so that the car looks like it’s going to take off like a rocket, the seemingly ­random-like patterns in the grass suddenly resemble Chinese characters. One year later, Zhou Xicheng made a name for himself by building roads in Kweichow province and a respectable one, too.

His death occurred when the warlord was driving his car, leading his troops on a march along the province’s first road. He sped ahead of his troops as they were unable to keep up because they were on foot; eventually, Zhou ends up separated from his soldiers. This was bad for any leader during a civil war. Well, the inevitable happens. Zhou is ambushed by rebel troops loyal to another warlord in a different province. He abandons his car and attempts to flee but was met at the hands of assassins, left to die by the side of the road he had once help build.

These are beautiful. Lucky to obtain when i did. It came as a recommendation. Imnglad i was open to the suggestion. Lets say the performance was better than i expected. Attractive design.

I am so glad that I decided to buy it. The picture doesn't do it any justice. It looks better in person. The old school cars were very boxy,but great quality. Somehow this coin shows off that period of time. Classic!!

The chinese have a special way with their Art. The coin is simply very nice. First coin of a 5 coin series. With a limit of 5K per coin. As an investment it's a No Brainer. I can't wait to see the other 4 coins in the series. The only drawback that I can see, is to make a profit, you have to sell the coin. Don't think I can part with it, knowing Ill never be able to a ford to replace it. I'm afraid it's another coin my children will fight over after I'm gone

I love modern chinese coins. Cause it always mint a proof like with out additional charge on us. The design is outstanding. And came with capsule for protection

Perfect as always & Pleasantly surprised by the Individually Numbered

Normally don't leave reviews, but wasn't expecting the Individual Numbering on the individual coins. Very Pleasantly Surprised, went to validate after reading the other review as it wasn't stated anywhere I could find in the description. A+++

The low mintage, arrived well packaged . Each coin is numbered and sealed in container and double vacuumed sealed open one from bags to inspect and admire.