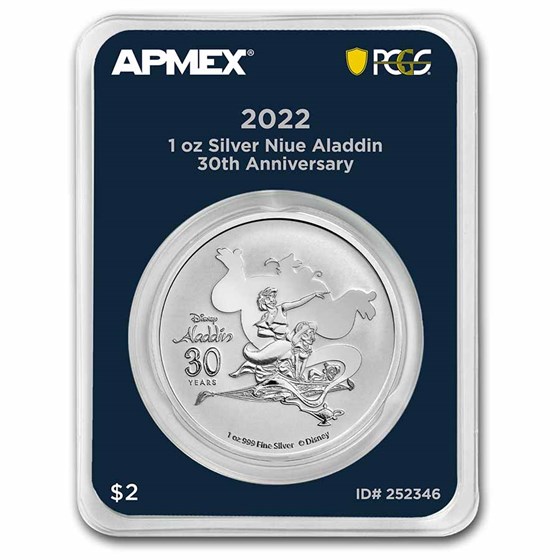 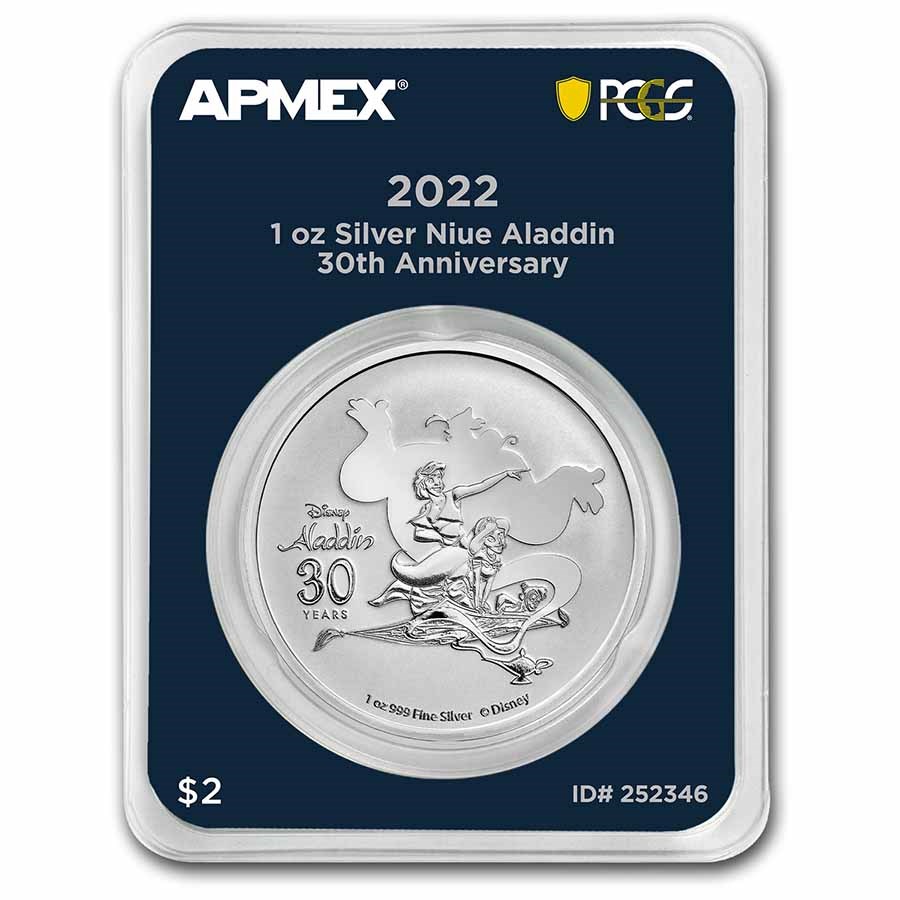 Product Details
Product Details
As low as $9.99 per coin over spot
Join Aladdin, Jasmine, Abu, Carpet and Genie with this unique low-mintage bullion Silver coin and celebrate the 30th anniversary. Guarantee your coins will receive FirstStrike® designation from PCGS with our APMEXclusive® MintDirect® Premier packaging.

MintDirect® Premier + PCGS FirstStrike®
The sealing process seals the coin within the authentication card, creating a tamper-evident package that will guarantee your investment indefinitely. After the process is completed, the coin in the tamper-evident package is removed from the machine and checked to ensure that the quality of the packaging meets our exacting standards. You now have a finished MintDirect® Premier + PCGS FirstStrike® 2022 Niue 1 oz Silver $2 Aladdin 30th Anniversary coin.

Disney's Aladdin 30th Anniversary
On November 11, 1992, Disney released Aladdin to theaters worldwide. The musical film would be the first animated feature to generate over half a billion in box office sales and become the highest-grossing animated film of all time before the release of The Lion King. Aladdin's delightful take on an Arab folktale combined with humor and catchy tunes made the film a treasure of entertainment. The song "A Whole New World" would win a Grammy for Song of the Year.

The titular character Aladdin begins as a lowly "street rat" of the desert city of Agrabah where he unwittingly gets drawn into a plot of the scheming royal vizier, Jafar. He had intended to use Aladdin to gain entry into the Cave of Wonders to obtain the magical lamp of the Genie. Aladdin's monkey Abu can't resist the forbidden treasures, which leads to dire consequences, but not before Aladdin is able to retrieve the magic lamp. Jafar, still disguised as an old man, demands that Aladdin throw him the lamp before he'll help him out of the collapsing Cave of Wonders.

He then betrays Aladdin to his doom while keeping the lamp. Yet, unbeknownst to him, Abu stole it back. Within the darkness of the cave, Aladdin inadvertently wakes the Genie who brings the zany antics and manic energy of his voice actor Robin Williams into the duration of the film. The movie then proceeds to become a romance as Aladdin uses the Genie's powers to endear himself to the lovely princess Jasmine. In the process, he will eventually uncover Jafar's plot for power and use his wits to save the day. Commemorate this Disney classic with this highly detailed bullion Silver coin.