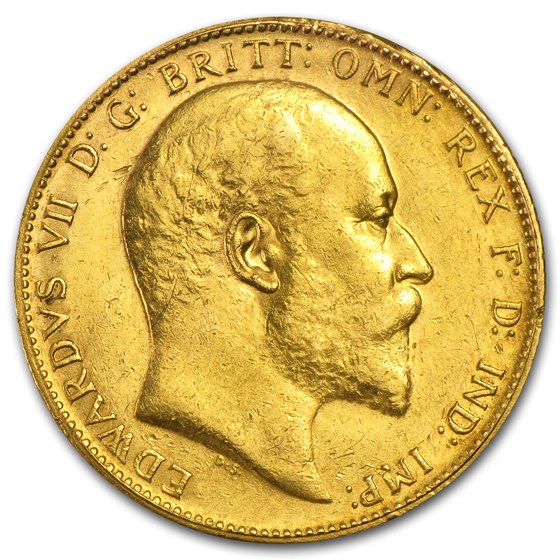 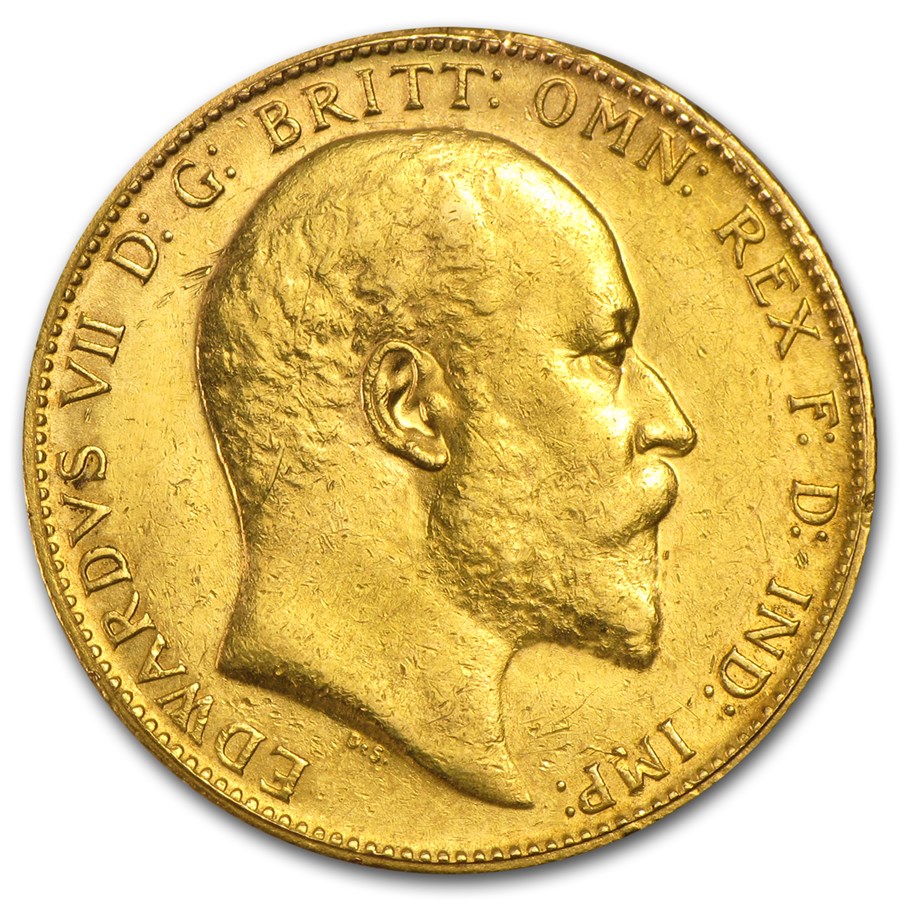 Product Details
Product Details
Gold Sovereigns from the reign of King Edward VII are dated 1902-1910 and are not encountered nearly as often as succeeding monarchs George V or Elizabeth II.

Dates you receive will be randomly selected and are determined by stock on hand.

Well before designing these sovereign Edward VII Gold coins as chief engraver at the Royal Mint, Benedetto Pistrucci earned a living carving cameos and engraving gems in Rome. Once he moved to London in 1815, hardly any time passed before he had established himself once again as a leading cameo designer, and this led to his appointment as chief engraver. Pistrucci’s design of these Gold coins represented a new approach to traditional British coin design, and many feel his design may have been influenced by classical Greece marble carvings. Buy these Gold coins, and then browse our inventory to find other British coins with Pistrucci’s St. George rendering to add to your coin collection.

When investing in these Gold sovereign coins, how does their value measure up against paper currency?

Many investors compare Gold coins to paper currency, and arrive at the point of view that Gold is the better choice in terms of value. “As Gold coins has risen in value over the last decade, the U.S. dollar has declined,” according to an article from Money Crashers. This pattern makes Gold coins and other Gold holdings more valuable to own. Diversifying your portfolio by buying Gold and other Precious Metal products is considered by many financial planners to be a wise plan for preserving wealth when the economy falters.

The history of the Edward VII Gold coins

These sovereign Edward VII Gold coins were minted to pay tribute to King Edward VII who acceded to the throne in 1901. Though the decree calling for production of the Gold coins was made at the end of 1901, these coins were not issued until 1902. The obverse of these Gold coins features a portrait of Edward VII, while the reverse features an artistic rendering by Benedetto Pistrucci of St. George slaying a dragon. Production of these coins ceased in 1910 due to the death of the King.

Why invest in sovereign Gold coins?

Buying sovereign Edward VII Gold coins issued by the Royal Mint is considered by many to be one of the best ways to invest in Gold. The price of Gold tends to move independently of the stock market, making the Precious Metal ideal for creating a hedge against inflation. The low premium over the Gold spot price makes it easier to increase your Gold holdings, and balance out your portfolio with these .9167 fine Gold coins. Some investors buy Gold coins such as these because they have historic significance that enhances their value.

"From Russia With Love" is its most famous publicity, and these timeless beauties are one of the very best. History, money, beauty, this coin has it all, and is universally recognized as MONEY!

Both interesting and efficient

These older British Sovereigns are fun to collect due to the variety available and history behnd them. Of course the condition of circulated coinage can vary. The price premium above spot price is not excessive. I like the quarter ounce denomination from a price point perspective.