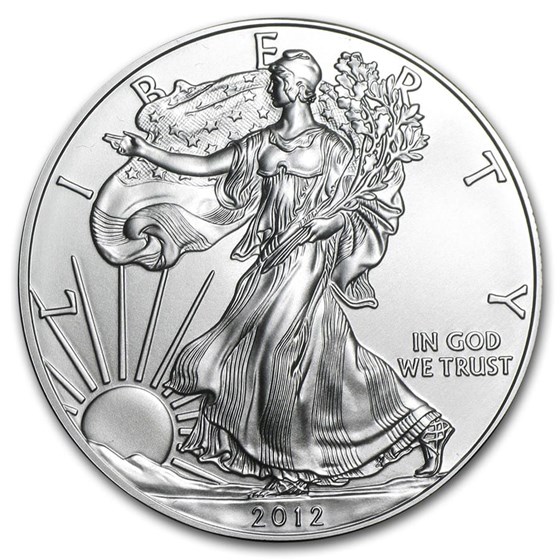 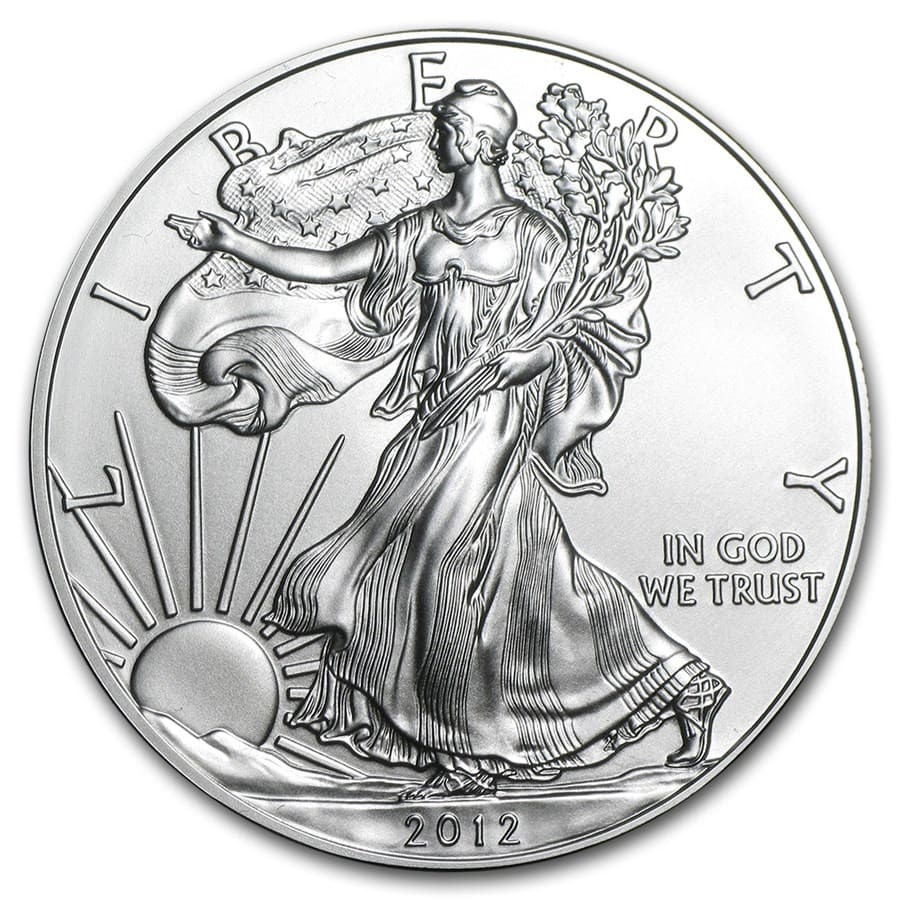 Product Details
Product Details
The 26th issue from the annual American Silver Eagle program by the U.S. Mint displays one of the most popular and beloved designs in American coinage. The iconic design and .999 fine Silver content further adds to its bullion appeal.

One of the most popular designs in American coinage, the Silver Eagle combines beauty with Silver bullion appeal. Add the 2012 Silver Eagle to your cart today!

History of the American Silver Eagle Program
The U.S. Mint attempted to establish selling Silver bullion in the 1970s and early 1980s to help reduce the Defense National Stockpile. The reasoning was that domestic needs exceeded that of strategic needs. Many refiners had actually opposed the plan due to concerns of diminishing the need of in-state mining and possible reduction of Silver spot at the time. Throughout the back-and-forth, the United States did end up selling off large amounts of Silver (roughly 105 million troy ounces) but not as coin, as they had originally intended. When this happened, it did in fact cause the price of Silver to drop immediately. Many traders started unloading futures with the anticipation that price would fall, which it did. Over a span of several years and suspensions, it wasn’t until June 21, 1985, that the Senate finally agreed to an amendment by a voice vote. The amended bill was signed by President Ronald Reagan on July 9, 1985. The bill, know as the “Liberty Coin Act” authorized the law of the American Silver Eagle program with an effective date of October 1, 1985, but came with stipulations that no coins may be struck or sold until September 1, 1986. Finally, after all of this, the first American Silver Eagle was released on November 24, 1986, and has gone on to become one of the most beloved, best-selling coins in the world.

NOTE: The coins you receive may exhibit some level of natural toning and/or oxidation such as spotting. This is a normal process that and can occur over time when exposed to hydrogen sulfide, which is naturally occurring in the air.

Store your U.S. Silver Eagles at Citadel, where you can track holdings.

To protect your 2012 Silver Eagle coins or any other Precious Metals, use Citadel Global Depository Services, a wholly owned subsidiary of APMEX. Those 1 oz Silver Eagle coins take up a lot of space, but Citadel will keep them separate from other holdings while also protecting the bullion against theft, damage or loss. Silver coin prices can vary quickly, and Citadel offers tracking and management tools online as well as free delivery on demand when you are ready to sell. When you purchase U.S. Silver Eagles or any other valuable coins available at APMEX, Citadel will ship your holdings to its vaults at no cost.

The Silver Eagle coin carries a face value of $1, though the intrinsic Silver value far exceeds that amount.

The history of U.S. Silver Eagles

The 1 oz Silver Eagle is legal U.S. currency, but these Silver coins are typically not used as currency because their value in Silver far exceeds their face value. Silver coin prices began exceeding the face value of these coins in the 1960s when the Silver spot price dramatically climbed on the world markets, and in 1965, the U.S. began making coins with less Silver. In 1985, U.S. Silver Eagles were authorized by the Liberty Coin Act, as offered investment-grade Silver that can be traded. The 2012 Silver coins from that act are .999 fine Silver, as opposed to the pre-1965 coins that were generally .900 fine Silver.

Why invest in U.S. Silver Eagles?

U.S. Silver Eagles are authorized by the U.S. government, meaning their creation was specified by an act of Congress, which offers another level of assurances of the quality of these investment-grade coins. These 2012 Silver coins meet exact specifications for purity, size and weight that are laid down in law. A 1 oz Silver Eagle will always be the same weight and fineness, no matter the year or which U.S. Mint it was produced at, so you always know exactly what you are getting. The premium with U.S. Silver coin prices reflects that coins created by the U.S. Mint are guaranteed, an important insurance for investors.

Can't go wrong with silver eagles, a good store of wealth to sock away for the future.

I am happy with my first purchase from APMEX even though I'm a long time collector of Silver eagles. While this coin did not arrive in a flip like the others in my order, it did arrive safely and is a beautiful addition to complete my book.

Most of the coins I received in my order were BU as described, but this coin was pretty dinged up. Bad luck?

Merchant response: Thank you for your feedback. We are sorry to hear that the 2012 coin did not meet BU expectations. We will contact you shortly to process a replacement.

Received my Silver Eagle quickly. I've always loved the design of the ASE and will continue to buy more. APMEX has never disappointed me with my orders and delivery is always quick.

Eagle came in as advertised. Definite BU and arrived in timely manner. Thank you APMEX for another great purchase.

APMEX must hand pick these gems!

This was AE #16 in my collection and a true gem - came back from NGC with an MS69 - it doesn't get much better than that. APMEX has my AE and other bullion coin business for life now. :)