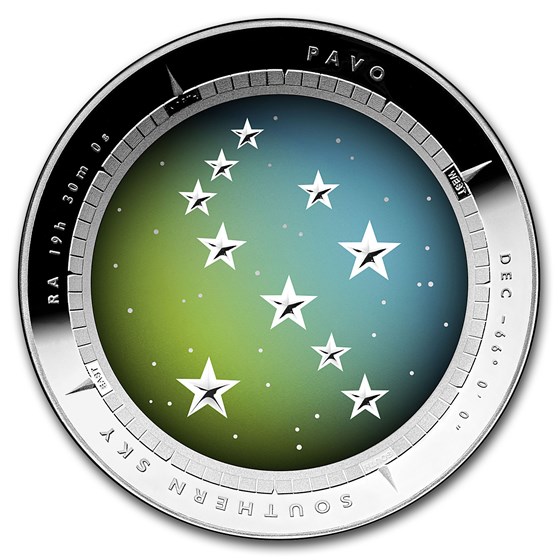 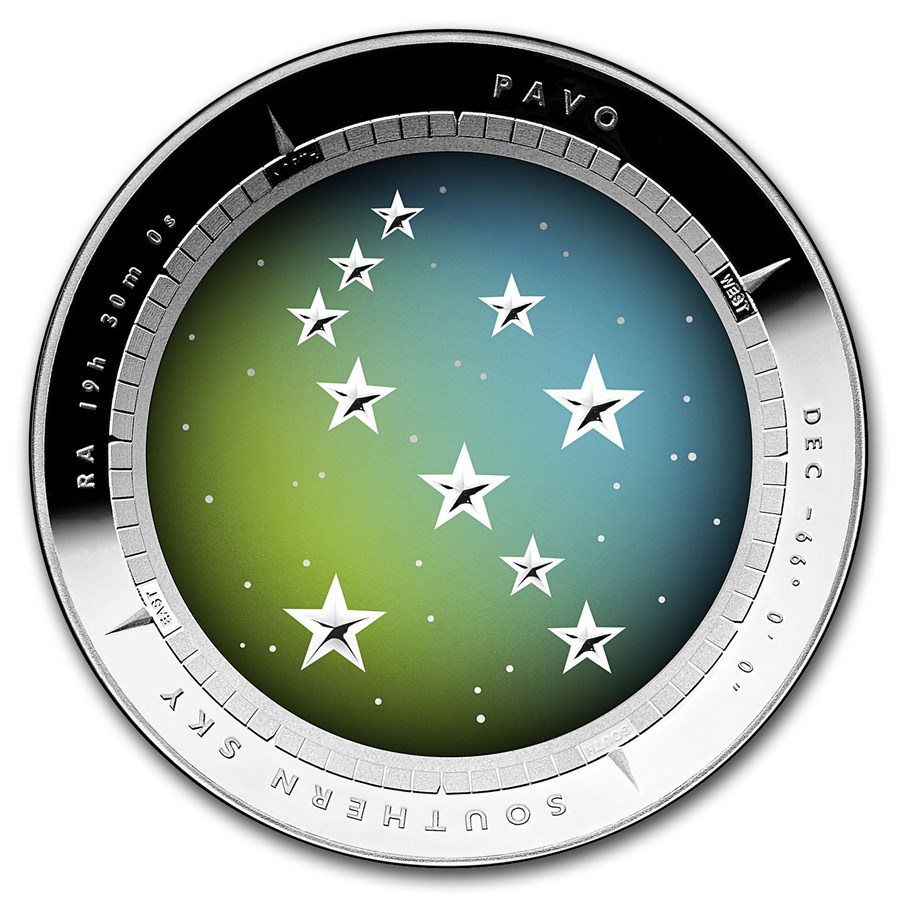 Product Details
Product Details
With a mintage of 10,000 coins, this brilliant 2013 Pavo coin is the second release in the popular award-winning series and is officially sold out at the mint.

Coin Highlights:
The Royal Australian Mint has once again produced a coin enjoyed by all! Add the $5 Color Domed Southern Sky Pavo concave coin to your cart today!

First described in 1598 by Dutch astronomer Petrus Plancius, the Pavo constellation is most visible in August. Often referred to as a "Peacock", it is beautifully depicted on this unique domed coin and is the second release in the Award Winning Southern Sky series. The 2012 issue won the 2014 Coin of the Year for Best Crown.

Nice coin, but not what I really thought

I knew when I bought it that the image is concave, but I really thought it should be convex since the description reads "domed". I think most people would think that. It is a nice idea, but I would have made it convex with the same image and some nice glass - that would have been fantastic. Considering all these kinds of coins are supposed to be collectable, but who knows if they really are - I think it's a bit expensive. I just bought two. If it was truly domed and maybe $75 or so - I would buy a lot more.

Brought this on a whim after searching for coins to expand my silver collection. The coin is spotless, and the design is pretty unique (colored background constellations on a concave coin? I'm sold!). The low mintage is nice too, and with those factors, the value of this coin keeps going up, so that's especially good too considering the value of silver at the time of this writing. This is my first RAM coin, but if others are like this, I'm definitely interested in acquiring more.

I really hold only a handful of silver collectable coins minted by the Royal Australian Mint as most of my Australian minted coins are from the Perth mint. However, every coin I own that was produced by the RAM are near flawless, this one is no exception. Even though I have a small sample of coins (7) from RAM, it seems their quality standards are higher than some other world mints. Maybe they don't release as many with visible distractions on them Regarding this Pavo constellation coin, there is nothing overly spectacular in it's design, but the concept of them designing "Star Constellations" on curved highly mirrored surfaced coins is enough for me. Not sure I'll try to obtain the other 2 issues of this series, especially when the first release ("Crux") is being offered with a fairly big premium to initial price.

Very Cool/Unque Design. Might not be easy to sell, but I would want to keep this for my own collection anyways.