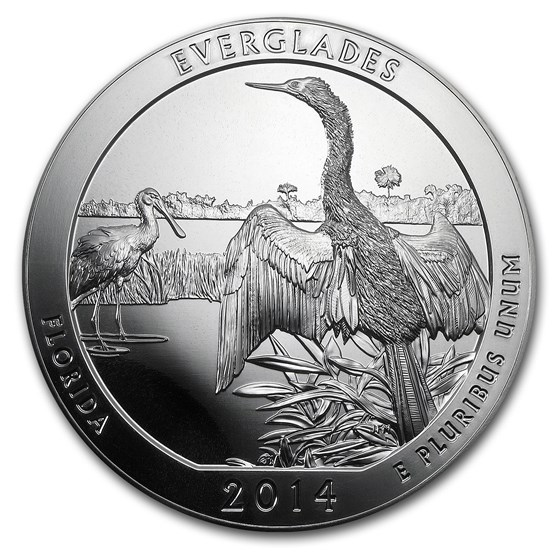 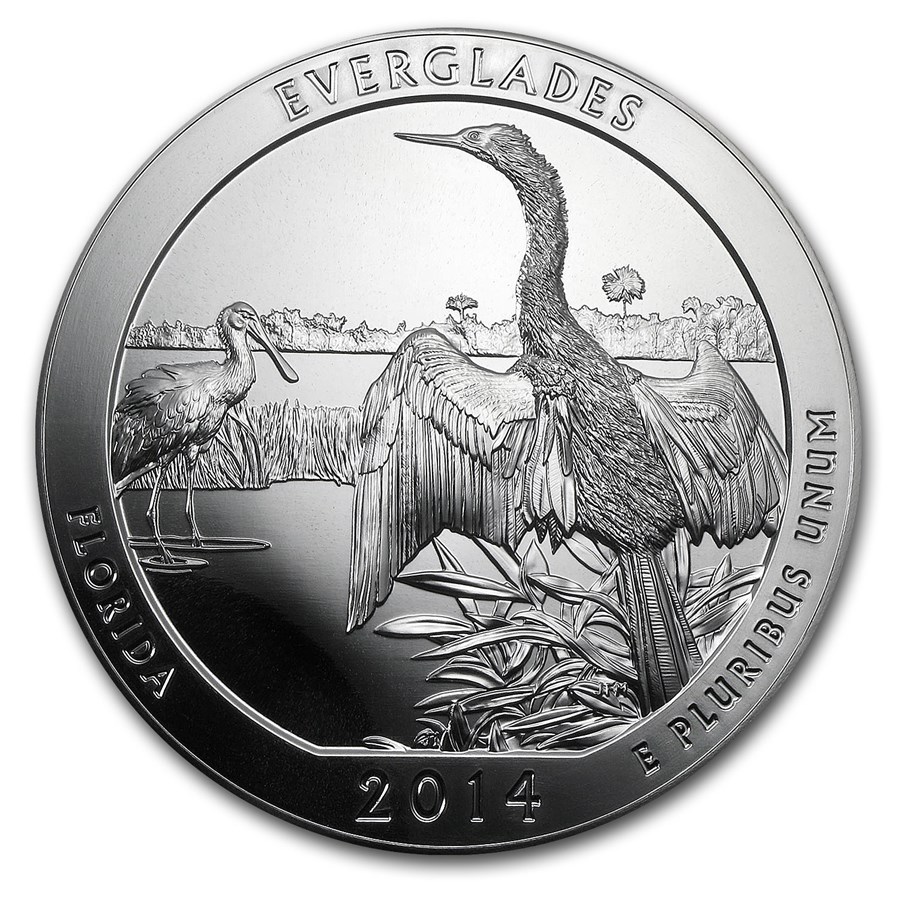 Product Details
Product Details
The Florida Everglades is the largest tropical wilderness in the United States, and this fifth 2014 release of the U.S. Mint's America the Beautiful series honors this unique landscape, which is home to 36 threatened or protected species.

The Everglades consists of 1.5 million acres of sawgrass, mangrove forests and wetlands. It is also a habitat to endangered and exotic wildlife, such as the Florida panther and the American crocodile. The Everglades is also home to a wide variety of species including small game, fish, turtles, frogs, shellfish, alligators and the Burmese python, which competes with the alligator at the top of the food chain.

This is a beautiful, comically giant coin that came in a protective capsule. It arrived in perfect shape, no issues.

This is an outstanding way to own silver and collect a beautiful set of coins at the same time. As always, APMEX handled the entire transaction flawlessly. I'll be back as I've been for years.

One of the nation's most exciting wildlife refuges.

A nice design from this series

This is one of the nicer designs from 2014 and a pretty well known park compared to some. A little higher mintage than other 2014's, it probably won't go up in value as much as other (Arches has done quite well), but I got it on a decent sale at APMEX, so I think I should be fine. Like most ATB's it comes from the mint a little dusty looking, but there is a lot of detail with the birds on these that comes out looking great.

The design is super attractive even on a tiny quarter, which is where I saw it first. The appearance on this huge silver coin is stunning. In my opinion it is the prettiest one yet. There is an almost prehistoric feeling coming off of it.

These 5 OZ US Mint, low mintage, pure silver coins are substantial; if you've never held a 5oz coin in your hand, it really lets you know this is a big hunk o'metal. The part I really like in this coin, is you get a beautiful piece of art that anyone can appreciate, hold, and value for multiple reasons. The only downside is these coins scratch/scuff easily! Try to hold just the sides (they are big enough) gently clean any oil stain with microfiber, or something softer if you know of anything softer.

having spent many years in the Everglades with friends, my husband loved this item. Great for Everglades people.

Beautiful coin , been waiting for these.

Been waiting for these to be available. It`s a beautiful coin and addition to my collection. Thanks APMEX.