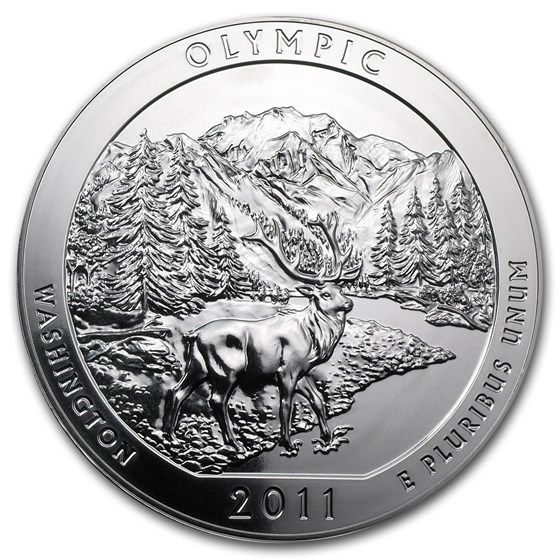 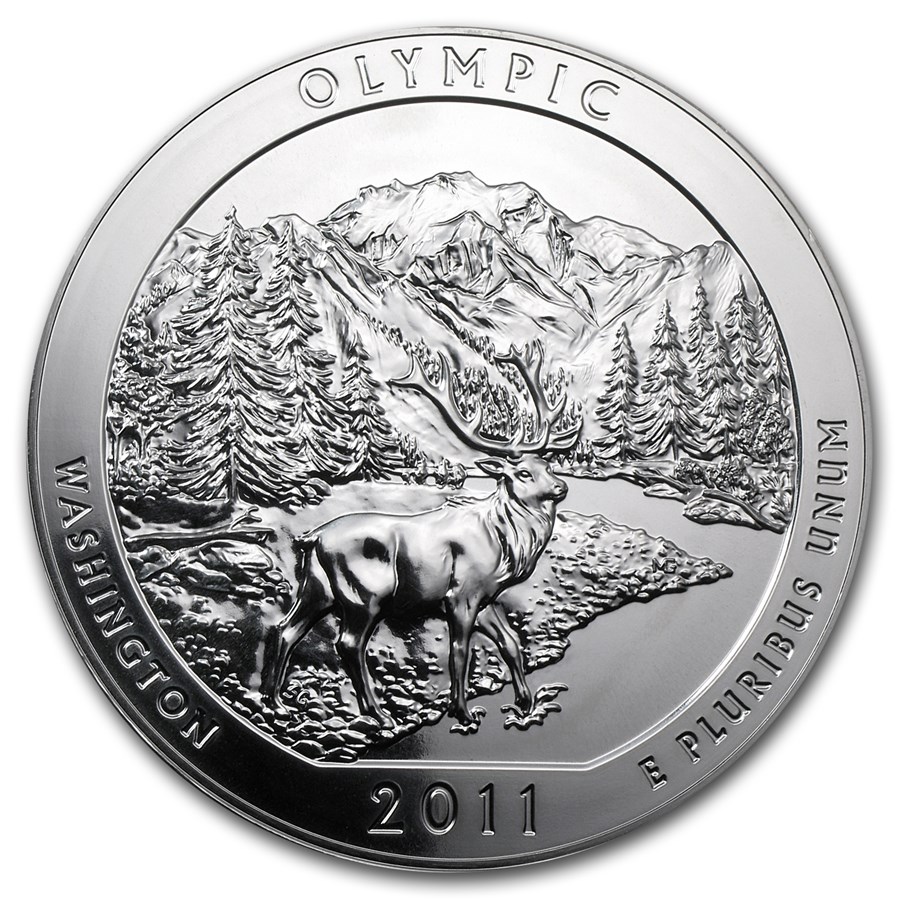 The beauty has been captured on this impressive coin, containing 5 oz of .999 fine Silver.

Coin Highlights:
Add a beautiful display box to your cart to display your Silver ATB in style.

These popular and highly collectible 5 oz America the Beautiful Silver Bullion Coin series have captured the imagination of investors and collectors alike. Add this great looking coin to your collection today!

I've been collecting these America the Beautiful Coins, starting with places I have actually visited, with Olympic National Park being one of them. If you are ever in the Pacific Northwest, take the time and drive up there, every turn is a postcard worthy view. This coin is huge at 5 ounces and the detail is very fine. Mount Olympus in the background with the Roosevelt Elk in the foreground captures the place very well. This coin is one of my favorite coins in my collection! The one I received from APMEX was sealed in a plastic bag and was also in an AirTite container that fit perfectly. All in all, ATB is a great series and this one is a winner!

This is just the second of these in this series I've purchased. Just simply beautiful, that's all I can say.

Great coin at a great price. Another Apmex winner.

One of my favorite parks to go for a hike in, i thought this would be a cool way of adding 5 oz. I was really excited about this. The coin i received has seen some better days, it clearly spend quite a bit of time outside its case. There are scratches here and there with a big gouge near washingtons nose (looks like he just sneezed) and i can't even tell whats going on in his hair. There what appears to be sand and cat hair inside the case. This is the first purchase i've been disappointed with from APMEX. One of the reasons i was worried about switching from brick and mortar to online purchases. If it was in advertised condition or i had paid less for its poor conditon this would definetly have been a five star purchase.

Merchant response: Mark: Bottom line, not acceptable. We have processes in place to make sure this doesn't happen. Our customer service team is reaching out to you to give you the option to exchange your coin at no cost and little hassle to you. Once again, we truly apologize for this and hope that you give us another shot to make it right. If you ever have any issues or questions you can contact us at 800-375-9006.

This is my favorite coin. I would love to get another, I was stationed right down the road from Olympic national park in the military, very beautiful place and the coin is just as nice.

Love the 5oz coins.. looking forward to completing this collection in the coming years...

These are great looking coins and since i did not buy a tube full they came with capsules. I have been able to rely on quality from Apmex and I know they stand behind their products. Thanks for the reasonable price and great service.

I bought this coin because I enjoy the Olympic national park. It has great detail.