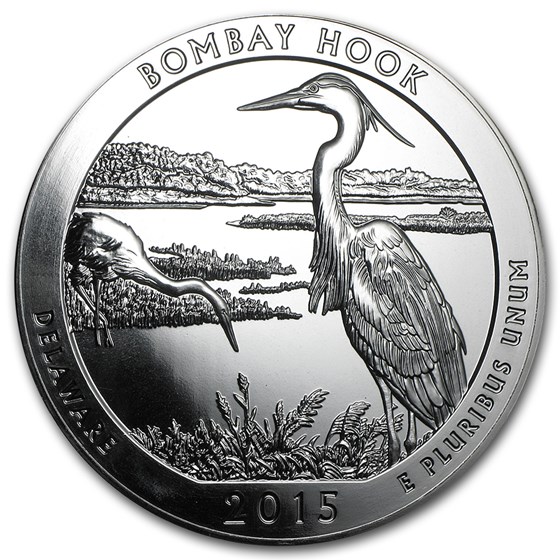 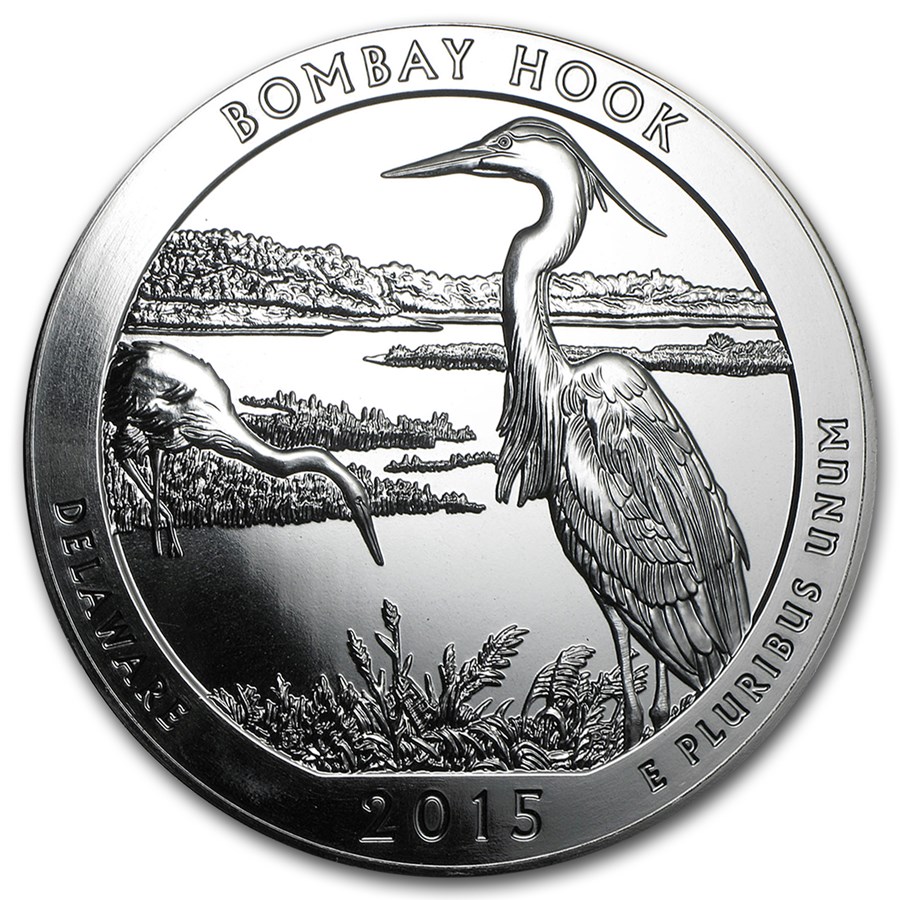 Your purchase is guaranteed to match the quality of the product shown. It will not be this exact item.
Product Details
Product Details
From the highly celebrated America The Beautiful 5 oz Silver Coin Series comes the Beautiful Bombay Hook National Wildlife Refuge depicted on the 4th release in 2015.

These coins are sought after by investors for their consistent premium appreciation, and demanded by collectors for their artistic value. Add this attractive 2015 5 oz Silver Bombay Hook National Park coin to your collection today!

U.S. Silver coins have beauty and collectibility to add to their value.

U.S. Silver coins come in a variety of series to tempt collectors, and the large bullion America the Beautiful series is a particularly intriguing set. The 2015 Silver bullion run offers five state designs in the sixth year of a planned 12-year run of coins, making a great addition to your collection. The 5 oz Silver coin prices reflect both the value of U.S. Silver coins and the appreciation for the artistry and historical significance of the designs. These Silver coins are beautiful pieces of fine art in lasting Precious Metal.

Track 5 oz Silver coin prices and other bullion prices with a free tool.

Why invest in U.S. Silver coins?

Besides U.S. Silver coins, you can also invest in Silver through bars or rounds, but there are advantages to investing in U.S. coins. One difference between 2015 Silver bullion coins and Silver bars is that coins are legal tender and are backed by the issuing government. Silver coins for sale are often more valuable than Silver rounds for the same reason, even though the Silver bullion products often have similar designs. The 5 oz Silver coin prices also reflect a potential for collectibility as well as investment, while bars and rounds typically are purchased as investment-grade bullion only.

Visible Scratch and Damage on Coins

Merchant response: We're sorry these items did not meet expectations. Our post-shipment team will contact you shortly.

Another beautiful coin in this unique series! Not only a great set of coins to honor our Country's national parks, but a great way to own silver -- win-win all the way! Secure discreet packaging from APMEX as always!

These are a great value as long as you jump on them early when they first are released.

I bought the first one as a lark. You know 5 oz's of silver. Got hooked on the series now, oh well beats sitting in the tavern.

I won't go on and on about this coin like I do a lot,but I will just say I am a sucker for any and all types of animals and to have them on coins like this makes it twice as nice,and I can't recommend this enough so I suggest buying it.Thanks.

A good buy with a reasonable premium

I like to purchase each of these 5 oz beauties as they first come out. If you wait too long the premiums seem to go up pretty fast.I am very pleased with this product. It came to me well packaged and in excellent shape. Thanks Apmex.

Great design on this coin and I got a great deal by pre-ordering. APMEX is one of the few dealers that still include an air-tite.