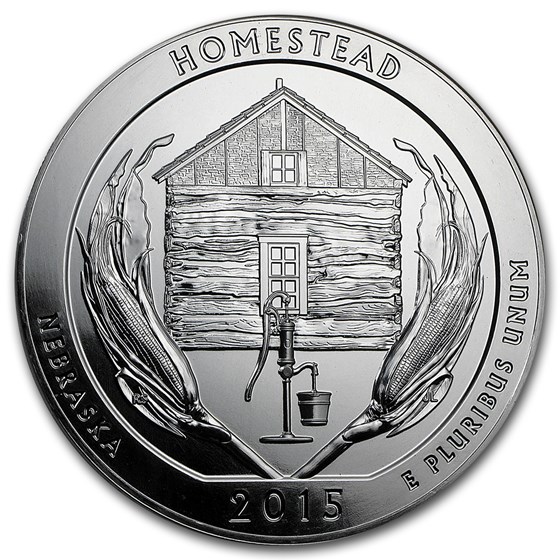 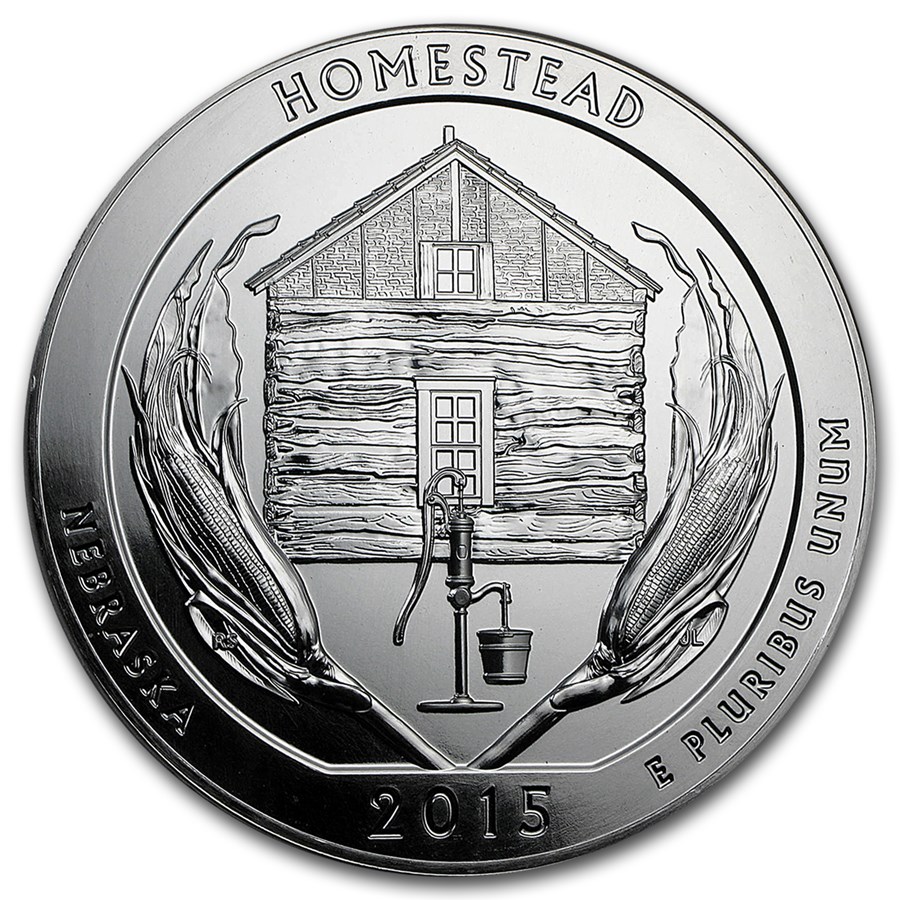 Your purchase is guaranteed to match the quality of the product shown. It will not be this exact item.
Product Details
Product Details
The Homestead Act of 1863 was integral in getting the western parts of the United States populated, and this 5 oz .999 fine Silver coin pays tribute to this important time in America's history.

Coin Highlights:
Protect your Silver ATB coin in style by adding a beautifully display box to your cart.

U.S. Silver coins are made by the sovereign mint of the United States, which offers some extra securities. The America the Beautiful 5 oz Silver bullion created by the U.S. Mint is U.S. currency, meaning there are legal requirements for weight, purity and the amount of Precious Metals minted. The 2015 Silver coin prices also reflect collectibility value that comes with coins and is generally not present for Silver bars or Silver rounds. Silver coins for sale from sovereign mints such as the U.S. Mint, Royal Canadian Mint and Perth Mint are of a reliable high production value for beautifully detailed coins.

The collectibility of U.S. Mint Silver coins is considered differently than Silver rounds or bars.

U.S. Silver coins such as the America the Beautiful coins are said to have numismatic value, which means collector value specific to coins, paper currency and medals. Other Silver bullion like Silver rounds and Silver bars which are typically minted at private mints can have collector value but would never be considered to have numismatic value. Silver coins also typically have higher collector value because the Silver bullion coins often have more detailed designs and usually have a face value that adds to the desirability. The 2015 Silver coin prices for these coin reflect the numismatic value of these coins as well as the spot price of Silver and costs for fabrication, distribution and nominal dealer fees.

Why invest in America the Beautiful 5 oz Silver bullion?

In my opinion buildings in the design elements create a nice piece.

Purchased all 5 -5 oz silver Park collector series for 2015. Arrived in perfect condition -Wiill buy 2016 series -Long time customer -Never had an issue with any of my purchases!

Very popular series with Low. A true bargain at less then $5 over spot.

to get the complete collection of this year release of items

This is another nice coin. I enjoy looking at it, came in an air tight capsule.No problems with this piece. Apmex does a fine job packaging as always.

Nice clean well struck coins. Great for investment plus they are beautiful to look at.

Beautiful set and a great way to own silver. As always, product and shipping were second to none.

too high of a premium