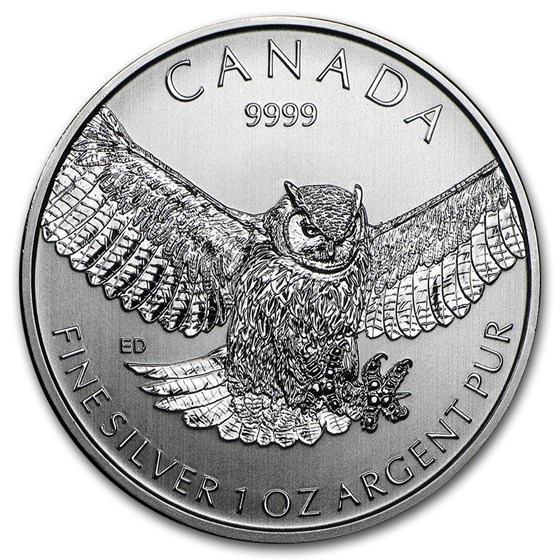 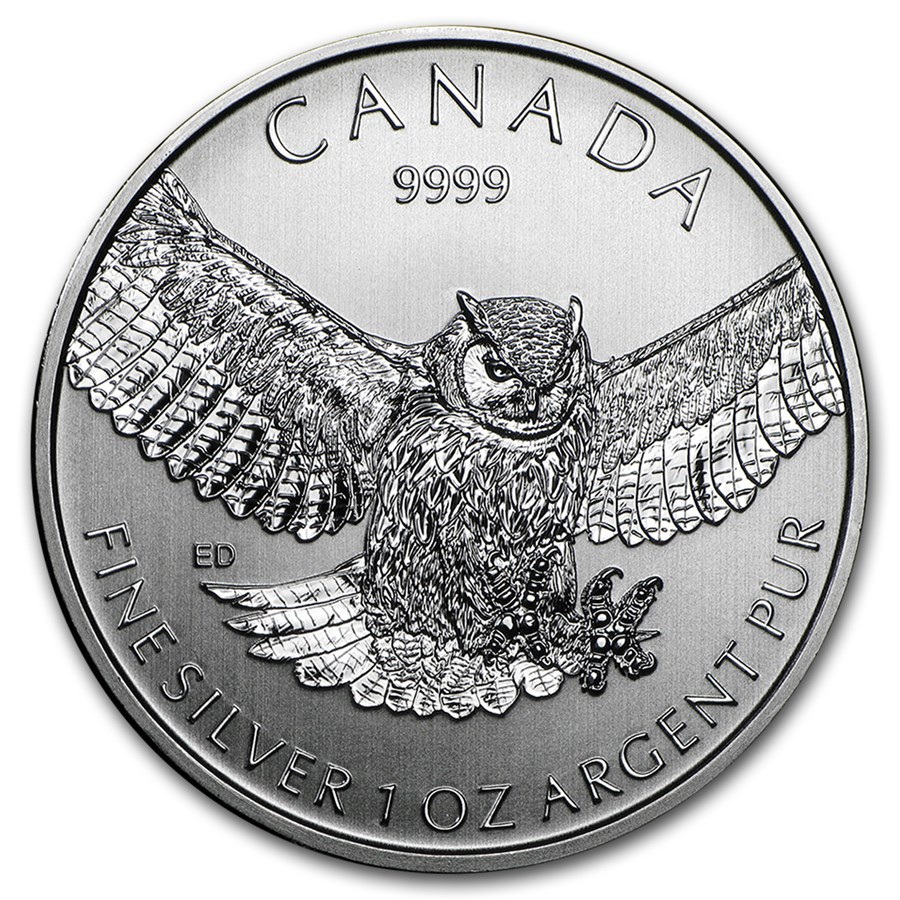 Your purchase will match the quality of the product shown.
Product Details
Product Details
In stock and ready to ship! The Royal Canadian Mint's Birds of Prey series comes to a conclusion with this spectacular design featuring a Great Horned Owl. Each .9999 fine Silver coin beautifully showcases this unique species found across North America.

Coin Highlights:
Protect your Silver Owl in style by adding an attractive display box to your order.

The 2015 Great Horned Owl is the last installment of the Royal Canadian Mint's four-coin 1 oz Silver Canadian Birds of Prey series, which will have a maximum mintage of one million coins each. Add this 1 oz Great Horned Owl coin to your cart today!

As Canada’s most common bird of prey, the great horned owl (Bubo virginianus) is a symbol of power and agility, with unique features that lend themselves beautifully to this engraved portrait.

Purchase this 2015 Silver coin, and you will marvel over illustrator and designer Emily Damstra’s spellbinding depiction of a great-horned owl. The intricate details on this Silver Birds of Prey coin elevate coin design to a new level, and she demonstrates this same level of artistry on her other coin designs. The Silver coin that she received an award for was the 2014 1 oz Silver Maple Canopy: Autumn Allure, which won the “Best Crown” category award from the 2016 Coin of the Year Awards, sponsored by Krause Publications. Other Silver coins for sale that she has designed for the Royal Canadian Mint include the 2016 Canadian Proof Red Tailed Hawk Silver coin and the 2016 Canadian 1/2 oz Silver Hare.

Invest in Silver coins made from a Precious Metal in demand for green technologies.

When you buy these 2015 Silver coins, you most likely are not thinking about the Precious Metal’s ability to reflect light and naturally sterilize. Silver prices tend to increase when demand increases, and new uses for Silver are likely to increase the demand for the Precious Metal. Silver is also used in green technologies like solar energy, where Silver is used in photovoltaic cells. Silver, as in Silver bullion, is also starting to be used in fabrics, carpets and more to naturally kill harmful bacteria and germs, rather than use harsh cleaning chemicals.

The history of this 2015 Silver coin

This Birds of Prey 2015 coin is the final issue from this popular series that the Royal Canadian Mint introduced to the market in 2014. With two 1 oz Silver coins released in 2014, and two Silver coins released in 2015, this is one of the shorter series offered by the mint. Each Silver Birds of Prey coin features a different bird of prey, including the bald eagle, peregrine falcon, red-tailed hawk and the great-horned owl, as seen on this Silver coin. These Silver coins are appealing to both Silver bullion investors and coin collectors.

Why invest in 1 oz Silver bullion?

Though many buy these 2015 Great Horned Owl coins for collecting, these Silver coins are also ideal for investing. Silver, as used in these Silver Birds of Prey coins, has a history of being considered valuable, and no matter where you are in the world, there will always be a market for Silver. Many investors choose these 1 oz Silver bullion coins because the Canadian government guarantees the coins for their weight and purity, helping investors to feel secure in their choice of investment. With a lower premium over spot price of Silver, investors can buy as few or as many Silver coins as their budget allows.

As a lover of the birds series, the owl is 1 of my favs. Condition is great, just wish the owl had more detail. Great for gifts & to add to your collection.

I love the hole series i've added them all to my collection ,they are truly beautiful ,I love all animal coins and these are a must have for any collection

Arrived quickly and met all expectations.

This was my first order for APMEX, Have been buying from another company. I must say I'm very satisfy with the service, fast shipment, easy to order, and my collection of silver that I order just not the Owl but my other items are spot on, perfect condition and very happy with what I ordered. I will continue doing business with APMEX. My dad whom passed away three years ago from this date invested in gold and silver over 30 years and I'm happy to continue to invest for him and for my future. Thank you APMEX.

I purchased this coin to add some of Bird of Prey Series to my collection and being a fan of Canadian coins. The coin arrived in a flip. The coin is in perfect condition with no marks. The detail is great. This is a stunning coin. I am glad I was able to add this coin to my collection, with my others. APMEX delivered fast and secure. Buy with confidence.

Best of the Series

IMO, this is the prettiest coin of the series. I swear it looks like a proof. Thanks!

i will be buying more of these exceptional

Great coin to add to my collection! I would highly recommend!