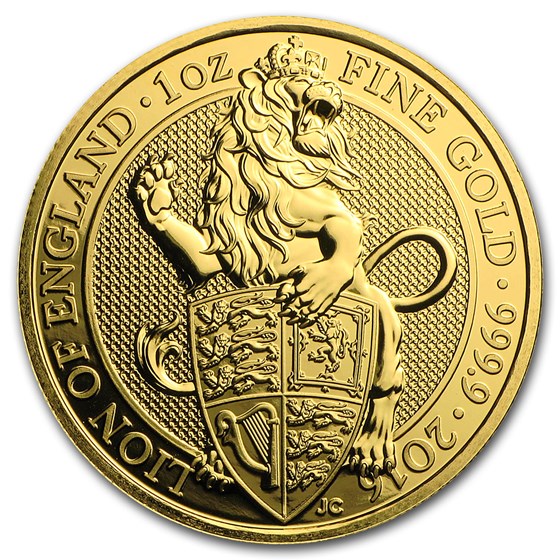 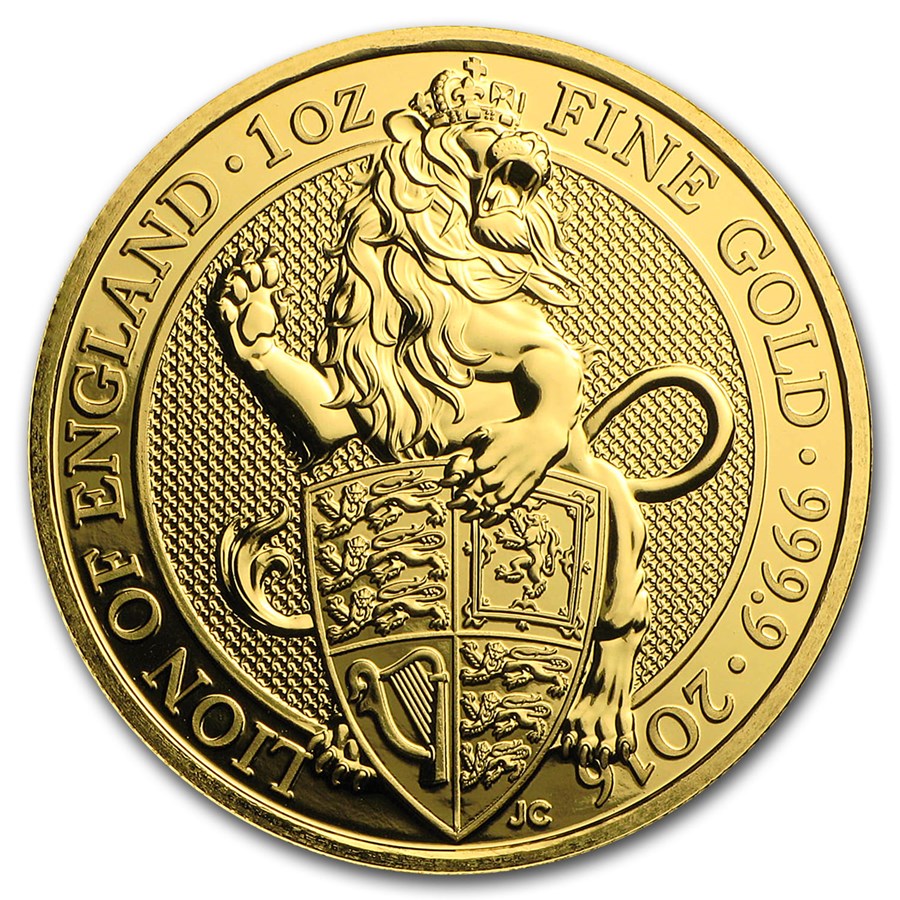 Product Details
Product Details
The first release in an exciting 10-coin series! The Queen’s Beasts celebrates the British Monarchy and the centuries of fascinating heraldry that has been a part of their story.

Coin Highlights:
Display your 1 oz Gold Queen's Beasts: The Lion in style by adding an attractive display box to your order.

Add the first coin of this exciting 10-coin series to your cart today!

Of the 10 beasts that were sculpted and stood watch over the Queen's coronation in 1953, the lion is the most familiar. The lion is crowned, and has been a supporter of the Royal Arms since 1603. The lion is an important animal to the history of England and its leadership. It is fitting that the 1 oz Gold coin depicts the lion and its long detailed history to the country. Buy your Queen's Beast Gold coins today and diversify your portfolio.

The Queen's Beast Gold coins can diversify your Gold portfolio. It is a unique series from the Royal British Mint and the 1 oz Gold bullion coins are low mintage, high in quality and is recognizable to many numismatic collectors and investors throughout the world. The history that is depicted on the British Gold coin dates back to the time of Richard the Lionheart. The heraldic lion has been England's national animal for generations. You can own a symbol of England's legacy today.

The shield that protects the lion on the design depicts the Arms of the United Kingdom, first commissioned in 1937.

The 2016 Great Britain 1 oz Gold Queen's Beast coin is a popular coin produced by the Royal British Mint. These Gold coins hold value and is sought after by people all over the world. It is the first release of a 10-coin release. The limited mintage coin was originally released in March 2016, but it sold out, not available again until June 2016. You can buy these 1 oz Gold bullion coins today from APMEX at competitive prices.

One of my Favorites!

A must have if you collect British coins! This is my favorite coin out the the series thus far for the Queens Beasts.

Can't wait for rest of the set

beautiful coin, seven designs in set, only three available so far; i wish they would be released faster than once a year.

This is a beautiful coin! I hope I can get more in this series. If you're going to invest in gold coins, they might as well be pretty! APMEX is always so easy to deal with. First rate customer service, quick shipping, and careful packaging. Love these guys!

This looks like it should be in a Harry Potter movie, this series unbelievably attractive and I can't stop admiring them. Apmex staff was great!

This is one of the most beautiful coins that I've ever laid eyes on. The coin was in perfect condition and I was amazed how cheap it was.

This is one of the most beautiful coins I have ever purchased. The luster and detail are flawless. Love the design. I most likely will purchase more of the Queens beast collection.

Beautiful coin. I love it. Great experience from Apmex as always. Premium is quite high when i bought it, but I must have it in honor of #brexit. Love how I now own my first 1 oz gold coin backed by a sovereign country, Britannia!

Great design, looking forward to other coins in this series.

I absolutely love this QB 1 oz Gold coin! The design is amazing, and the finish is proof like! No blemishes or scratches!!! APMEX delivers the best quality of coins!!!