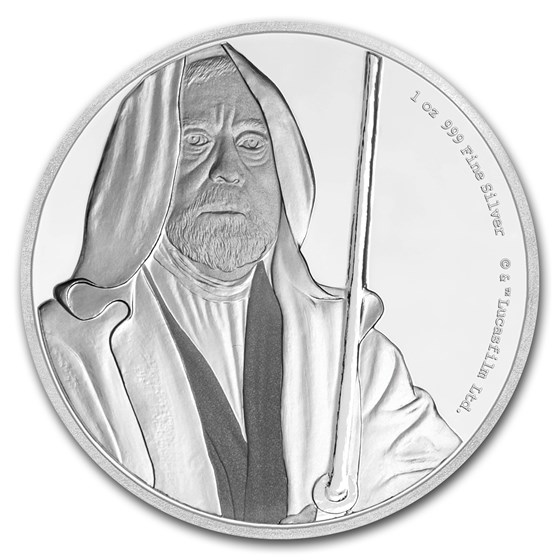 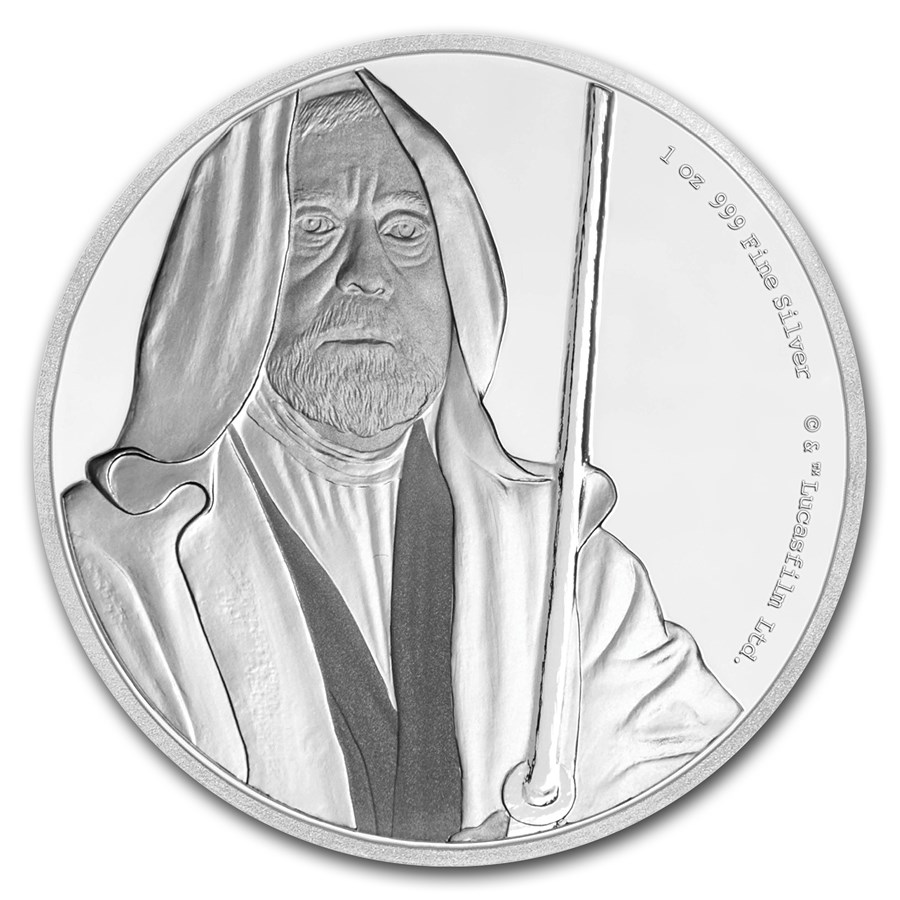 After Order 66, Obi-Wan Kenobi, along with Jedi Master Yoda, fled from the Empire to live in exile. Officially licensed STAR WARS coins with a limited worldwide mintage of 10,000 coins are highly sought after collectibles.


Coin Highlights:
Be sure to grab this highly collectible coin immortalized in .999 fine Silver. Add this 1 oz Star Wars Obi-Wan Kenobi coin to your cart today! And may the Force be with you!

Star Wars Limited Edition Coins:
Star Wars mint coins are a great gift for a young numismatist or Star Wars fan of any age. This series includes classic Star Wars characters such as Darth Vader, Han Solo, Princess Lei, R2-D2, Obi-Wan Kenobi and Yoda available in Gold and Silver coins. These characters are already fan favorites and will increase in Star Wars coins value due to their limited mintages.

Obi-Wan Kenobi
Obi-Wan Kenobi is introduced in the original Star Wars living as the hermit "Ben Kenobi" on the planet Tatooine. When Luke Skywalker and the droid C-3PO wander off in search of the lost droid R2-D2, Ben rescues them from a band of native Tusken Raiders. At his home, R2-D2 plays Ben a recording of Princess Leia Organa which explains that R2-D2 contains the battle plans for the Death Star, the evil Galactic Empire's superweapon. Leia asks him to deliver the droid and the plans safely to the planet Alderaan in order to help the Rebel Alliance. Ben reveals to Luke that his real name is Obi-Wan and that he is a Jedi Master. He gives Luke his father's lightsaber and asks Luke to accompany him to Alderaan and take up Jedi training. Luke declines, but promises to take Obi-Wan as far as Anchorhead Station. After Luke finds his uncle and aunt killed by Imperial troops, he agrees to go with Obi-Wan.

In the spaceport city Mos Eisley, Obi-Wan uses the Force to trick Imperial troops into letting them through a military checkpoint. They enter a local cantina and make a deal with two smugglers, Han Solo and Chewbacca, to fly them to Alderaan in their ship, the Millennium Falcon. During the journey, Obi-Wan begins instructing Luke in lightsaber training. He suddenly becomes weak and tells Luke of "a great disturbance in the Force". Emerging from hyperspace, the party finds that Alderaan has been destroyed, and the Falcon is attacked by an Imperial TIE Fighter. Obi-Wan advises Han to fly away, but Han ignores him and is caught in the Death Star's tractor beam. On board the Death Star, Obi-Wan shuts down the tractor beam, but Darth Vader confronts him and they engage in a lightsaber duel. Obi-Wan uses the duel to distract Vader as Luke, Leia, Han and Chewbacca escape to the Falcon. Although Vader strikes Obi-Wan down, his body mysteriously vanishes the moment he dies. At the climax of the film during the Rebel attack on the Death Star, Obi-Wan speaks to Luke through the Force to help him destroy the Imperial station.

In The Empire Strikes Back, Obi-Wan Kenobi appears several times as a spirit through the Force. On the planet Hoth, he appears to instruct Luke to go to the planet Dagobah to find the exiled Jedi Master Yoda. Despite Yoda's skepticism, Obi-Wan convinces his old master to continue Luke's training. He appears later to beseech Luke not to leave Dagobah to try to rescue his friends on Cloud City, although Luke ignores this advice.

In Return of the Jedi, Obi-Wan Kenobi appears to Luke again after Yoda's death on Dagobah. Obi-Wan acknowledges that Darth Vader is indeed Luke's father, revealed by Vader in the previous film, and confirmed by Yoda on his deathbed, and also reveals that Leia is Luke's twin sister. After the second Death Star is destroyed and the Empire defeated, Obi-Wan appears at the celebration in the Ewok village, alongside the spirits of Yoda and the redeemed Anakin Skywalker.