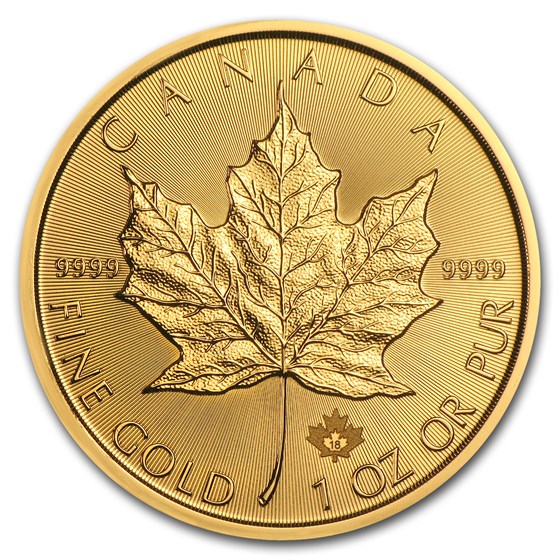 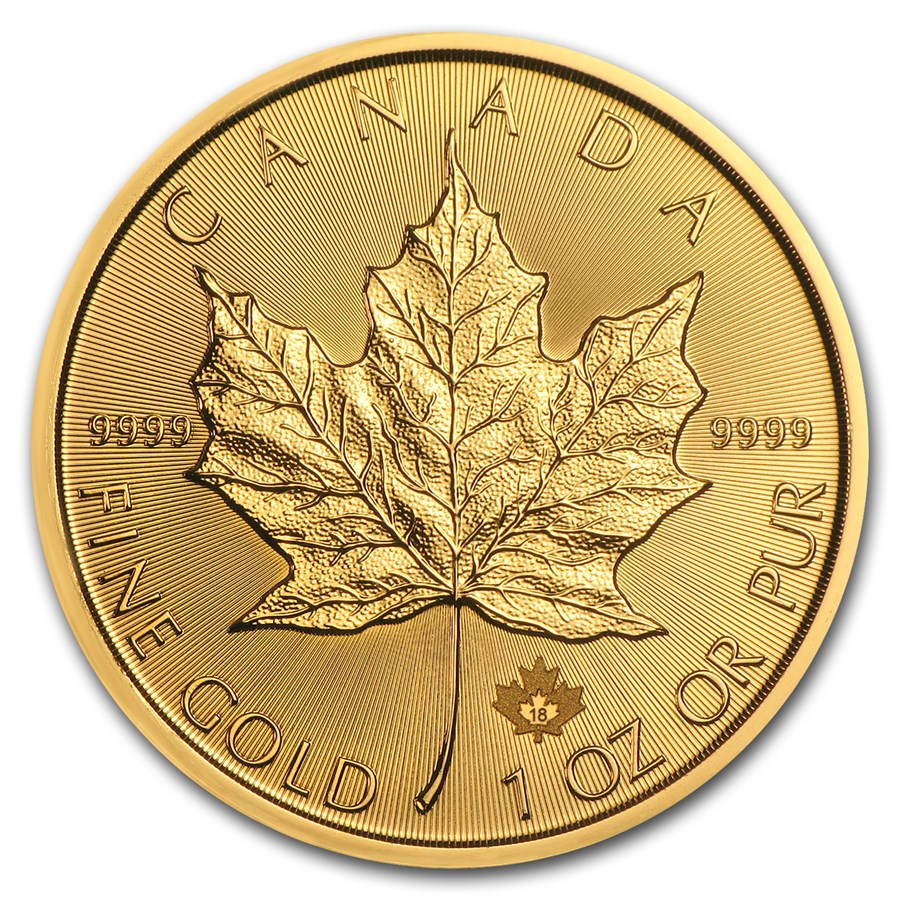 Product Details
Product Details
Containing 1 oz of .9999 fine Gold, the 2018 Gold Canadian Maple Leaf is considered one of the most beautiful Gold coins in the world, appealing to both investors and collectors alike for its beauty and high purity.

The Maple Leaf has been a national symbol of Canada since the 18th century. The 2018 Gold Maple Leafs feature a unique light diffracting pattern of radial lines, making the coins harder to duplicate and providing another measure of security.

The iconic beauty and high purity of these beloved Gold coins now has added security with a radial line background, not seen on bullion products outside of the Canadian Maple Leaf series. Add 2018 1 oz Gold Maple Leaf coins to your cart today!

The 2018 1 oz Gold Maple Leaf features a new form of security through the Royal Canadian Mint’s Bullion DNA program. The Bullion DNA program offers the highest security on the market for any bullion coin. Each bullion coin features a textured maple leaf security privy mark, micro-engraved with laser technology and is visible only under magnification. Etched within the maple leaf security mark are the two digits indicating the coin’s production year. Each micro-engraving is encoded, scanned and recorded at the mint for future authentication giving each coin their unique Bullion DNA.

Sovereign coins, like the 2018 1 oz Gold Maple Leaf, as well as other famous coins such as Mexican Libertads, South African Krugerrands and Austrian Philharmonics, are minted and guaranteed by their issuing government. The Canadian Maple Leaf coin, like every sovereign bullion coin, bears a nominal face value that is largely symbolic. The intrinsic value of the Gold in these coins vastly outstrips their face value. For example, the Gold Maple Leaf coin has a face value of $100, should someone attempt to use it as circulating currency, but Canada has not actually used Gold coins in general circulation since 1913. At that time, the government pulled Gold coins out of circulation in an attempt to prevent Gold from leaving Canada during World War I. Vintage sovereign Gold coins also have greater Gold value than face value, but they may be most coveted by numismatists, depending on their scarcity and condition.

The artwork on the 1 oz Gold Maple Leaf bears witness to Canada’s close ties to the English monarchy. Since 1979, these Canadian coins have depicted Her Majesty Queen Elizabeth II at three different stages of her life, once at age 39, again at 64 and then at 79 years old. Currently, the Gold coins bear an effigy of Her Majesty at age 79, created by renowned Canadian artist Susanna Blunt. This depiction of the beloved Queen is generally considered more relaxed and natural, as it portrays her without a crown.
The new 2018 Gold Maple Leaf is perfect for your new or existing Precious Metal collection or investment holdings.
See More +

The History of the Gold Maple Leaf Coin

The 2018 Canada 1 oz Gold Maple Leaf is the latest item in a proud lineage of Canadian coinage. The Royal Canadian Mint struck its first coin in 1908, when Canada was under the leadership of Governor General Earl Grey. Before that time, all Canadian circulating coins were minted in England and had to be shipped in. Finally, in 1931, Canada’s Ottawa Mint gained complete independence from the British Royal Mint and was restyled as the Royal Canadian Mint. The RCM, birthplace of the Gold Maple Leaf coins we so treasure today, was designated a National Historic Site in 1979. The mint's architecture represents the distinctive identity of Canada’s capital that the Canadian government wishes to project to the rest of the world. The building further symbolizes Canada gaining authority over its own currency. The Canadian Maple Leaf was first unveiled in 1979 and has been in production ever since.

Gold Canadian Maple Leaf coins are one of the most popular bullion coins in the world. They are beautiful, featuring the iconic single maple leaf so often associated with Canada, and of course are of high quality. The value of any single Canadian Gold Maple Leaf coin depends on several factors, such as its weight, mintage and condition. 1 oz Gold Maple Leafs are deservedly among the best-selling Gold bullion coins in the world. The .9999 Gold fineness of these Canadian coins makes them extremely desirable to investors. It is important to consider these 2018 Canada 1 oz Gold Maple Leaf coins may be available at a lower premium over spot than smaller, fractional coins, which tend to command a higher markup per ounce. Additionally, Canadian Maple Leafs are generally priced lower than their U.S. counterparts, the American Gold Eagle. These things all factor into the high demand for Gold Canadian Maple Leaf coins.

This coin minted by Canada might be the most recognizable gold coin in the market. I live in Japan and discovered that I can SELL this coin at a premium over spot (not that I have any intention of selling any time soon, that's for sure). Also, until I discovered APMEX, I was not aware of anybody who would accept payment in my desired form and deliver internationally. Excellent product and excellent seller.

Fast shipping is important to me and they ship it fast. Coin was BU as described. Never a problem good company.

Beautiful flawless coins were received. Not a scratch or mark. In the past I have ordered American Eagles. In the future I will also order Buffaloes and Maples. Excellent fast shipping and courteous phone service.