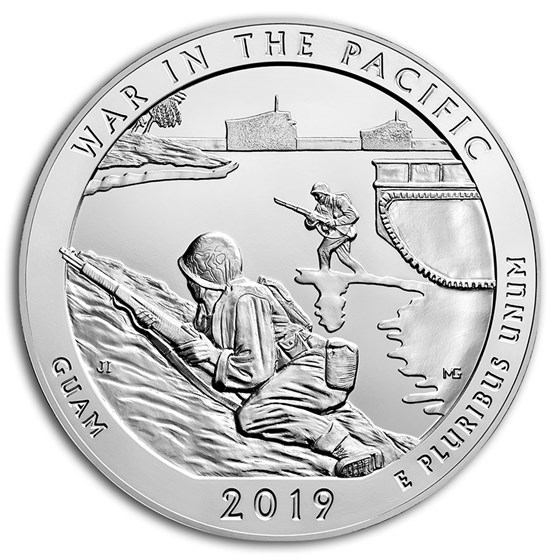 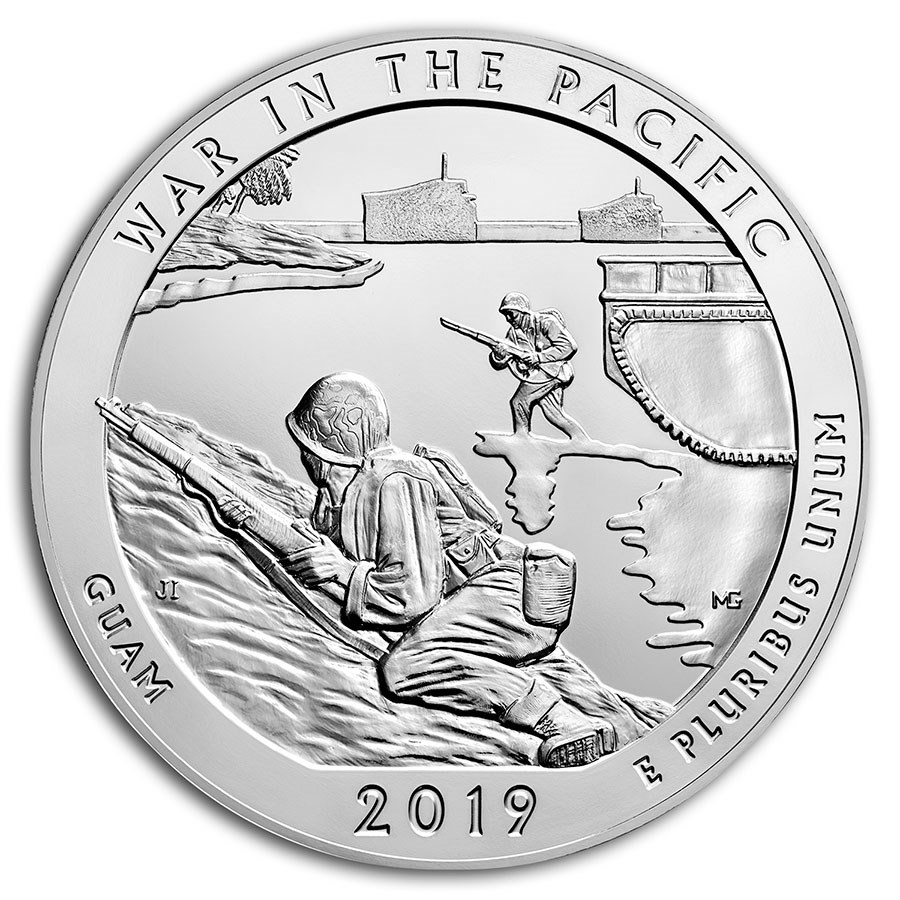 This coin commemorates War in the Pacific National Historical Park in Guam. This is the 48th release of 56 coins. These coins are sought after by investors for their .999 fine Silver content, and demanded by collectors for their artistic value.

Located on the island of Guam, War in the Pacific National Historical Park was established in 1978 to commemorate the courage and sacrifice of those who participated in the Pacific Theater of World War II. The island of Guam, located in the South Pacific and the largest of the Mariana Islands, was the site of a significant battle in 1944 when U.S. forces liberated the island from a brutal two and a half year occupation by Japanese imperial forces. On July 21st, 1944, American forces landed on Guam at Apra Harbor and regained control of the island over the ensuing three weeks. War in the Pacific National Historical Park encompasses many of the sites involved in this battle, including the beaches of Asan Bay, which are pictured on this coin. The park is dedicated to preserving these historic sites and sharing this part of American history with future generations.

The immaculate 2019 War in the Pacific National Historical Park 5 oz America the Beautiful coins are the perfect investment choice for lovers of U.S. history. These bullion coins are comprised of .999 fine Silver with a face value of a quarter dollar. The value of the Silver is, of course, worth much more than 25 cents. The coins contain five troy ounces of Silver, making them among the largest bullion coins ever issued by the United States Mint.

The design of these coins matches the War in the Pacific National Historical Park artwork on the 2019 America the Beautiful quarters of the same name. Esteemed for its rich tropical surroundings and large collection of war artifacts, this U.S. National Park is located on the island territory of Guam. The site honors the bravery, sacrifice and courage of those who battled in World War II, which made it an ideal choice to be memorialized on these 2019 coins.

The National Park System was established through congressional legislation, prompted by President Theodore Roosevelt, who proclaimed 18 national parks by the end of his term. This practice was continued by later presidents using the Antiquities Act until there were more than 100 national parks and parks. Forty-nine of them still operate today, many of which have been honored with 5 oz Silver bullion coins. The America the Beautiful series from the U.S. Mint has plans to continue 56 releases through 2021.

One of five historical sites chosen for the 2019 America the Beautiful series, the War in the Pacific National Historical Park 5 oz coins have a limited mintage, making them highly collectible. Coin enthusiasts and history buffs alike can invest in these coins and use the opportunity to remember events such as The Invasion of Tinian and the Battle of the Philippine Sea.

The War in the Pacific National Historical Park represented on these 5 oz Silver coins is made up of seven units scattered across Guam that played a role in World War II.

Like all American-made bullion, these 2019 Silver coins are made to exact specifications, with a guaranteed 5 oz weight and uniform size. These magnificent America the Beautiful coins are struck to the same high standard each year, so regardless of date of issue, you always know the level of quality to expect. The popularity garnered by U.S. Silver coins goes back for decades, and this edition is no exception. Each year, this series builds an even greater tradition of quality.

Was one of my first collectible purchase ventures into Silver. Not likely to be looking to resell this, but I am a history buff. I like the Silver Quarter designs, but I am not willing to pay much of a premium over their initial US Mint cost or look to collect them all, so I am just picking the ones that appeal to me for history or locations I would like to visit in our country once we are no longer in a lock down siyptuation

Would like to buy every one in the series

The attraction for me for this particular product is what it represents. The war. And it's beautifully made and 5 oz of pure 999% silver. The "State" quarters and "America the Beautiful" quarters are so beautiful. I want to collect them all.

I love it! A great design that will appeal to many, many people. In a nice capsule for protection.