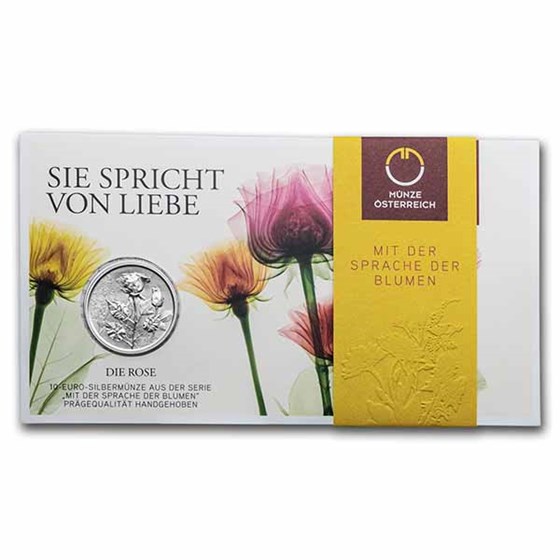 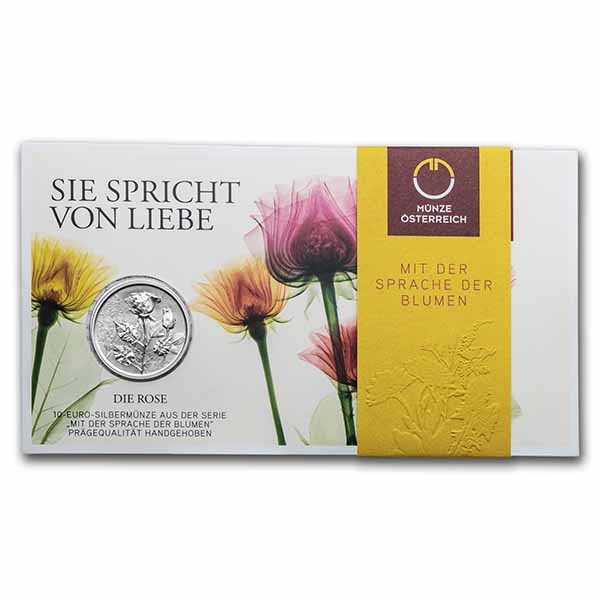 This coin is a fantastic addition to anyone who's love language is flowers. Add this 2021 Austria Silver €10 Language of Flowers Rose coin to your cart today!

Language of Flowers Series
Whether to convey feelings of love, desire and friendship, congratulations and condolence, declarations of intent and even forbidden and unspeakable things, flowers have been used as a form of language throughout recorded history, each country and culture with its own version. The Language of Flowers series brings this age-old custom back to life and discuss the meanings, folklore, properties and uses of seven well-known flowers. The messages conveyed by those flowers are inspirational, so too is the technology used to bring nature to life on the coins. Opening with the rose, the series continues with the dandelion, marigold, forget-me-not, chamomile, peony and violet.

In all major religions it is linked to the miracle of love, which has led to its main symbolic meaning in the language of flowers. With its exceptionally beautiful petals, intoxicating scent and the delicacy of its unfurling blooms, which suggests lips parting for a kiss, not to mention availability, sensuality and fertility, the rose has indeed been an important symbol of love in its many forms for centuries.

In addition to its more carnal connotations, the rose is symbolic of mystery, secrecy and tacit understandings, a meaning believed to have its origins in Greek mythology. Legend has it that Aphrodite gave a rose to her son, Eros, the deity of love, who in turn gave it to Harpocrates, the deity of silence, to induce him to keep quiet about the indiscretions of the gods, and thus the rose became the emblem of silence and secrecy. So, in the language of flowers a rose can also be used to signal an illicit tryst or the beginning of an affair. More innocently, the rose remains the perfect flower, particularly during difficult times, to send messages of tenderness and affection to loved ones near and far.