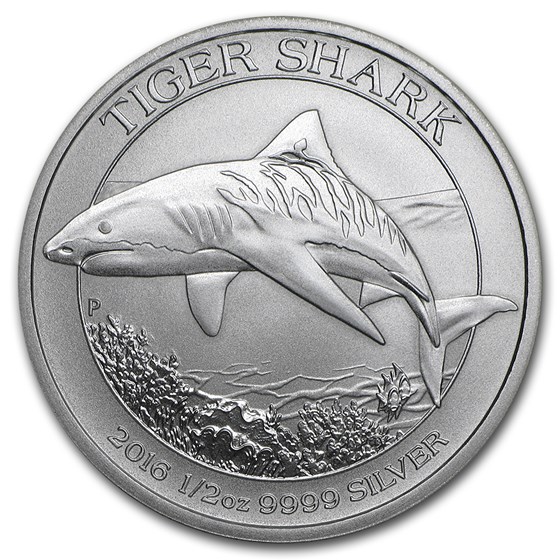 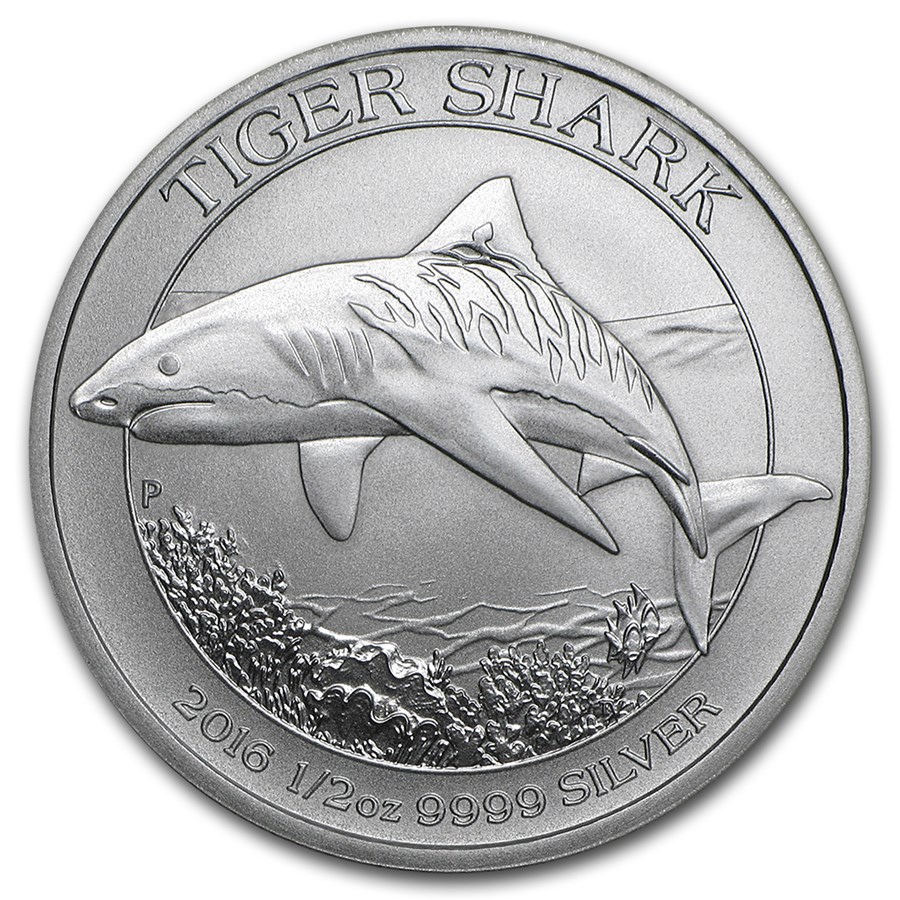 Protect your Silver Shark coin in style by adding an attractive display box to your order.

The Perth Mint has once again produced a coin enjoyed by all. Add the 2016 1/2 oz Silver Tiger Shark coin to your cart today!

Visit our Tiger Shark page to learn more about this fascinating coin.

The tiger shark, commonly known as the “Sea Tiger”, is the fourth-largest shark in the world. Tiger sharks get their name from eye-catching dark vertical stripes found on young sharks, also known as pups. As these pups mature into adults, the dark stripes begin to fade. The skin of a tiger shark typically ranges from blue to light green with a white or light-yellow underbelly, giving it great camouflage when seen from above or below.

This solitary shark ranges in size from 10 to 14 feet and weighs from 849 to 1,400 pounds as an adult, but large specimens have been known to grow up to 25 feet in length and weighing up to 1,900 pounds. Tiger sharks enjoy warm waters and can easily be spotted near the surface in tropical and sub-tropical areas of the world such as Hawaii. Though this predator of the deep is at the top of the food chain, it is considered a near-threatened species due to finning and fishing by humans.

My first 1/2 oz silver coin- it's really not a small coin, as I was expecting. The available capsule (separate purchase) has a clear gap around the edge, so that it coordinates with other larger format coins, and really brings out the beauty of the coin. I discovered later that this is part of a 3 part series with Great White Shark & Hammerhead Shark, which I have now collected separately. I wish there were more 1/2 silver coins!

I purchased multiple 1/2 oz shark coins (Great White, Tiger, Hammerhead) and I was very pleased when they arrived. I set each coin in a 32 mm holder and just love they way they look. These were the first 1/2 oz rounds in my collection and there will be more added in the future.

IF you wish to see a review on this Round, check out my Review on the Great White. I figure No sense writing up the same thing over and over again on the same Round with just a different Design/Year on them. But in a nutshell....love these Coins !

They look great and have a nice price.

love the design wished it would have been an ounce

I love to dive with sharks love those coin

Really like the Shark series rounds. Purchased all three that were available at this time. Premium a little high, especially on the older year coin, but that only shows an increase in value which is s good indicator on ROI. Nice detail, Nice size for 1/2 oz. Very satisfied, looking forward to future releases if they come.

I bought all three shark coins for my son, he loves them! Nearly flawless and they look really great lined up in the album. Wish there were more in this series