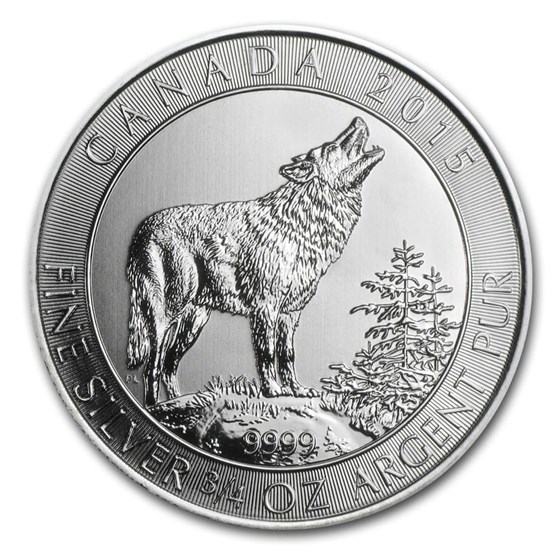 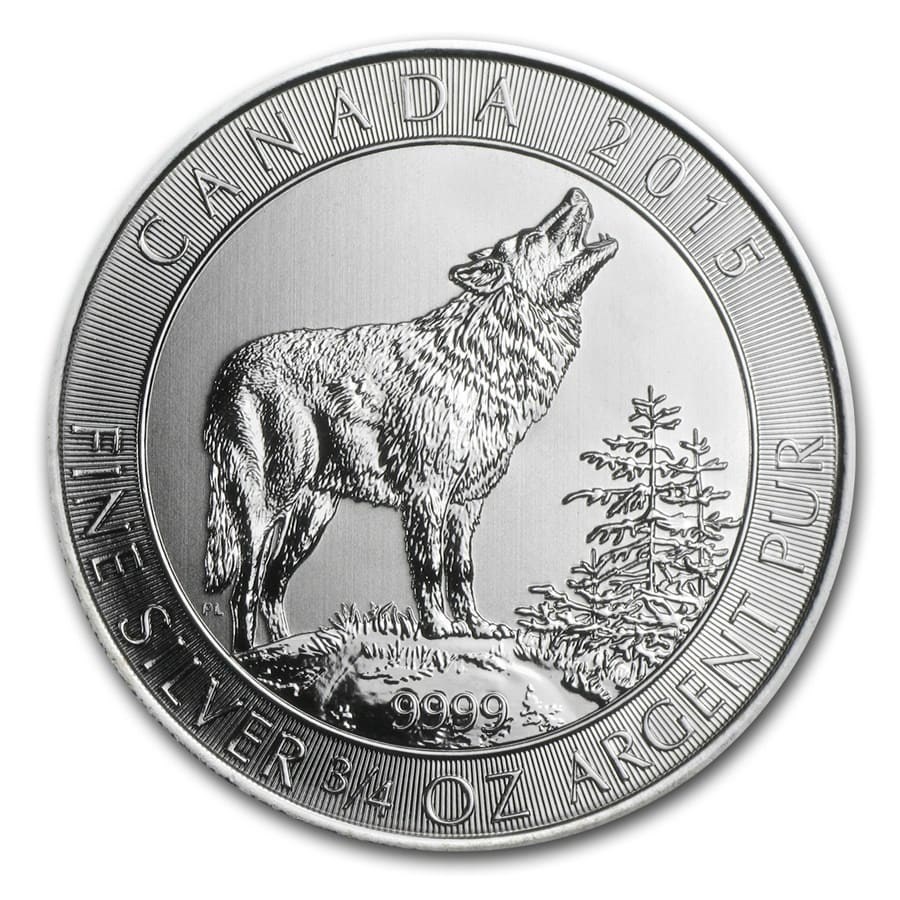 Product Details
Product Details
This beautifully crafted APMEXclusive® Grey Wolf coin stands out from many other Silver bullion coins due to its unique 3/4 oz size.

It is among the world's purest coins, containing the Royal Canadian Mint's high standard of .9999 fine Silver.

Visit our Grey Wolf page to learn more about this fascinating coin.

Coin Highlights:
The 2015 3/4 oz Silver Grey Wolf coin is minted on an incremental basis, so a specific mintage cannot yet be determined. By comparison, the mint’s Wildlife Series and Birds of Prey Series each have a mintage of 1 million coins.

About 30% of the world's population of Grey Wolves is currently found in Canada, though the population extends into the United States. Once hunted to near extinction, Grey Wolves have made a remarkable comeback and now this legend lives in Silver. Join the pack and add this symbol of perseverance to your collection today!

Buy 3/4 oz Silver Canadian Grey Wolf coins, and consider expanding your investment portfolio with other Silver coins from the Royal Canadian Mint. As shown in these 2015 Silver coins, the Royal Canadian Mint is known for producing high quality Silver coins like their famous Silver Maple Leaf collection that was first minted in 1988. Other Canadian coins that are in high demand for Silver coin investors are the Silver Wildlife Series coins that feature images like the bison, grizzly and antelope. Many Silver bullion investors also look to the Silver Birds of Prey series or the Silver Predators series for Silver coins with strong investment potential and beautiful animal imagery.

Many investors of Canadian Grey Wolf coins will also buy other Silver coins featuring wolves to give their portfolios an eye-catching theme. These beautiful 2015 Silver coins from the Royal Canadian Mint are part of a Grey Wolf Series which also features the 2016 3/4 oz Silver Howling Wolves coins. Other Canadian coins featuring wolves include their 2011 1 oz Silver Wildlife Series Wolf, from the popular Wildlife Series. In addition to Canadian Silver bullion featuring wolves, APMEX also has available the Cook Islands 2 oz Silver Gray Wolf coins from the North American Predators series, all coins that will make any investor proud of their portfolio.

The beautiful Pierre Leduc artwork on this Canadian coin depicts a majestic Grey Wolf in a familiar pose, howling at an unseen moon.
See More +

The history of the Canadian Grey Wolf coins

These 3/4 oz Silver Canadian Grey Wolf coins pay tribute to a species with a difficult history throughout the world. Pictured on these beautiful 2015 Silver coins, the grey wolf has been feared and hunted throughout Europe, Asia and North America leading to the extirpation of the species in most of its original homelands. Specifically, these Canadian coins honor the grey wolf’s connection to Canadian forests, a relationship that was severely threatened in the early 20th century because of overhunting. This Silver bullion captures the beauty of the wolf that has seen a resurgence in numbers in Canada’s western forests since the 1970s.

Buying 3/4 oz Silver Canadian Grey Wolf coins is considered by many to be a smart investment. These 2015 Silver coins feature lower premiums over the spot price of Silver which allows buyers to accumulate Silver at a faster pace. These Canadian coins are also backed by the Canadian government who guarantee their content, weight and purity. Browse through the other Silver bullion available from the Royal Canadian Mint to bolster your investment portfolio.

I try to collect almost anything wolf. Love these.

One of my favorites

The wolf series is one of my favorite coins in my collection. Absolutely one of the most beautiful coins available on the market today.

Was skeptical due to under 1 oz, but I love these coins. Among the most beautiful coins I own. Already bought more of these and the 2016 Wolf coin.

This is one of my favorite coins from the Canadian Mint. It is only 3/4 oz but the detail is fantastic. I buy a lot of Canadian Maple Leaf coins because they are always in BU condition with great artistry and detail. Thanks APMEX

I purchased this coin simply for the Grey Wolf and being a fan of Canadian coins. The coin arrived in a flip. The coin is in perfect condition with no marks. I am glad I was able to add this coin to my collection, with my others. APMEX delivered fast and secure. Buy with confidence.

First time purchase of silver coin below 1 oz. I was hesitant about purchasing because of the 3/4 oz, but so glad I did. Very beautiful coin with great detail. Would buy again.