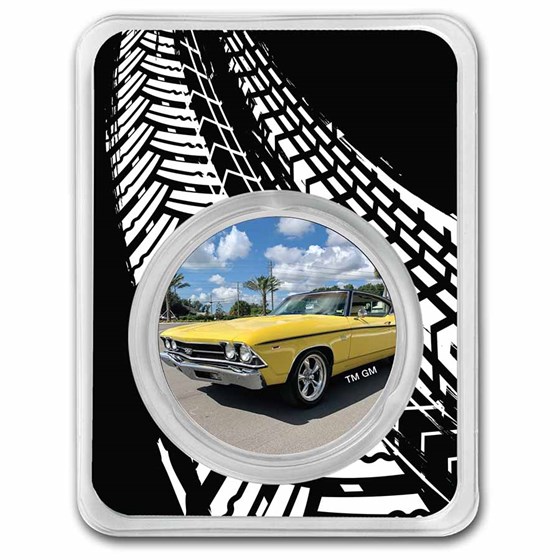 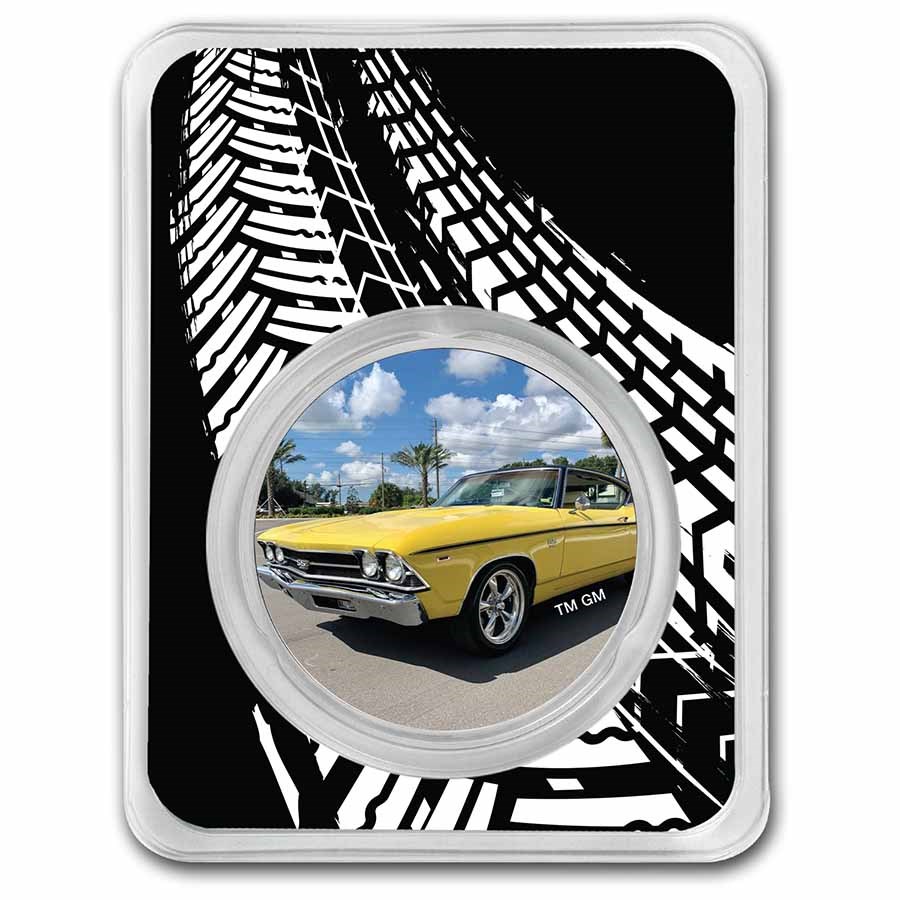 
Keep your new Silver round and your other Precious Metals secure in one of our safes. Shop APMEX’s selection today!

The Chevrolet Chevelle is available in .999 fine 1 oz colorized Silver, so make sure you do not miss out! Add this Silver round to your cart today.

Chevrolet’s 1969 Chevelle SS 396
The 1969 Chevelle SS 396 on this round was painted “Daytona Yellow” and featured stripes on the side in black. The Chevelle SS 396 had a strong following going into 1969, which was further enhanced by its now-iconic redesign that debuted a year earlier. It kept the big-block muscle and added swooping lines, an aggressive front-end treatment, and just enough inexpensive go-fast gear to make the deal sweeter for gearheads. Shifting the SS 396 to option package status added its baseline 325-horse 396, heavy-duty suspension, power front disc brakes, 14 x 7-inch SS wheels with F70-14 tires, and other features to any two-door model.

Because the SS 396 option was available on any two-door Chevelle, it was quite probable to find one; however, in most cases, you'll see them with a hardtop or a convertible top. The new redesign was highly like the previous one, with only minor modifications. The front grille was updated, as was the front bumper, tail panel, and tail amp designs, both of which were finished in matte black with an "SS" emblem. The front fenders were also adorned with emblems.

The model name Chevrolet used confirmed that the big-block engine was the sole power plant available. The legendary Mark IV V-8 powered the Chevelle SS 396, which came with a 325-hp variant. Identified by RPO code L35, it had cast-iron oval-port cylinder heads, a hydraulic camshaft, and a Rochester four-barrel carburetor on a cast-iron intake manifold. It was advertised at a 10.25:1 compression ratio and could deliver 410 lb-ft of torque.

The History of Chevrolet
Chevrolet began as an experimental car shop in Detroit, which gradually expanded throughout the decades until World War II. Many the manufacturing facilities and assembly plants were converted to military or postwar production in order to meet demand, with many more on the way.

Louis Chevrolet, a well-known automobile driver, was hired by William C. Durant, the founder of Buick Motors Corporation, to create a vehicle that individuals could buy in 1909. In 1911, the Chevrolet Motor Company of Michigan was founded and began producing vehicles the following year. In 1912, "Chevrolet Motor Company" was changed to "Chevrolet." It went through several expansions as the vehicle's popularity increased, culminating in it becoming a part of General Motors in 1918.
From 1931 until 1941, Chevrolet was the world's top auto brand. From 1927 until 1931, Chevrolet sold more than a million automobiles every year.

Chevrolet had a significant impact on the American automobile industry throughout the 1950s and 1960s.