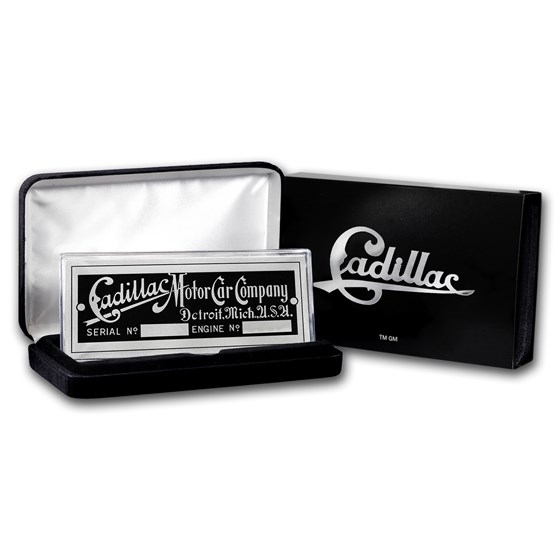 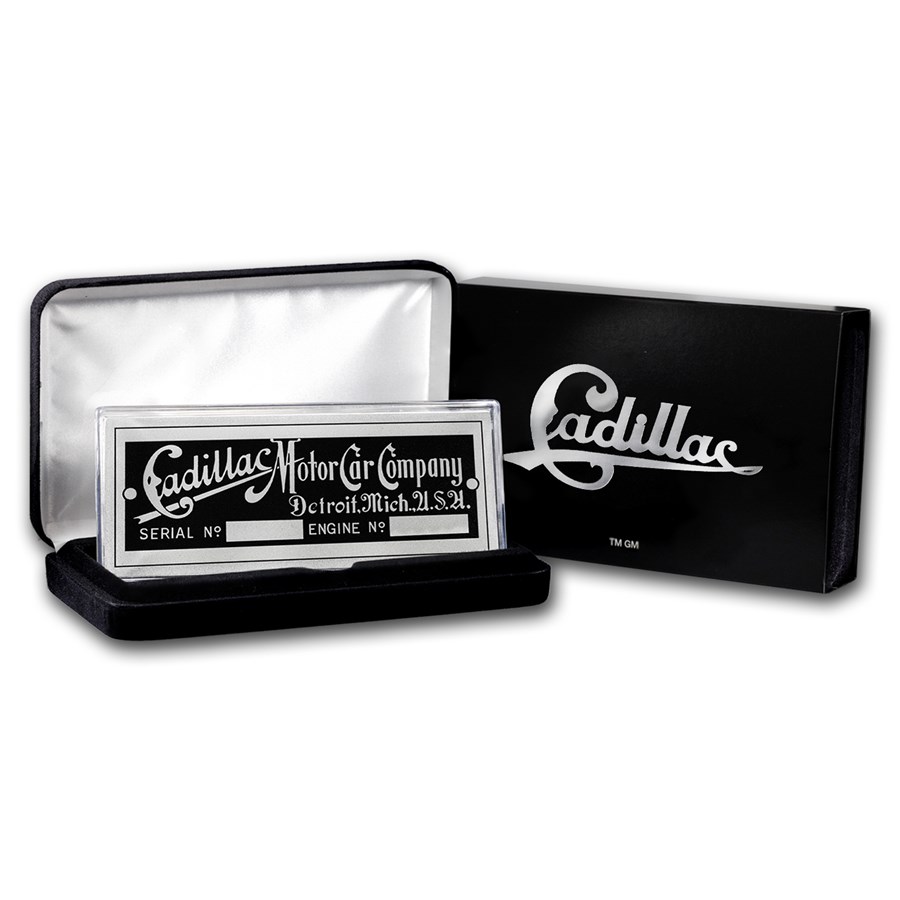 Product Details
Product Details
Only $169.99 per item
The luxury car brand that is admired around the globe is here on colorized Silver! We are excited to introduce this black and white colorized 4 oz Silver bar that features two different iterations of Cadillac’s logos that can be found only at APMEX.

Add a 4 oz colorized Silver Cadillac bar to your collection or portfolio today!

Cadillac’s 1908 and 1924 Logos
Cadillac updated its visual logo in 1908 to better represent simplicity. The logo included a crown, crest and tagline, "Standard of the World," which reflected Cadillac's ambition for simplicity. The six ducks, the checkers and the initials CBT are also depicted on the crest. The nameplate—"Cadillac" soaring above the crown – reigned for approximately six years, laying the groundwork for a spherical emblem.

The 1924, the Cadillac grille emblem took the angled Cadillac wordmark from the 1908 logo but straightened it out and left it to stand on its own. This iteration of the Cadillac logo is simplified and bold. This emblem holds enough nostalgia to feel classic, while the simplified design gives it a modern look.

The company's name is derived from Antoine de la Mothe Cadillac, a French-Canadian fur trader who founded Detroit, Michigan in the late 18th century. Cadillac's coat of arms served as the basis for the Cadillac logo. Cadillac had already established itself as one of the most prominent luxury automobile producers in the United States before General Motors acquired it in 1909. It was the first practical vehicle and became the model for modern automobiles because of its interchangeability with small components. It was at the forefront of technological advancements, including full electrical systems, a frictionless automatic gearbox and a steel roof. Cadillac offered three powertrain options, establishing a new bar for automobile manufacturing in the United States.

In 1908, Cadillac was the first vehicle from the United States to win the Dewar Trophy from the Royal Automobile Club of the United Kingdom, demonstrating its components' interchangeability during a durability test; as a result, Cadillac adopted its current motto "Standard of the World." The Duryea brothers' creation was the first automobile with an electrical system, which it obtained due to its original design and performance. For the first time, their 1912 award for incorporating electric starting and lighting in a mass-produced vehicle was given.

Elvis Presley was a big fan of Cadillac vehicles. He owned over 100 during his lifetime, making Cadillac his favorite automobile brand.

Harley Jarvis Earl was General Motors' first head designer and eventually became its vice president. He was the first to develop a "concept car," and his technological expertise and design know-how allowed him to create some of GM's and Cadillac's most famous automobile features, such as the tailfin. GM was among the first automobile corporations to hire female designers in the mid-1950s. Susan Vanderbilt, Jeanette Linder, Ruth Glennie, Sandra Longyear, Marjorie Ford Pohlman and Peggy Sauer were "Damsels in Design" who worked on individual GM brand car interiors, while Gere Kavanaugh, Jan Krebs, Dagmar Arnold and Jayne Van Alstyne worked on car displays and other related projects.

The 2022 year celebrates Cadillac’s 120th anniversary, a significant milestone for the company.