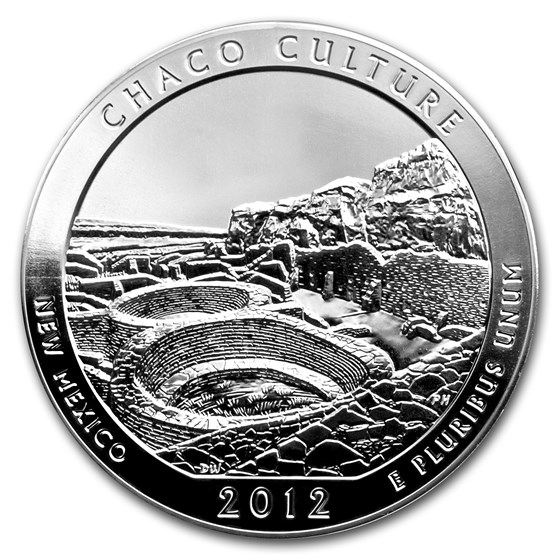 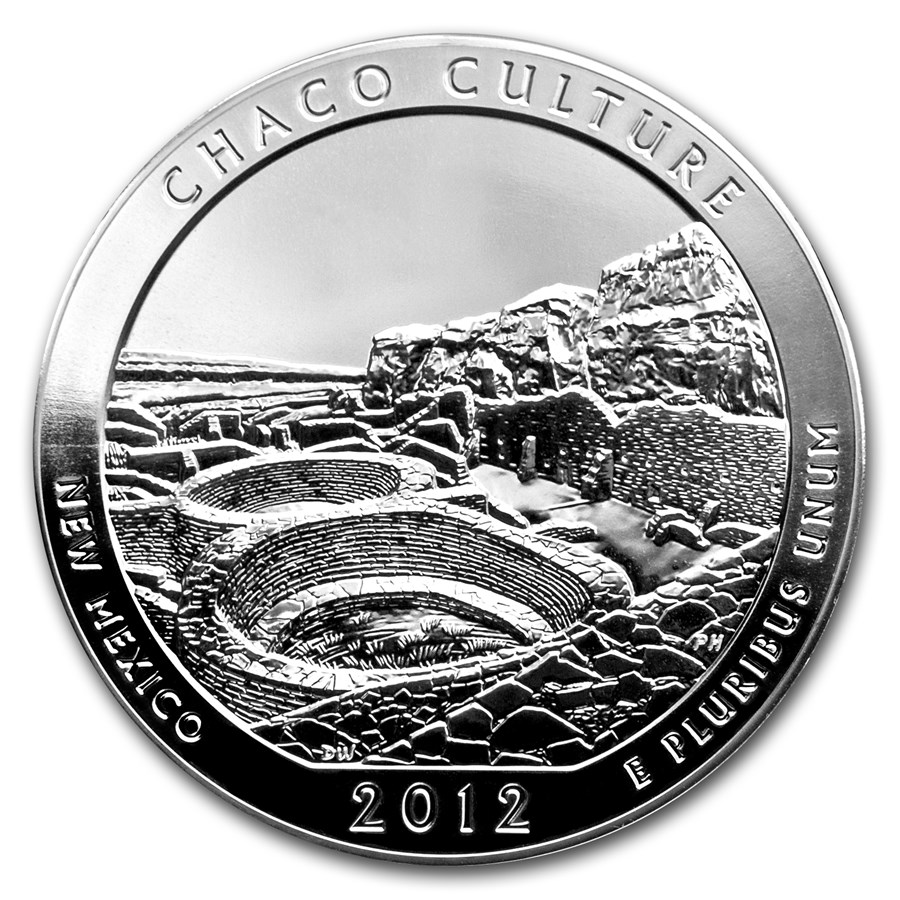 Coin Highlights:
Protect your Silver ATB coin in style by adding a beautiful display box to your order.

The America the Beautiful Silver Coin Series is loved for its unique designs and low mintages. Add this 2012 5 oz Silver Chaco Culture National Park coin to your cart today!

Chaco Canyon in northwestern New Mexico was the cultural epicenter of the ancient Pueblo Peoples between 850 and 1150 A.D. and is today known for its "Great Houses,” distinctive architecture which feature many petroglyphs and pictographs, and kivas, or ceremonial structures. The Chacoan sites are a part of a larger network of Native Americans which included the Pueblo, Hopi and Navajo tribes. The canyon was the center of a system of communities linked across 40,000 square miles in the American southwest.
Chaco Canyon was first established as a national site on March 11, 1907. The reverse of this Silver coin illustrates two of the elevated kivas that are part of the Chetro Ketl Great House as well as the north walls of both the Chetro Ketl and the canyon.

Beautiful 5 ounce silver from the US Mint. Fair price; thanks APMEX!

Apmex put this coin on sale. I ordered it and glad I did it has very nice details. It came to me in excellent shape. Thanks Apmex.

One of three 2012 ATB coins that I recently purchased, this example was very nice. I appreciate APMEX sending me excellent coins that are problem free. I look forward to future purchases from APMEX.

A truly wonderful coin and great service! Apmex is a no worry decision. Great prices and shipping impeccable. Thank you.

This is a beautiful way to invest in silver and have something that has a very appealing design to look at. It also should appreciate in value much faster than simple silver bars or silver rounds. It is a sound purchase since it is issued by the US Mint.

Really nice scene. Larger size makes it easier to enjoy the art. Beautifully shiny and comes in its own protective capsule.

Amazing coin. My absolute favorite for this year's designs. Intricate brickwork and mountain side texture bring out the 3D effect of this art by tilting the coin slightly sideways and letting the light refract off of the lines makes me smile. Again, as always, APMEX has provided superior service second to none. Thank you.