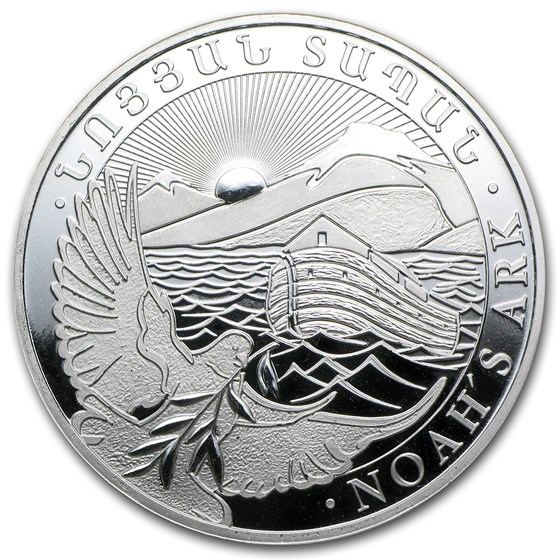 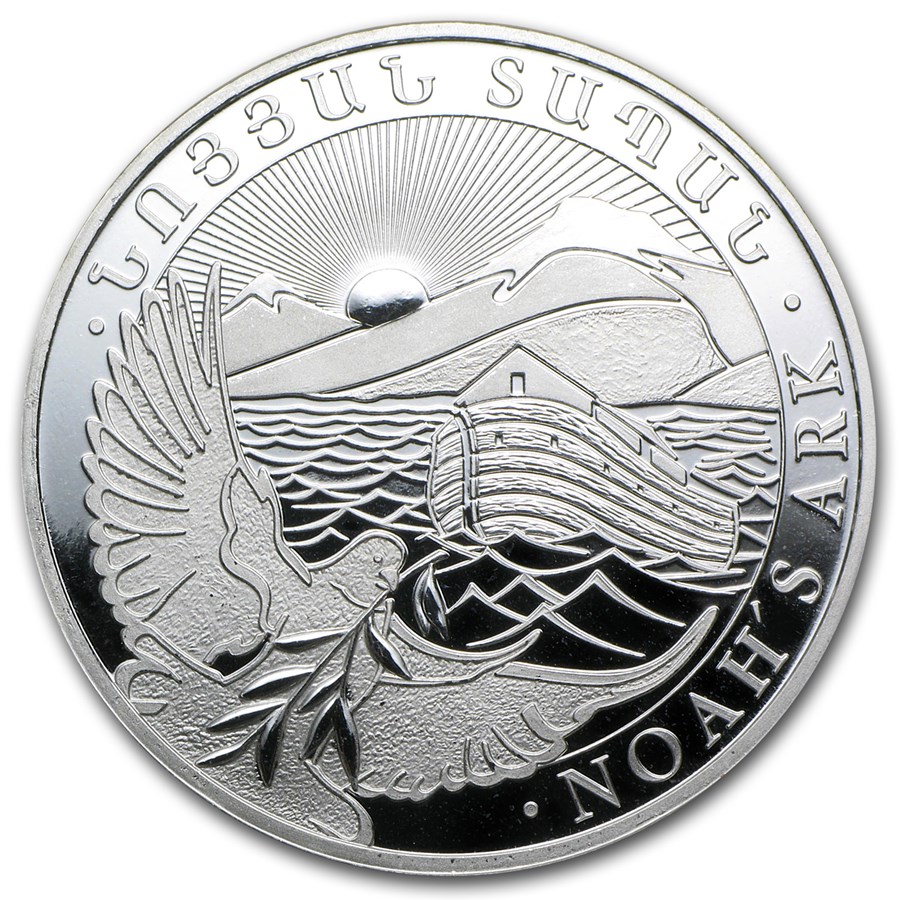 Your purchase is guaranteed to match the quality of the product shown. It will not be this exact item.
Product Details
Product Details
Each Noah's Ark coin is legal tender at its face value and is issued by the Central Bank of Armenia. These coins feature supreme minting quality and purity produced by one of the most modern private mints of Germany.

The third year of issue, these Armenian Noah's Ark Silver Coins embody the beauty of faith and conviction amongst adversity. Transcendent in spiritual and physical beauty, these coins capture this story of tribulation, promise, and of blessing embraced in 1 oz of .999 fine Silver. Each coin tells a story directly connected with Armenia where Noah's Ark is believed to have rested on Mt. Ararat after the flood waters receded.

Silver 1 oz Noah's Ark Coins are great for diversifying your portfolio at a low price, for collecting, and for presenting as a gift. Add this 2013 Armenia 1 oz Silver 500 Drams Noah's Ark coin to your cart today!

The Armenian Silver Noah’s Ark bullion coin is a tribute to Armenia’s connection with the tale of Noah’s Ark. First released in 2011, the Noah’s Ark bullion coin is issued by the Central Bank of Armenia, although it is not produced in the country. Available in a wide variety of sizes including 1/4 oz, 1/2 oz, 1 oz, 5 oz, 10 oz, 1 kilo and 5 kilos, all containing .999 fine Silver, this coin is valued all over the world for its purity, quality and beautiful homage to Noah’s Ark.

some toning but does not detract from appearance.

Diamond in the Rough!

*Bought a roll of 20 APMEX sent me the coins in the original tube. They did not break the protective/tamper seal. Every coin was flawless! For the price over premium, quality of the coin and limited mintage…these are keepers.

Great coins and were prooflike quality.

Picked up a tube from Apmex and very pleased, one of my favorite coins on the market.

Just beautiful. I will be ordering more for my grandchildren!

This has to be the best value coin in my collection. Nice design and great eye appeal.

There is no shortage of interesting silver coins on the market. This coin distunguishes itself from the many other competing high quality coins in two points: 1) a truly attractive design, and, 2) a very interesting way to package 20 coins into a tube. The manufacturer seals the tube with a special tape claiming that removing that tape would release the special gas inside the tube which is supposed to protect the coins from tarnishing. Buying the tube involves a paradox: If you do not open the tube, you will never be able to enjoy the beauty of the coins. On the other hand, if you do open the tube, you may run the risk of tarnishing the silver coins. My solution to this problem was: I ordered 21 coins which means I got a full tube of 20 coins completely sealed and one additional coin for viewing it. As usual, Apmex did an excellent job of packaging and delivering the coins. Thanks!

I bought a few of these to see if the quality was up to par. I am very pleased. Like some others I did not find any spots or blemishes. This is a proof like coin and beautiful with the noah design. I will be buying more of these for certain.

I purchased a few of these to give as gifts to my nieces and nephews for Christmas. They really liked the coins! I was able to give something they'll keep and appreciate forever, while the image reminds them of the gift of God's love and forgiveness to all who will receive it.