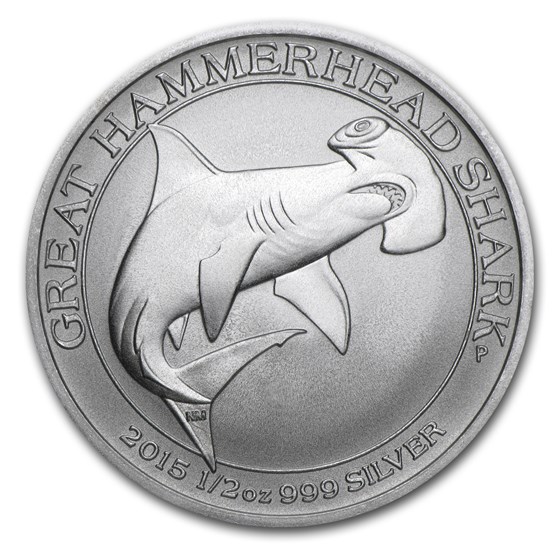 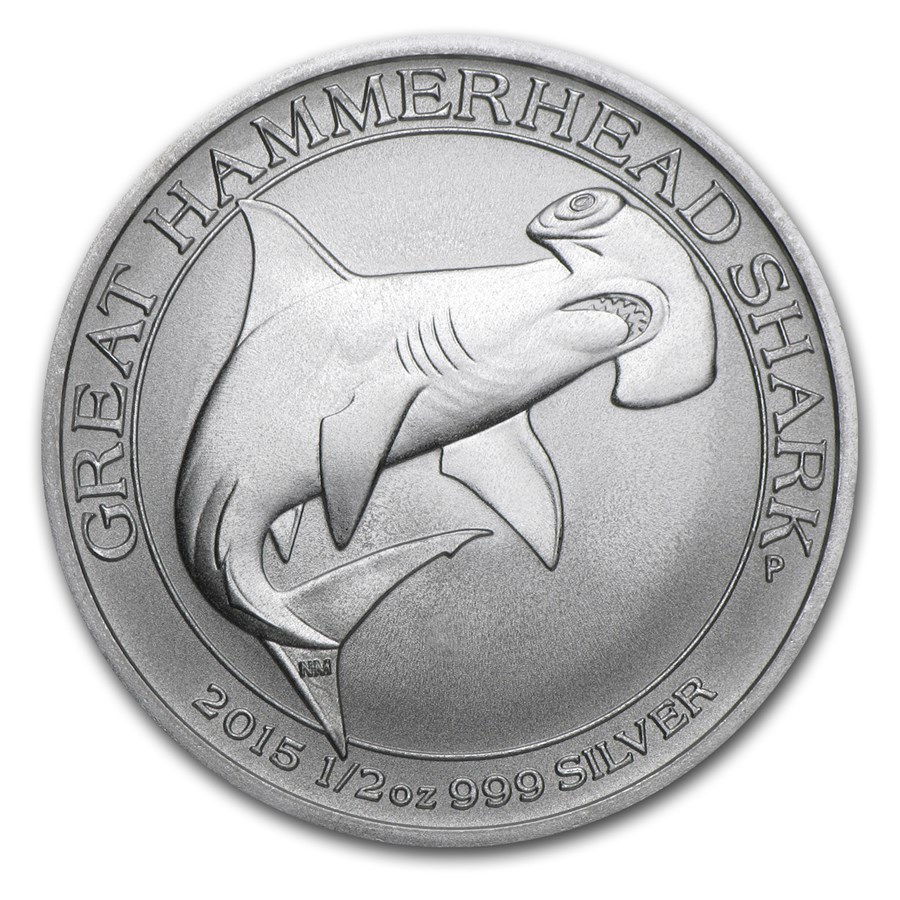 $26.45 $26.95
As Low As
Product Details
Product Details
Featuring one of the most easily recognizable animals on earth, these APMEXclusive® coins from the Perth Mint honor the great hammerhead shark. This coin has a mintage of 150,000 coins, adding collectibility to the .999 fine Silver content.

Visit our Great Hammerhead Shark page to learn more about this fascinating coin.

Coin Highlights:
Protect your Silver Shark coin in style by adding an attractive display box to your order.

The Perth Mint has once again produced a coin enjoyed by all. Add the 2015 1/2 oz Silver Hammerhead Shark to your cart today!

We have received these Silver coins as an APMEXclusive® from the Perth Mint, which means you will be unable to get this beautiful design anywhere else. This exclusivity, combined with a strictly low mintage, adds an aspect of collectibility to these low premium Silver coins.

The magnificent great hammerhead shark is the largest species of hammerhead, growing up to 20 feet in length. On average they are around 11 feet long and weigh 500 pounds. They can be distinguished from other shark species by the shape of their head and the tall, curved first dorsal fin.

The Silver in a Silver coin has hundreds of uses in industry.

The value of a Silver coin is partially derived from the industrial uses of Silver. The 1/2 oz Silver shark has a legal tender value of 50 cents, but the intrinsic value of Silver is much higher because it can be used in ways such as batteries, antibacterial medical devices and chemical reactions for producing compounds. The price for Silver coins for sale at APMEX varies with the industrial demand, and the unique chemical properties of Silver mean Silver has uses in nearly every industry. Australian Silver coins are a way for you to own Silver and profit from the demand for the Precious Metal.

Silver coins for sale are guaranteed for weight and quality by the government that issues them.

A government mint backed Silver coin always has a face value, making it legal tender in its country of origin and different from a Silver round, which may look like a coin but will not have a monetary value on it. A 1/2 oz Silver shark is stamped with the value 50 cents, but its real value is tied to the Silver spot price. APMEX has Silver coins for sale that can be divided into two categories: coins sold as Silver bullion and coins sold for their rarity and value to collectors. Australian Silver coins such as the Hammerhead Shark Series are created primarily to be used as bullion by investors with the guarantee of the Australian government behind them. However, collector series do often have numismatic or collector value, especially older coins in the series with popular designs.

This .999 fine Silver coin is the second release in the APMEXclusive® Perth Mint Shark Series that celebrates popular sharks on 1/2 oz Silver coins.

The history of Australian Silver coins

The Silver coin series at the Perth Mint celebrate the variety of unique wildlife to be found in and around Australia. The Australian Silver coins series started with the Silver Kookaburra in 1990, which was so popular that other coin series followed. If you want a 1/2 oz Silver shark, you can choose from the Great White Shark released in 2014 and the Hammerhead shark released in 2015. Other fascinating Silver coins for sale at APMEX include designs for the Saltwater Crocodile, the Koala and the Funnel Web Spider.

Why invest in the Perth Mint Silver coin series?

Making a Silver coin is a far more complex process than making a coin out of base metal, adding to the Silver coin’s value. The production process for a 1/2 oz Silver shark needs to be carefully calibrated because getting the exact weight correct is important as you cannot simply throw away valuable Silver coins that are miscast. Silver coins for sale are made by only a few mints around the world because of the expertise required. Australian Silver coins are made at the Perth Mint, one of the world’s leading mints, which upgraded its facilities in recent years to improve its manufacturing processes.

Great coin with nice details. Got this and some other fish coins for my son. He loves it!

Love the Sharks, Mahalo for a seamless transaction.

I purchased multiple 1/2 oz shark coins (Great White, Tiger, Hammerhead) and I was very pleased when they arrived. I set each coin in a 32 mm holder and just love they way they look. These were the first 1/2 oz rounds in my collection and there will be more added in the future.

APMEX COMES THROUGH FOR ALL

APMEX comes through for amateur collectors like myself. We purchase US minted as a back up in the event our US paper currency fails and not so much for making a profit buying and selling. We also purchase the US minted as gifts rather than worthless gift cards putting money into our own pockets rather than the retail market.

I got this coin as a deal for purchasing other products. I really like sharks so this fits me. Very attractive for me.

Posted By:A gold bug I am not

This was for a friend that loved sharks

Both of the 2015 Australia 1/2 oz. Silver Great Hammerhead Shark BU coins look like someone ground on them with a small Dremel tool or with very fine sandpaper. It's much worse than Milk Spots. The overall design of the coins is good but the quality control for these was seriously lacking.