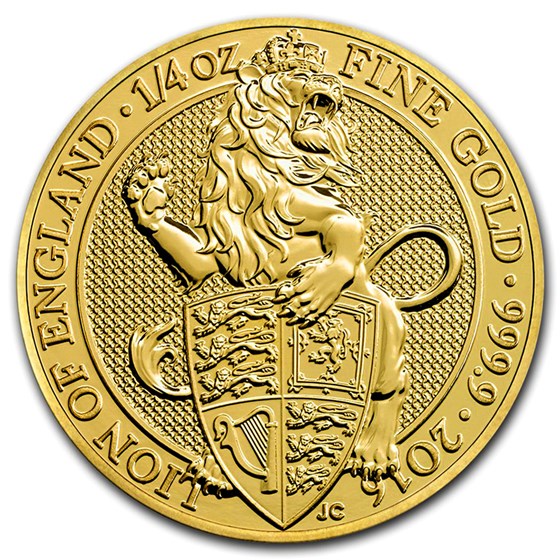 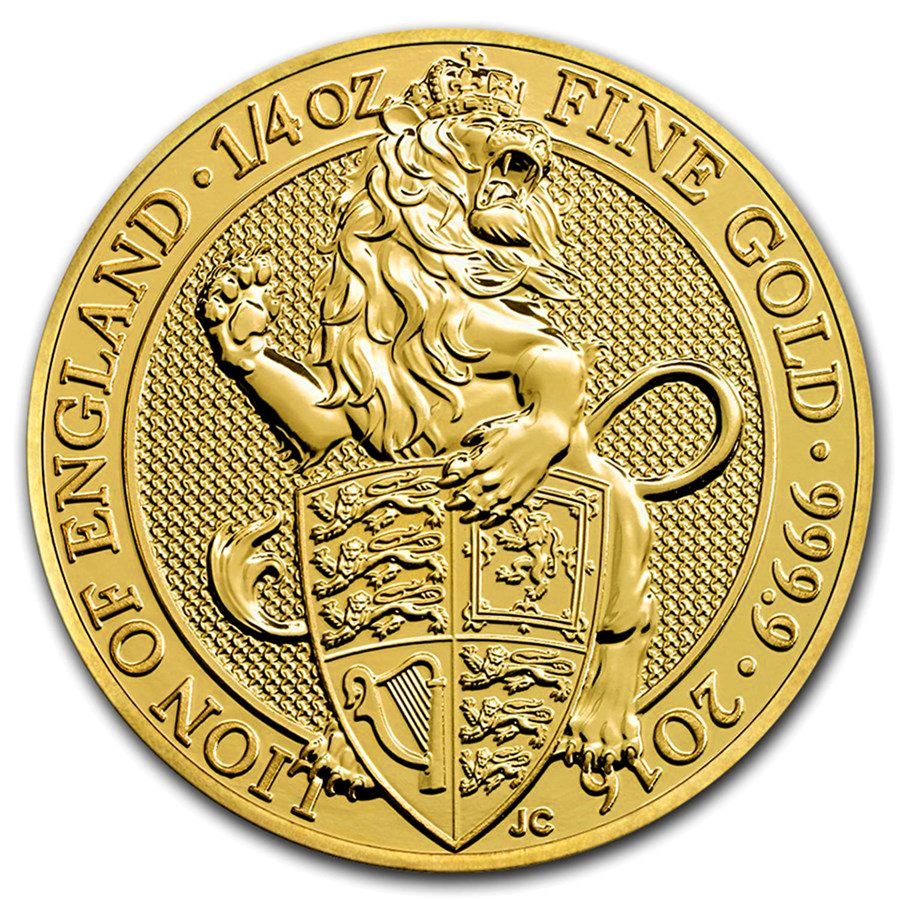 Product Details
Product Details
Now available in 1/4 oz Gold. This is the first release in an exciting new 10 coin series. The Queen’s Beasts celebrates the British Monarch and the centuries of fascinating heraldry that has been a part of their story.

Coin Highlights:
Display your 1/4 oz Gold Queen's Beasts: The Lion in style by adding an attractive display box to your order.

Add the first coin of this exciting new 10 coin series to your cart today!

The Barbary lion is a national animal of England. Lion was the nickname of England's medieval warrior rulers with a reputation for bravery, such as Richard I of England, known as Richard the Lionheart. Lions are frequently depicted in English heraldry, either as a device on shields themselves, or as supporters. They also appear in sculpture, and sites of national importance, such as Trafalgar Square. The lion is used as a symbol of English sporting teams, such as the England national cricket team.
The Queen's Beast coins are produced by the Royal British Mint. The series will include nine other animals that represent the genealogy of the queen. These beasts will include the griffin, falcon, black bull, yale, white lion, white greyhound, red dragon, the unicorn and the white horse. The reception was overwhelmingly good by the public upon its release. The 1/4 oz Gold coin makes a great addition to any portfolio because it provides excellent diversification. These coins are high in quality and value. Add the fractional Gold to your collection today.
The reverse of the coin depicts the heraldic lion. The lion is a symbol of strength and pride. The obverse of the coin depicts a portrait of Queen Elizabeth II, who was crowned in 1953. During the Queen's coronation, 10 beasts symbolically guarded Westminster Abbey. The Queen's Beasts is the inspiration behind the 10-coin series that will be rolled out in limited mintage every year. The coin's designer was Jody Clark, the youngest designer to have a design officially commissioned by the British Mint for use on a sovereign coin.
The Lion of England is the first beast to appear for the Queen's Beast coins produced by the Royal British Mint.
See More +

The 2016 Great Britain 1/4 oz Gold Queen's Beasts are high in value. The fractional Gold size also makes it affordable for beginner investors. Each Gold bullion coin consists of .9999 fine Gold, providing extra value to your collection. This British Gold coin is popular because it honors an important and symbolic piece of British history. Queen Elizabeth II was crowned in 1953, making her the 39th Sovereign. Buy the 2016 Great Britain 1/4 oz Gold Queen's Beast today.

I missed the one ounce version of this coin when it was first issued. Now its trading for almost twice spot! These quarter ounce versions are the next best thing. Awesome coin, smooth transaction. I highly recommend APMEX for buying coins and other precious metal items.

These are noteworthy in both Gold and Silver coins-

love it will buy 1 oz next

Beautiful coin, Great service as always from Apmex. Plan to collect the whole series as they come out both quarter ounce gold , And 2 ounce silver. Great contrast from the lion and the background.

I purchased two of the 1/4 Ounce Queen's Beasts Lion Bullion Coins. The design, low premium for such a gorgeous coin, and the beautiful design drew me in. One of them had a small spot in the background pattern of the Queen, but with such a fancy design, perfect strikes in .9999 are difficult I'm sure. Not enough to worry about. APMEX's Shipping and Packing are both AWESOME. They are goin to be my primary Gold and Silver supplier from now on. They do exactly what they say they will do, in exactly the time that they say. No Bull Here! APMEX is on time, with great products, and we are lucky to have access to such great service. APMEX, You are on the ball people! I appreciate You, and Your attention to detail even on small orders. My Brother and I both are APMEX customers for life! Thank You!

The only bad part about this coin is, your going to want to get at least a second or more because you are not going to want to part with the coin its so amazingly detailed and beautiful. This is only the first coin of the series as as you can tell from the Perth Lunar series, the value only goes up as coins like these get older so the coin is amazing for 2 reasons. It is an amazing detailed gold coin and only the first in a series! Also the coin comes in a APMEX plastic flip so i highly advise to buy a case, it came without a scratch and i want to keep it that way.

This coin is soooooo worth it!!!!

I absolutely love this series and plan to collect all coins in the series as they come out. These coins are beautiful in person the details are very impressive. This product is a winner and APMEX does a great job with offering them at a very fair premium. Can't go wrong with this series and I love the 1/4 ounce size in gold.