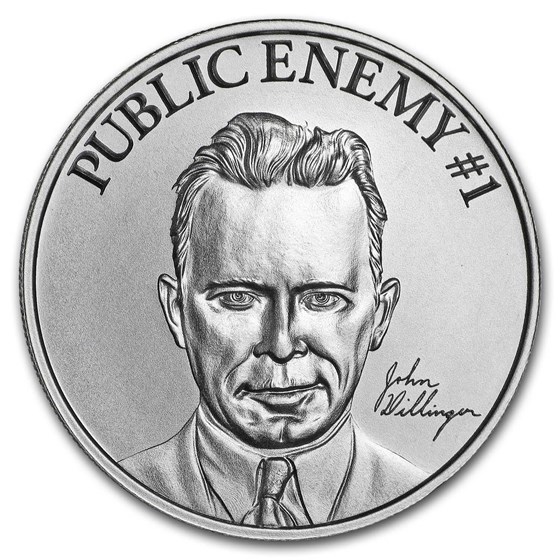 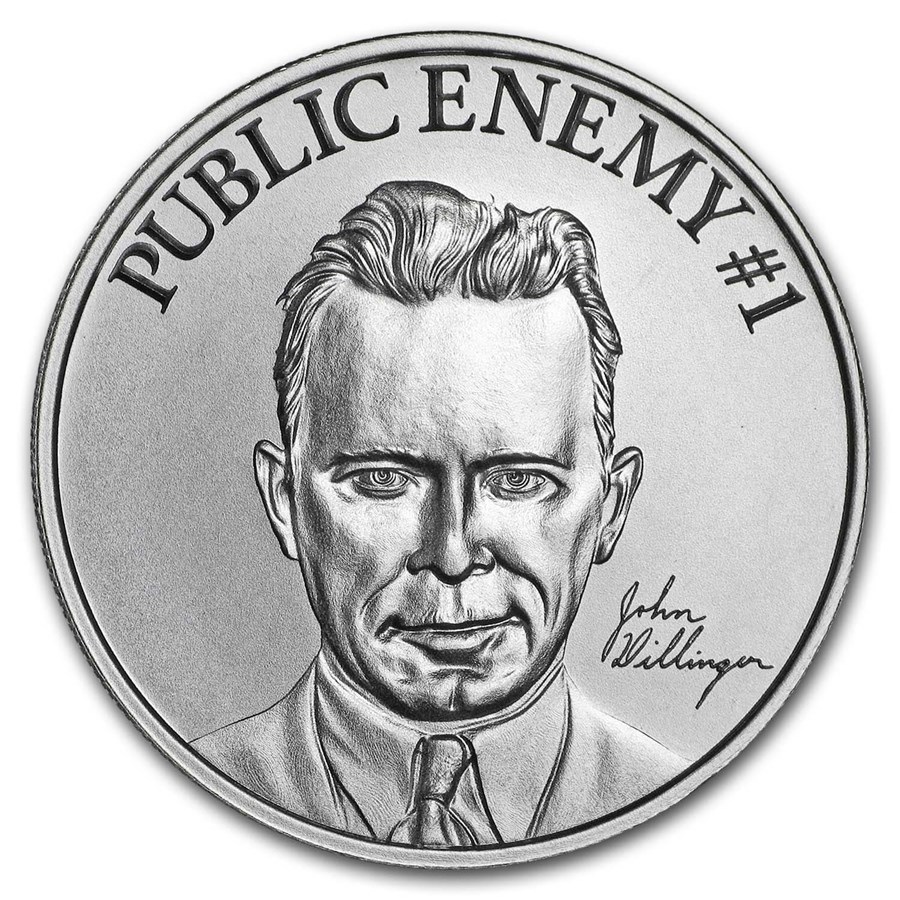 Your purchase is guaranteed to match the quality of the product shown. It will not be this exact item.
Product Details
Product Details
John Dillinger was a famous American gangster in the Depression-era United States. During his time he was accused of robbing 24 banks and four police stations. This highly detailed image of John Dillinger is captured in this 2 oz .999 fine Silver round.

John Dillinger was an American gangster in the Depression-era United States. He operated with a group of men known as the Dillinger Gang or Terror Gang, which was accused of robbing 24 banks and four police stations, among other activities. Dillinger escaped from jail twice. He was also charged with, but never convicted of, the murder of an East Chicago, Indiana, police officer who shot Dillinger in his bullet-proof vest during a shootout, prompting him to return fire; despite his infamy and unlike the other members of his gang, it was Dillinger's only homicide charge.

He courted publicity and the media of his time ran exaggerated accounts of his bravado and colorful personality, styling him as a Robin Hood figure. In response, FBI Director J. Edgar Hoover developed a more sophisticated Bureau as a weapon against organized crime, using Dillinger and his gang as his campaign platform. Dillinger is known to have participated with The Dillinger Gang in twelve separate bank robberies, between June 21, 1933 and June 30, 1934.

At approximately 8:30 p.m., Sage, Hamilton, and Dillinger were observed entering the Biograph Theater, which was showing the crime drama Manhattan Melodrama, starring Clark Gable, Myrna Loy, and William Powell. During the stakeout, the Biograph's manager thought the agents were criminals setting up a robbery. He called the Chicago police, who dutifully responded and had to be waved off by the federal agents, who told them that they were on a stakeout for an important target.

When the film ended, Purvis stood by the front door and signaled Dillinger's exit by lighting a cigar. Both he and the other agents reported that Dillinger turned his head and looked directly at the agent as he walked by, glanced across the street, then moved ahead of his female companions, reached into his pocket but failed to extract his gun, and ran into a nearby alley. Other accounts stated Dillinger ignored a command to surrender, whipped out his gun, then headed for the alley. Agents already had the alley closed off, but Dillinger was determined to shoot it out.