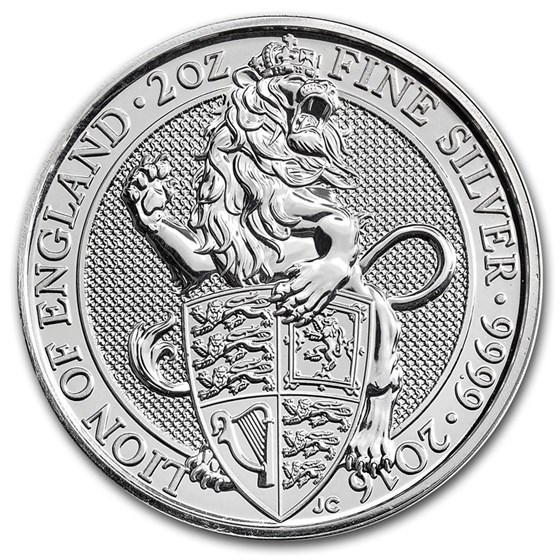 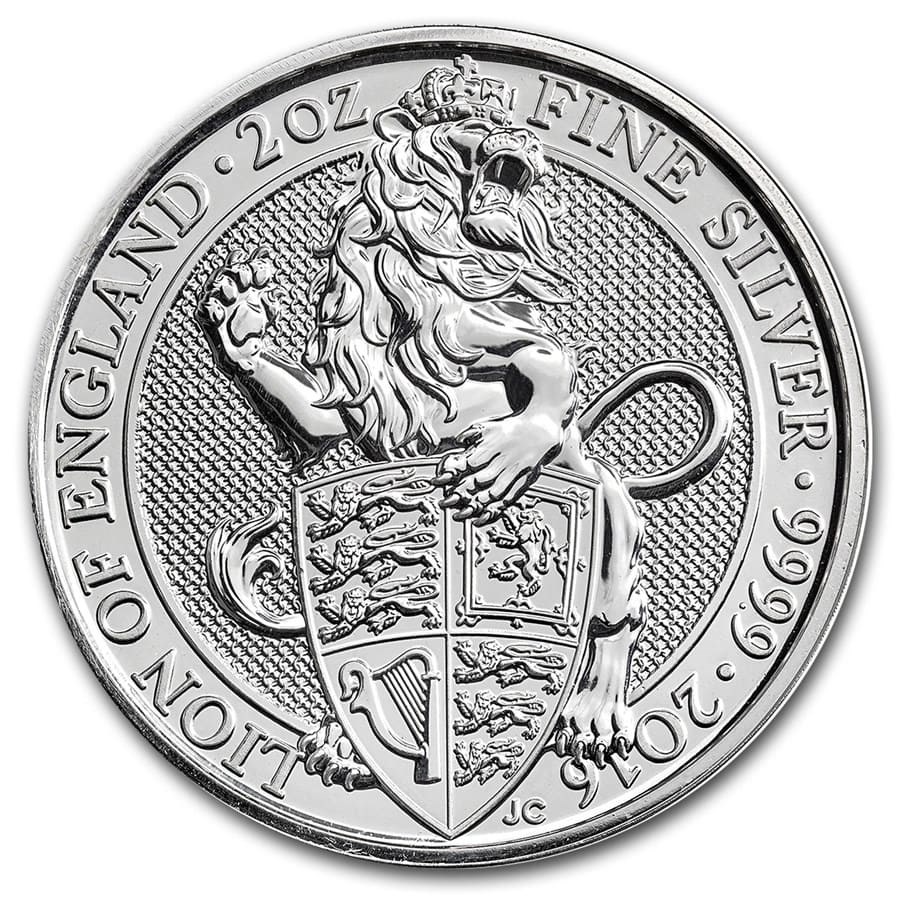 Product Details
Product Details
This is the first release in a 10-coin series of majestic creatures from The Royal Mint. The Queen's Beasts series features the heraldic beasts that stood guard at Queen Elizabeth II's coronation.

The 2016 Queen's Beasts Silver coin is the first 2 oz Silver British Bullion coin from the Royal Mint. Add the first coin of this exciting 10 coin series to your cart today!

The lion and England have a long history together. The Lion of England was a supporter of the Royal Arms, and the lion was a symbol for bravery and strength. The lion is an important animal and symbol for England whose image is used throughout English culture and society. It is appropriate for the 2016 Great Britain 2 oz Silver Queen's Beasts series to depict the lion with its inaugural release. Buy your British Silver coin today and diversify your collection.

The 2 oz Silver coin is the first of its kind produced by the Royal British Mint.

The Queen Beasts in 1 oz or higher have rocketed in value all of a sudden I like the 2 oz and 10 oz when I can afford them and they are available. The Proofs in any form is impossible to get and if lucky to find one in stock they are not inexpensive.

I've recently become aware of the Queens Beasts series collection. I liked the shiney polished mirror like accents on the silver Brittanias. I searched APMEX and saw the 9999 silver Queens Beasts. Love at first sight! This coin is beautiful and my favorite! I've bought all 7 five oz. coins currently available. I can't wait to get the last 3 in the series. APMEX is my go to dealer!!!

Would have preferred a capsule, envelope abrasively damaged by this very nice undamaged coin. First buy waiting on and will continue further buys

exceptional for the value

exceptional coin at a best in the market place price. As always, APMEX is really a great company providing items that I could not otherwise obtain.

The Lion is the most beautiful thus far out of all of the released series.

Nice coin but don't get the capsules

Nice coins with a reasonable premium. Don't get the Coin Safe 39mm capsules though. The perimeter of these coins are jagged and they don't fit snug to the capsule. The capsules will break.

I ordered ten of these coins expecting that they will be in a tube. APMEX placed them on thin individual flimsy plastic bags (not even standard plastic flips for coins) and they arrived damaged and dinged at the edges since they are thick and heavy coins. Now I can probably only sell them at melt value of silver! Go buy somewhere else where they could give you a tube for these coins!

Merchant response: We are very sorry to hear of the condition in which the 10 coins arrived. We will follow up with you shortly to further assist.