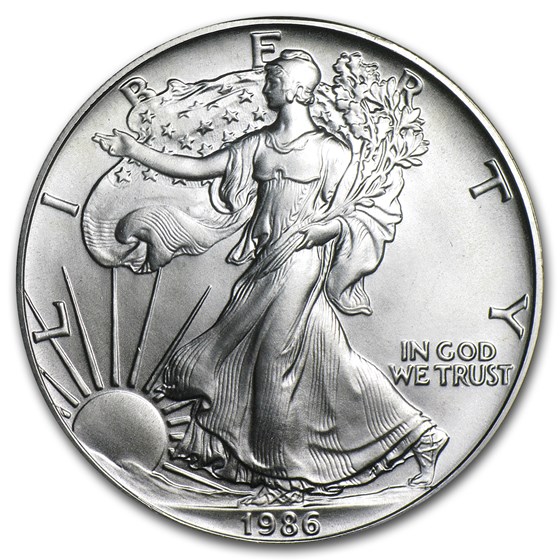 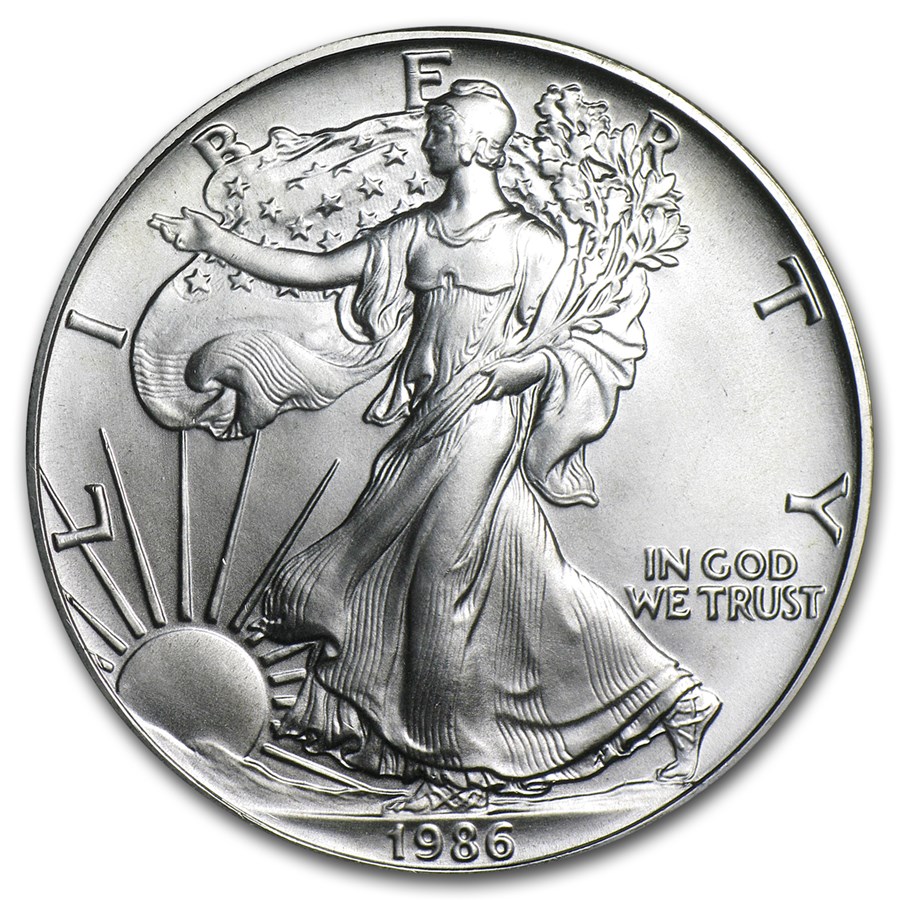 Product Details
Product Details
The inaugural issue from the annual American Silver Eagle program by the U.S. Mint displays one of the most popular and beloved designs in American coinage. Combined with its iconic design and .999 fine Silver content, further adds to its bullion appeal.

One of the most popular designs in American coinage, the Silver Eagle combines beauty with Silver bullion appeal. Add the 1986 Silver Eagle to your cart today!

Find the price per ounce of Silver and other PRecious Metals pricing with APMEX.

History of the American Silver Eagle Program
The U.S. Mint attempted to establish selling Silver bullion in the 1970s and early 1980s to help reduce the Defense National Stockpile. The reasoning was that domestic needs exceeded that of strategic needs. Many refiners had actually opposed the plan due to concerns of diminishing the need of in-state mining and possible reduction of Silver spot at the time. Throughout the back-and-forth, the United States did end up selling-off large amounts of Silver (roughly 105 million troy ounces) but not as coin, as they had originally intended. When this happened, it did in fact cause the price of Silver to drop immediately.

Many traders started unloading futures with the anticipation that price would fall, which it did. Over a span of several years and suspensions, it wasn’t until June 21, 1985, that the senate finally agreed to an amendment by a voice vote. The amended bill was signed by President Reagan on July 9, 1985. The bill, know as the “Liberty Coin Act” authorized the law of the American Silver Eagle program with an effective date of October 1, 1985, but came with stipulations that no coins may be struck or sold until September 1, 1986. Finally, after all of this, the first American Silver Eagle was released on November 24, 1986, which has gone on to become one of the most beloved, best-selling coins in the world.

NOTE: The coins you receive may exhibit some level of natural toning and/or oxidation such as spotting. This is a normal process that and can occur over time when exposed to hydrogen sulfide which is naturally occurring in the air.
See More +

Silver eagle/1 oz silver libertad's are both equal'y my favorite I almost have 20 "one full tube" of the 86 SE in all BU condition. The 86 SE must have use a special dye for the first run 35 years ago. cause they are gorgeous.

When I first ordered this coin I guess I expected it to be a very high quality coin.. I didn't understand the grading of coins. But as this is a BU coin which equates to around MS 63, I'd say the coin looks pretty good. It's nice to have a 1986 ASE. Be even nicer to have one in MS70 but then you talking a lot of money. Anyway, thanks again Apmex!

Ordered one of these to round things out and received it in BU condition. Very nice to have an older Silver Eagle. Thank you APMEX.

This is a great idea to start to collect

I began my collection of the Eagles with the first coin, and compared to the 1988 Silver Maple I also ordered, this coin showed some slight patina. But still a pretty coin for the age.

I bought two of these first-year coins on an "AlertMe!" and they look perfect, just as good as my 2016 coin! There are some interesting design changes between the two. The 1986 coins use a fancier serif font for the lettering that stands out better than the font on the 2016 coin. Also, the Mint has added some fine detail to Liberty over the years. For example, she's noticeably bustier in 2016. At first I thought my 1986 coins weren't as well struck, or maybe the dies had been over-polished, but then I noticed her collar is definitely different. So I guess someone decided Liberty looked too flat-chested on the first coins. It's fun to see how the design has evolved over the years!

First of the best!

First year of the Silver Eagle. I love the design of these coins and had to pick up the first year. Was not disappointed at all. If you are going to collect these coins, no better place to start then the first year.