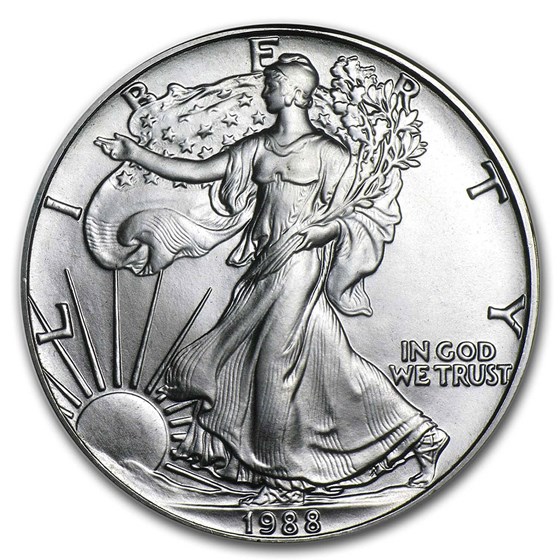 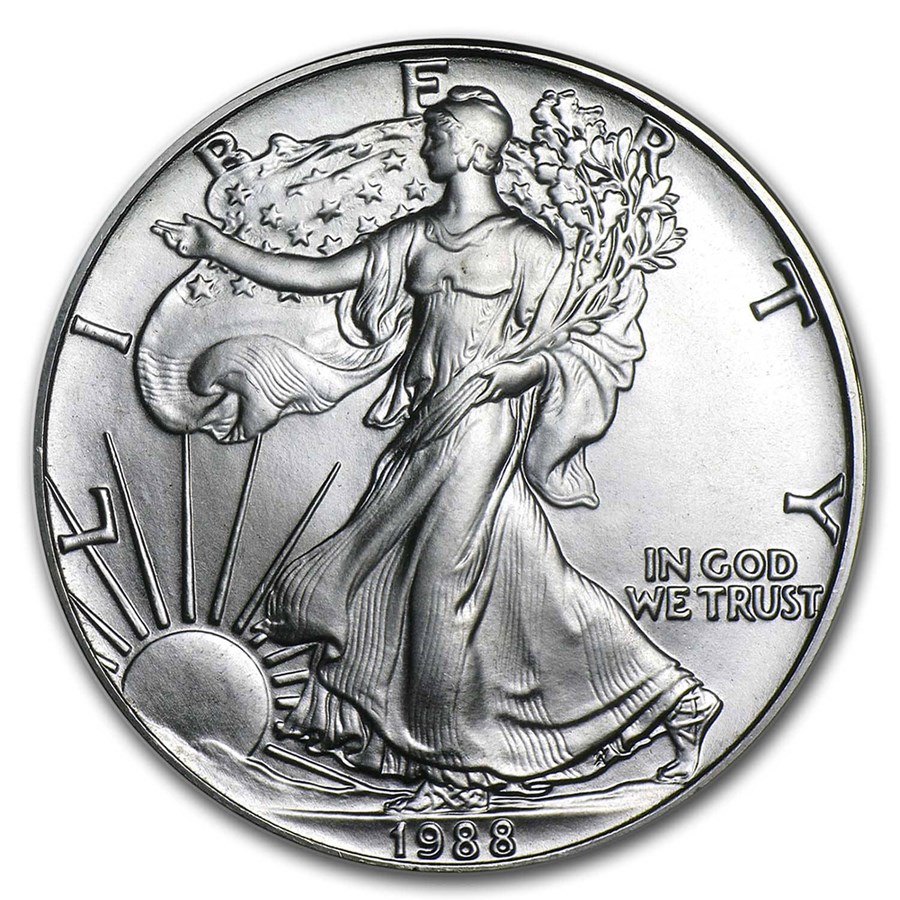 Product Details
Product Details
The third issue from the annual American Silver Eagle program by the U.S. Mint displays one of the most popular and beloved designs in American coinage. The iconic design and .999 fine Silver content further adds to its bullion appeal.

One of the most popular designs in American coinage, the Silver Eagle combines beauty with Silver bullion appeal. Add the 1988 Silver Eagle to your cart today!

History of the American Silver Eagle Program
The U.S. Mint attempted to establish selling Silver bullion in the 1970s and early 1980s to help reduce the Defense National Stockpile. The reasoning was that domestic needs exceeded that of strategic needs. Many refiners had actually opposed the plan due to concerns of diminishing the need of in-state mining and possible reduction of Silver spot at the time. Throughout the back-and-forth, the United States did end up selling off large amounts of Silver (roughly 105 million troy ounces) but not as coin, as they had originally intended. When this happened, it did in fact cause the price of Silver to drop immediately. Many traders started unloading futures with the anticipation that price would fall, which it did. Over a span of several years and suspensions, it wasn’t until June 21, 1985, that the Senate finally agreed to an amendment by a voice vote. The amended bill was signed by President Ronald Reagan on July 9, 1985. The bill, know as the “Liberty Coin Act” authorized the law of the American Silver Eagle program with an effective date of October 1, 1985, but came with stipulations that no coins may be struck or sold until September 1, 1986. Finally, after all of this, the first American Silver Eagle was released on November 24, 1986, and has gone on to become one of the most beloved, best-selling coins in the world.

The Design (1986 to 2021)
The obverse (front) of the coin was taken from the “Walking Liberty,” originally designed by Adolph A. Weinman, in 1916. The iconic design had already been a public favorite and one of the most beloved of any United States coinage of modern times, which made it an instant favorite among collectors and enthusiasts once released. The reverse (back) was designed by John Mercanti and portrayed a heraldic eagle behind a shield. The eagle holds a banner in its beak while grasping an olive branch in its right talon and arrows in its left, an image that echoes the Great Seal of the United States. Above the eagle and below the legend are 13 five-pointed stars representing the original 13 colonies.

NOTE: The coins you receive may exhibit some level of natural toning and/or oxidation such as spotting. This is a normal process that and can occur over time when exposed to hydrogen sulfide, which is naturally occurring in the air.

Coin has a couple dings but looks good in the hand. A couple old fingerprints that are barely visible. Overall nice condition. 8/10

My first coin was pretty filthy but Apmex took it back no problem. The second coin arrived exactly how I expected it to. I wanted an older coin. This was priced fine. And it looks great.

As usual APMEX sent me a beautiful coin for my collection. This is the reason I continue to shop with them. My coins always arrived well packaged and in a timely manner.

More Eagles to the collection

Eagle arrived in BU condition and quickly. Great way to complete a collection. APMEX has been phenomenal in delivering a great product.

Purchased to finish one of my books.

As usual, APMEX does it again! I'm really happy about the service they provide and the silver is fantastic!

A beautiful BU gem! A bit of a higher premium though.

GREAT SALE AND A GREAT COMPANY

I HAVE DONE BUSINESS WITH THIS COMPANY FOR 3 YEARS NOW. THEY HAVE ALWAYS MADE SURE THAT I WAS SATISFIED

The best dealer on the Web period! Super fast delivery and orders show up as promised in awesome condition. Thank you APMEX