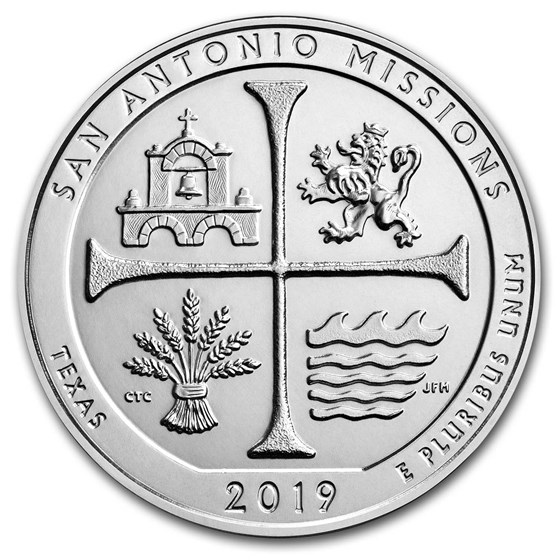 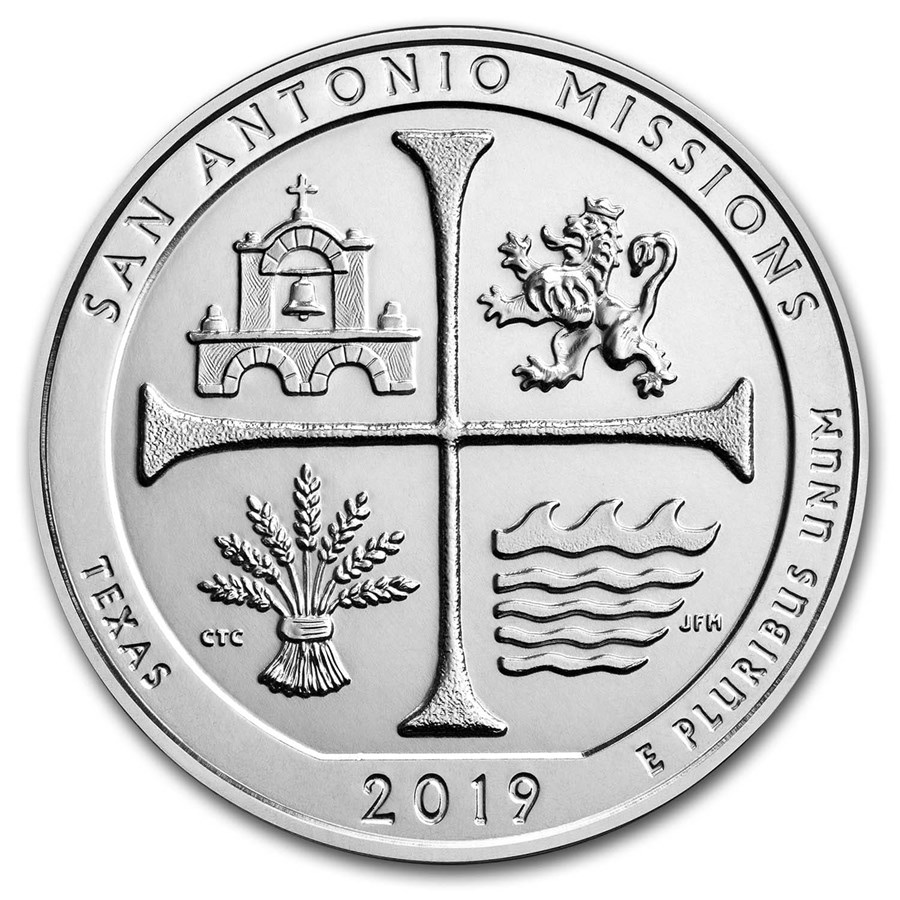 Your purchase will match the quality of the product shown.
Product Details
Product Details
San Antonio Missions National Historical Park in San Antonio Texas is a UNESCO World Heritage site. This coin is the forth release of 2019 in the U.S. Mint's popular 5 oz Silver bullion America the Beautiful series.

This coin commemorates the San Antonio Missions National historical Park in San Antonio Texas. This is the 49th release of 56 coins. These coins are sought after by investors for their .999 fine Silver content, and demanded by collectors for their artistic value.

San Antonio Missions National Historical Park is a National Historical Park preserving four out of five Spanish frontier missions in San Antonio, Texas along the San Antonio River. The fifth mission is well known as the Alamo, but is not part of the park as it was operated by the Daughters of the Republic of Texas until July 2015, when management was turned over to the Texas General Land Office. All five locations are designated as a UNESCO World Heritage Site.

These outposts were established as early as 1690 by Spanish missionaries of various Catholic orders. They were used to spread Christianity among local natives and formed a key network for Spanish colonization of the area. The missions from north to south are Mission Concepción, Mission San Jose, Mission San Juan, and Mission Espada. The Espada Aqueduct is also part of the park.

New designs for the American the Beautiful coins are released each year, with 5 oz bullion versions as well as quarters meant for circulation. The 5 oz Silver coins are distributed by the United States Mint's network of licensed bullion dealers and sold through authorization from the National Park Service. Because the ATB series is an official release by the U.S. Mint, high standards of quality and finish can be assured. The Silver bullion used in the 5 oz San Antonio Missions National Historical Park coin is certainly valuable as an investment and the limited release design adds collectible value, too.

For investors that have a deep appreciation for U.S. history, the San Antonio Missions America the Beautiful 5 oz coins are an ideal fit. Made from quality .999 fine Silver bullion, these coins are designed for both coin collectors and those looking to add Precious Metals to their portfolio. The entire America the Beautiful series pays homage to the landscape of the country, depicting historically significant locations from sea to shining sea. The San Antonio Missions National Historical Park was chosen for the 2019 issue because of the important role this area played in the colonization of South Texas.

All coins from the series are struck with the same obverse portrait, depicting George Washington in a restored version of the design made by John Flanagan for the 1932 Washington Quarter. The reverse is struck with an original rendering of the San Antonio Missions National Historical Park. Four of the five Spanish frontier missions originally built around San Antonio, Texas, make up this National Park. These structures were built by several religious orders to spread Christianity in the area and stretched across the Spanish Southwest throughout the 17th, 18th, and 19th centuries.

The historical park featured on the 2019 San Antonio Missions 5 oz Silver coins has been designated a UNESCO World Heritage site.

Originally established as the Mission Parkway in 1975, it was listen on the National Register of Historic Places. The park includes a total of 84 separate historic places found along the San Antonio River in the south part of San Antonio. In November 1978, it was officially announced as a National Historical Park. Certain parts of the four missions are still active parishes owned by the Archdiocese of San Antonio. More recently, the Mission Reach Ecosystem Restoration and Recreation project was finalized, which added trails for hiking, biking and paddling to the San Antonio Missions. These pathways create connections for visitors to several other sites, including the Mission Concepcion, Mission San Jose, Mission San Juan, Mission Espada and the San Antonio Riverwalk. Because this area is so important to American history and regional culture, the site became the obvious choice to be depicted on the 2019 America the Beautiful Silver coin series.

Silver, like other Precious Metals, has long been known as a safe-haven investment and hedge against economic inflation. Collectors can purchase with confidence, knowing the quality of these coins is investment-grade. Like most bullion coins, these 2019 Silver coins satisfy precise specifications for weight, size and .999 fineness. All 5 ounce America the Beautiful coins boast great consistency of finish, so collectors who purchase coins from different years can expect a matching collection.

Really loved the size of this coin. It’s a blown up quarter with some great history on the back. Looks awesome!

I really like this design. The mission design split at every corner looks impressive.

I will buy this item again!

The piece was larger than I expected. I think it is a great piece and I will by more of them.