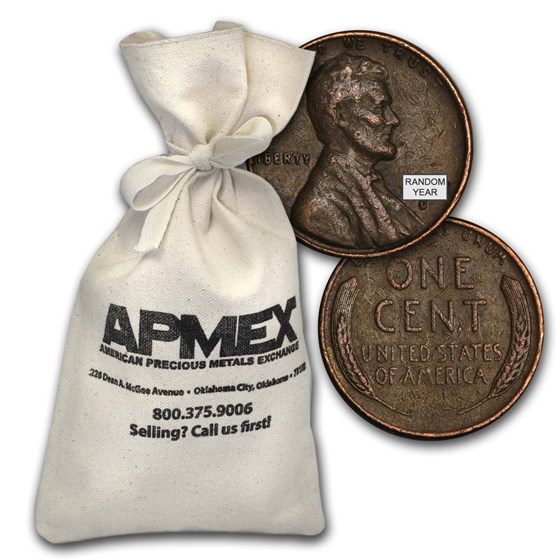 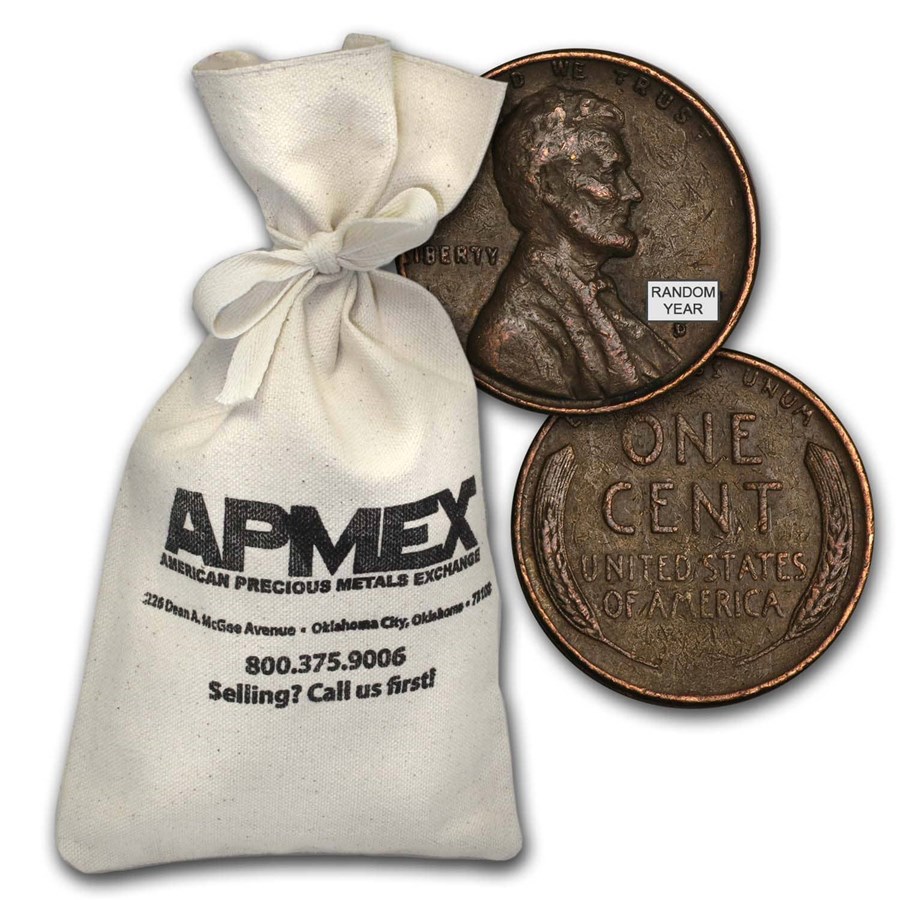 Product Details
Product Details
We obtain these $50 face value bags from multiple vendors and ship them out as is. There are no guarantees on what you will find, so this is a great product for an undiscerning customer looking for a selection of wheat cents.

Product Highlights:
Protect your coins from fingerprints by adding these cotton gloves to your order.

Who knows what you will find in these bags! Add several of these 5,000-Count Wheat Cent Bags to your cart today!

Dates and compositions you receive may or may not vary, determined by stock on hand.
Related Searches

Dive in to the popularity of the Wheat Back Penny.

While the Wheat Penny originally was minted in 1909, it did not gain popularity until 1917, when a luxury tax was introduced and cents were needed to distribute change after a transaction. Prior to this, the Indian Head Cent design was more popular than Wheat Pennies. In 1922, Wheat Pennies saw a lower demand as the Great Depression hit and production of all coinage decreased. During World War II, the Copper price per ounce skyrocketed and the coin, which had increased in demand after the Great Depression, transitioned to a Zinc-coated steel composition, known as the steel cent, which proved unpopular in the public. The next Wheat Pennies were made of a 95% Copper and 5% Zinc composition until the Wheat Cent was retired in 1958.

The Wheat Back Penny design changed with the times.

The Wheat Back Penny underwent multiple changes and has more distinguishing marks than many other U.S. Mint coins despite having only a 50-year minting span. The actual design of the Wheat Pennies changed in 1916, removing the wrinkles on President Lincoln’s cheeks to help extend the die life of the coin. The composition of rare Wheat Pennies also changed, from Copper and Tin, to Zinc and Iron and then to Copper and Zinc. Interestingly, while the high Copper price per ounce influenced the decision to change the coin’s composition, the treasury did not consider the corrosion level of the metal, which influenced the last composition change of the coin after the public complained about spots on the coins.

The Wheat Cent features President Lincoln because the coin's debut in 1909 marked the centennial of Lincoln's birth.

The history of the Wheat Back Penny

Wheat Pennies get their name from the pattern of durum wheat surrounding the edges of the reverse. Wheat Penny bags feature U.S. Mint coins that were used for decades, some with designer Victor David Brenner’s initials on the lower edge of the reverse and some without. Commissioned by President Theodore Roosevelt, the Wheat Penny went through several renditions as Roosevelt and Brenner went back and forth on details such as where Brenner’s name should be placed and whether the word “United” should be included. In the end, these Wheat Pennies were struck in Philadelphia and San Francisco in 1909 and expanded to additional mints throughout their series, which concluded in 1958.

Why invest in Wheat Pennies?

The Wheat Back Penny features an assortment of unique variations that set the coins apart from one another, making the coins an exciting addition to your collection. For example, Wheat Pennies from the Philadelphia Mint feature no mintmark, while those cent coins struck at the San Francisco Mint bear the "S" mark under the date. Some of the most rare Wheat Pennies, with only 484,000 released into circulation, bear designer Victor David Brenner’s initials, making these select coins even more valuable to numismatic collectors. Buying Wheat Cent bags allows collectors to search the 5,000 included Wheat Pennies for their favorite, although there is never a guarantee on what you will find.

44% of reviewers recommend this product

First bag we got were actually mixed dates the next two bags we bought were absolutely junk nothing older then 40 no more buying these that’s for sure.

Title infers that you will get a mix of dates and mint marks. Not so, all cents between 1940-1958. No 1943 steel cents. Only 5 s mints! Plenty of green corroded cents though. These have been picked over multiple times. That's why they offer bags of only teens, twenties. No fun in looking at this stuff!

I'm over halfway through the bag and there isn't the slightest joy in a treasure hunt as it's overly clear, there is no treasure. Just an extremely overpriced bag of pennies falsely claiming to be 'random' 1909-1950's. So far, there is not a single penny below 1942 and 2/3rds are from the 50's. I'd give it one star because it was shipped promptly and the box didn't bust open in transit; because, though heavily disappointed, I still love pennies and history; and because the overall roll price is not That bad for wheats. But -4 stars for the description vs the actual product.

Merchant response: APMEX does have a returns policy. Please let us know any time you are not happy with a product you receive.

Well, it's always a crap shoot on a product like this. In hopes that they were actually "random" cents from 1909 - 1958 I found that was not the case at all. Well over 96 % were 1940 and up, no steel cents and everything below 1940 were in less than good condition. Other posts/reviews have said the same. I am not slamming APMEX because there service has always been outstanding but for this product it is buyer beware. Who knows, someone might actually get a truly random lot but I did not.

Wow, this is a heavy bag. I bought two. They are hard to find and if you look elsewhere, you will see APMEX is very competitively priced on these wheat pennies.

I will buy this again.

Most dates higher than 1940, but it was as expected. Had a few dates in the 30's, anything older were culls. Have had success with other bags so I would definitely buy again.