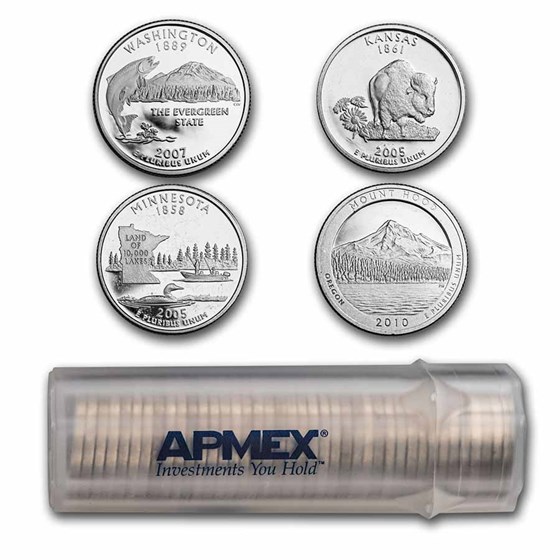 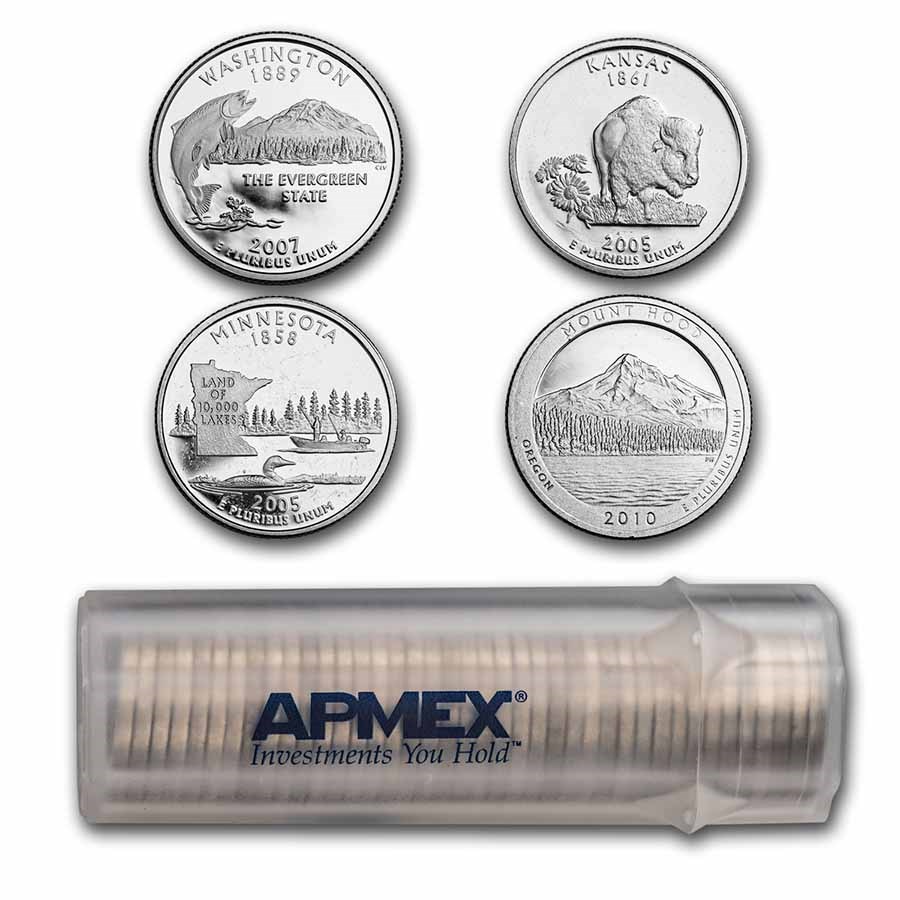 Any quantity only $7.99 per oz over spot

Product Details
Product Details
Any quantity only $7.99 per oz over spot
These $10.00 face value 40-coin rolls of Proof 90% Silver Statehood and America the Beautiful Quarters are minted from 1999-2015. These proof coins feature sharp design elements.

Product Highlights:
Protect your investment by adding a cloth money bag to your order today!

These rolls are a great way to add Silver to any investment portfolio. Add several $10 Face Value Rolls of 90% Silver Statehood/ATB Quarters to your cart today!

Most of these coins are really nice. However, a few of them may exhibit contact marks or some form of handling imperfections. Silver Quarter rolls may come with mixed dates or include all the same date and will be of our choice based on availability.

Pre-1965 90% Silver coins, sometimes referred to as junk Silver or scrap Silver, are a great way to start your Silver investments. These Silver coins were pulled from circulation with the introduction of copper/nickel clad coins and the rising demand of Silver. The public saved them for their 90% Silver content as a rainy day fund they can fall back on.
Related Searches

Buy these collectible Silver coins to add to your Statehood Silver or America the Beautiful collection.

When Statehood Silver Quarters were first issued in 1999 no one knew just how popular these U.S. Silver bullion coins would become. Since then, these Silver quarters have become a favorite among collectors, and the following U.S. Mint Silver quarter series, the America the Beautiful coin series, has followed suit. Buy these collectible Silver coins in a roll of 40, and you just might get the Silver quarter to complete your collection. Buying Silver coins without knowing which ones you will get adds an extra layer of excitement to the coin collecting process.

90% Silver coins tend to hold their value when other investments falter.

Many invest in 90% Silver coins because they provide an affordable way to add a Precious Metal to investment portfolios in order to offset the potential of traditional investments like stocks and bonds faltering. Historically, the Silver price tends to move conversely to these types of investments when the economy weakens. Many investors who buy Silver plan to hold the physical asset for at least three to five years, and they take into account the Silver price history when making their decision to invest in Silver. When buying Silver, consider using the dollar cost averaging method, where you invest equally over your investments, as a conservative way to add Silver over time, allowing for shifts in the market.

The history of these Silver Quarters

Silver, as found in 90% Silver coins, has been mined for over 5,000 years, and it has been considered a valuable resource by the many people who have come into contact with it over the years. The same way Silver quarters are used for buying and selling, ancient cultures used Silver to trade. These Silver quarters have a legal tender value of 25 cents; however, their primary value is in the 90% Silver content and their slight collectibility. Buy Silver, and own a Precious Metal that ties you to the past.

Why invest in 90% Silver coins?

Many buy these Silver Quarters as an investment, and sock them away for a “rainy day,” while others buy these collectible coins to complete their Silver Statehood coin collection or their America the Beautiful Quarters coin collection. Unlike circulated U.S. quarters, these proof Silver quarters contain .900 fine Silver, making them ideal for Silver investors. Plus, these Silver coins have a low premium over spot price, which creates the opportunity to buy Silver at a lower price point. Silver quarters are a great way for new investors to start their Precious Metals investment portfolio.

I purchased one roll. All coins were shiny bright, no toning. I received 9 different state coins out of the bunch. About a dozen were TX and about ten were FL; others VT, AR, IO, WI, MI, AL, NY. Would like to have received more variety of states so only 4 stars. These seem like a great buy as you aren't paying much over spot for a minty shiny coin. My follow up purchase was mint sets to get a wider variety but paid a little more premium to get it.

For the price of these coins it’s hard to beat. I purchased two rolls. I got 39/50 states. Three territories and three different ATB parks. I’ll buy a couple more rolls in the near future for sure.

So far I've ordered three rolls of these quarters. The first two rolls were all great quality ATB but there wasn't a lot of variety. The third roll I got today had 25 different state quarters in it. I was thrilled! Thank you APMEX for excellent service and the fast shipping! I will buy more of these soon.

Probably the best deal at APMEX. I would like to fill a book with these coins. Buy with cotton gloves.

I bought 4 rolls and only received 10 different states. I was hoping for more. Over all Great value. These are 90% silver proofs folks & most of them were perfect! When silver goes way up these coins go up waaaaay more. I am definitely buying more while the price is low.

I have gotten 2 rolls, as two separate orders. Each contained 50 coins of the same type. (50 2016 Cumberland Gap. and 50 Alaska.) I don't mind, the coins were in excellent condition, but I thought others might want to know.

First roll I ordered was (33) 2011 Olympic Washington, (3) 2012 Acadia, (3) 2012 Denali (all discolored, brown), and (1) 2012 El Yunque. I was disappointed in the variety, but so impressed with the quality (So shiny! Full-silver reeded edge!) I still ordered another roll. Second roll had (27) different states, Guam, and (3) national parks. Very nice. I need another roll of quarters like I need a hole in the head, but I'll probably order another just to see what I get.

I have purchased several rolls of these proof quarters and all are near perfect, about a dozen or more fore every roll were possible 70 condition. We'll see after I send them to be graded. One that was toned and in otherwise perfect condition, with perfect even toned centers on either side.

It is BUYIN' time! Apmex is the place!

This is a rare time. A time of unprecedented manipulation of silver prices by central banks and their minion commercial banksters. When the true-value price of physical silver easily exceeds the all-time $50 spikes of 1980 & 2011, and we can still buy material like this as cheap as it has been in recent dips, and right now for that matter; it just makes sense to grab on to as much of your FAVORITE PHYSICAL FORM of silver as you are able to, as soon as you can. NOW IS THE TIME. Don't wait any longer for the big clues, as they are gonna be in the upward direction! BUY NOW! Go do it. Clear the Apmex shelves! Any form is good, as I've never had a problem with this company. They truly perform, and have been very trustworthy. Most important point is that it DOESN'T MATTER WHICH U.S. SILVER COINS ARE YOUR FAVORITE, as all of them are your best buy! They are universally-recognized for their inherent U.S. mint value! They are not serial-numbered, or individually-identified, and are supremely liquid in natural barter situations. Great investment for the coming fiat currency ponzi scheme crash, and rush to gold and silver, AND, protection for the prepper survivalist. Grab a few rolls, or a few hundred rolls of these right away!

Good Condition or Good Variety, but not both.

I bought 5 rolls of these, and of only my experience, these will either be in really nice condition, or will have a great variety, but not both. Two rolls were 2009 only, but were in immaculate condition (mirror finish, no scratches or tarnish). The other three had awesome variety (40/50 states, no 1999, all 6 territories), but weren't in as good of condition as I had hoped. Based on the product description, I figured there would be a certain (low) percentage that showed wear, toning, scuffs/scratches, etc., but the three rolls that had good variety all looked like they were in a bag and jostled (at least, the two rolls of 2009's were in noticeably better shape). I pulled 4 coins from these rolls that were in good enough shape to go in my State collection. Aside from that, nearly everything was State Quarters (not a negative, just informational). I only pulled 10 ATB quarters (3 unique) from the set of 5 rolls. There were also 2 pretty nice pre-1999 quarters mixed in (1961-P, 1995-S). My recommendation to anyone looking to these as a potential means of building State/ATB Proof sets (since building is, IMO, more satisfying than just buying a set outright) would be to either buy individual coins or just buy the whole set, when compared to these rolls. In the end, I'm a little underwhelmed at the overall condition. Hopefully my expectations weren't unrealistic, but I had higher hopes from the way these were described. I can't speak to the sellability since I haven't tried, but it's silver, so I'm sure I wouldn't get any less than other 90% coins. Based on condition, I think the sale interest would be the silver more than these being State Proofs. I don't regret my purchase and plan on many more with APMEX, but I probably would have spent the money differently knowing the outcome. Compared to other "junk" silver, these were a pretty good buy.