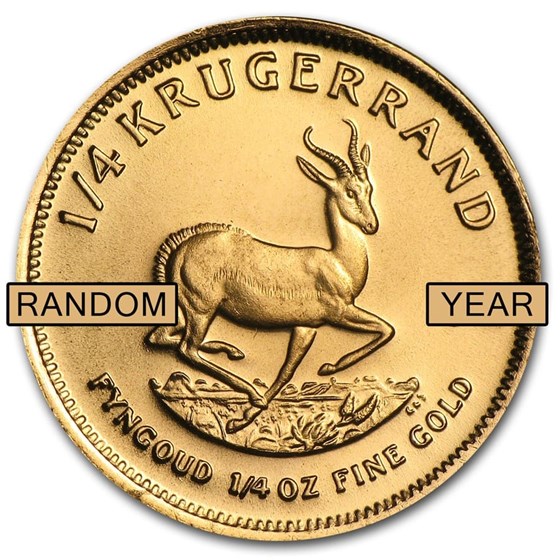 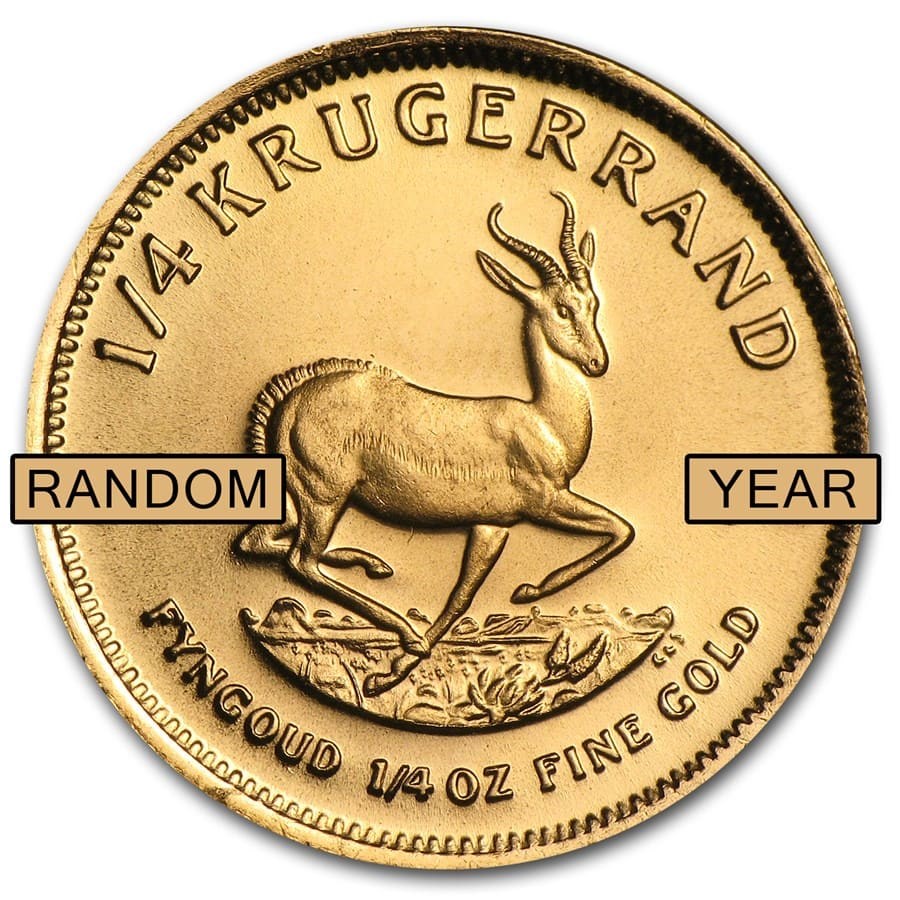 Important Note
Dates on these random year coins will be of our choosing and may or may not vary, determined by stock on hand.

Krugerrand Series
First introduced in 1967, the Krugerrand was the world's first modern Gold bullion coin in the world and this Gold bullion coin series is still a favorite of collectors and investors today. In 1980 fractional Krugerrands were first minted. The Krugerrand were minted to assist in promoting South African Gold to the international markets. Krugerrands were never assigned a face value but were designed to derive their value from the price of Gold at the time they are traded. The Gold Krugerrand is prized around the world, with a highly sought-after design inspired by history. They feature the South African Republic's first president, Paul Kruger. On the reverse, a springbok, which is the national animal, and the date of minting appear. On the Krugerrand Gold coin, the springbok seems to be jumping into action, while President Kruger is a reminder of 19th century South African political and military affairs.

The South African Gold Krugerrand is one of, if not the most recognizable Gold bullion coins in the world. First produced in 1967, the Krugerrand was the world’s first modern bullion coin. Available in 1/10 oz, 1/4 oz, 1/2 oz and 1 oz Gold coins, this iconic bullion coin is a favorite of investors and collectors alike for its Gold content, historical significance and beautiful design.

The obverse of the coin features the profile of Paul Kruger, the first and only president of South Africa. The reverse depicts a Springbok antelope, a symbol synonymous with South Africa. The word “Krugerrand” comes from President Kruger’s last name and is combined with “rand”, the currency of South Africa. In the late 1960s and early 1970s, South Africa produced 75 percent of the world’s Gold, and by 1980, the Krugerrand accounted for 90 percent of the global Gold coin market. The coin was so popular it inspired other countries like the United States, Canada and the United Kingdom to produce their own Gold bullion coins. Despite the Krugerrand’s popularity, due to South Africa’s system of apartheid, many Western countries placed sanctions on South Africa and banned the import of Gold Krugerrand coins from the 1970s to 1994. Because of this, production levels of the Gold coin have varied greatly since 1967, but the South African Mint produced the most coins before the sanctions were put in place.

Stephanus Johannes Paulus “Paul” Kruger, often referred to as Oom Paul (“Uncle Paul”), was one of the most prominent military and political figures of 19th-century South Africa. Kruger was president of the South African Republic, also known as the Transvaal, from 1883 to 1900 and was the face of the Second Boer War from 1899-1902. This war between the United Kingdom and the Transvaal and its neighboring Orange Free State came about because of conflicting ideologies of imperialism and republicanism, the discovery of Gold on the Witwatersrand, tension between various political leaders among many others. Kruger’s cause was ultimately unsuccessful and he was exiled to Europe before a treaty was signed annexing the Transvaal and Orange Free State to Britain. To this day, Kruger remains a divisive figure in South African history. Admirers of Kruger consider him a tragic folk hero who was able to unite and defend a maligned nation, but to critics, he was the champion of an ignoble cause and a suppressor of the native Africans in the region. Regardless of these differing viewpoints, Kruger was undoubtedly responsible for shaping much of South Africa’s history.

The South African Mint was first established by President Kruger in 1892 in order to address the serious shortage of coins in circulation and to provide a means for South Africa to produce its own currency. After Britain occupied South Africa as a result of the Second Boer War, all production at the mint ceased until the Mint Act of 1919 established the Royal Mint in Pretoria. In 1941, Britain broke the bonds with the Royal Mint in Pretoria and it thus became the South African Mint. In 1961, when South Africa became its own republic, the mint stopped producing British currency and introduced its own currency system.

I am pleased to say, this is among the first gold coins I've purchased off of APMEX. It was in great condition! I wasn't sure if I would like the size of the coin but I actually LOVE it. Will definitely be purchasing more.

I have been buying and selling for just over two years and researched metarls for another three years before starting. I received on this order a 1982 1/4 ounce gold krugerrand. The first time I had ever heard of the name was that year, 1982. This coin arrived in a standard plastic flip but I have to say, it looks as though it had just came out of the press. Not a blemish scratch Nick, nothing. The shine is the best a coin can have and detailing at it's very best. I can see why South Africa began selling in 1967, they and I, are proud to own this coin. Sorry Britain and Canada but I have enough of you, I'm putting my focus on the Krugerrand and the 2 Rand for the rest of the near future. M. King

I ordered the random year and received the first year SA started minting the 1/4 oz. Satisfied to say the least. Being nearly 40 years old it's not mint, but otherwise in great condition. Highly recommend.

My 41st order from Apmex, just like the others this was a pleasant transaction. Received a 1982 coin in great condition. Now I want more.

Bought 1/4 gold Kugarand. Nice coin, good shipping time. Easy to deal with. Coin was bright and shiny but newer mintage. Should have no issues reselling if needed. Got for gift for my father in laws collection. He loved it.

First off, let me say I'm biased towards Krugerrands. I really like the copper tinge, it sets these coins apart from others. The quarter ounce size is perfect for me, I've owned the tenth ounce size before but, they were too small. The diameter of these coins are just slightly less than a US quarter. This is my second order of Krugs from APMEX, I am very happy with these coins, they are in great shape and are competitively priced. Another great job APMEX!