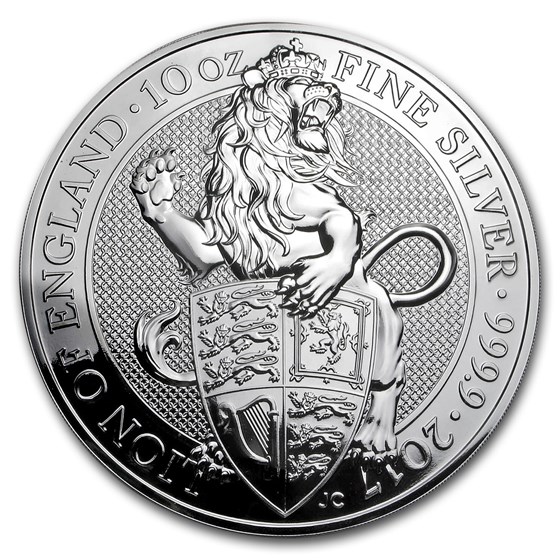 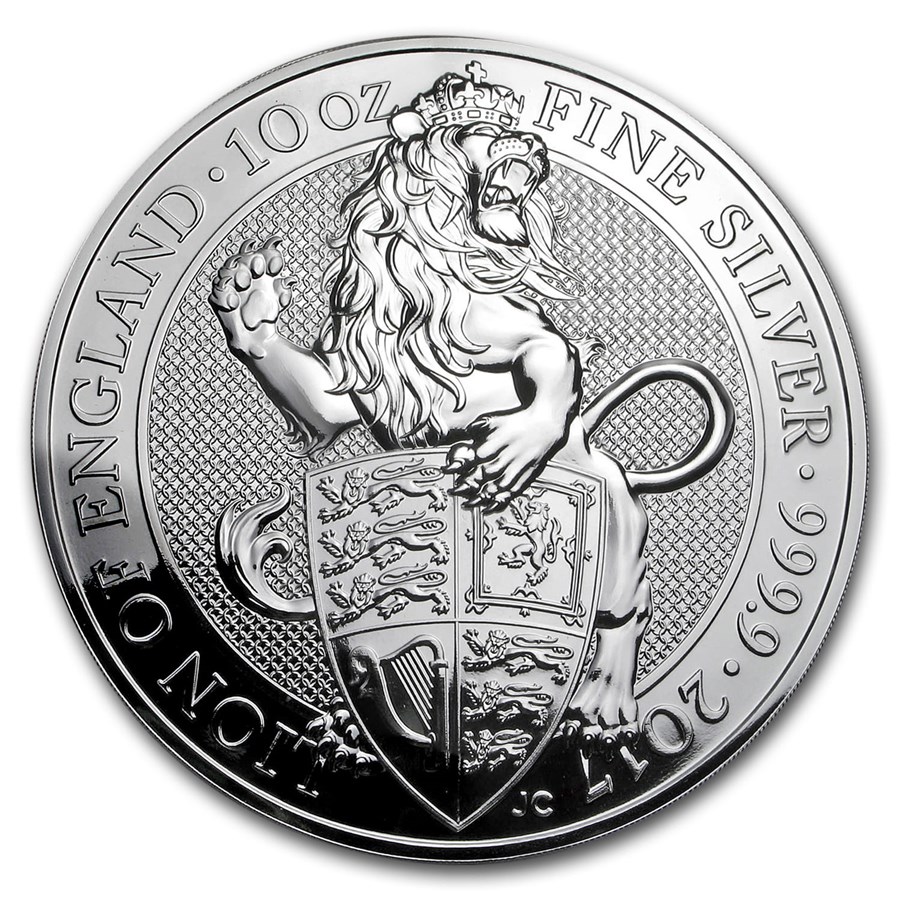 Bearing the Lion of England, a bold image of the United Kingdom, this large format Silver coin release from The Royal Mint is an iconic and majestic find for those investors seeking larger sums of Silver ounces in a single purchase.

Coin Highlights:
Protect your 2017 10 oz Queen's Beasts The Lion bullion coin by adding these cotton gloves to your order.

The 2017 Queen's Beasts Silver coin is the first 10 oz Silver bullion produced by The Royal Mint. Add this historic inaugural issue to your cart today!

The Lion of England Queen's Beasts is the crowned golden lion of England which has been one of the supporters of the Royal Arms since the accession of James I in 1603. It is supporting a shield showing the Arms of the United Kingdom as they have been since Queen Victoria came to the throne in 1837. In the first and last quarters of the shield are the lions of England. The lion and treasure of Scotland appear in the second, and the harp of Ireland is in the third.

Collectors can own a piece of history with a beautiful 10 oz Queen's Beasts Silver coin. The Lion of England, symbolic of the United Kingdom, this Silver coin is perfect for collectors who are seeking a larger sum of Silver in ounces. APMEX offers these magnificent Silver coins at competitive prices.

Largest Bullion Coin Ever Released by the Royal Mint

The 10 oz Silver bullion coin is the largest released by The Royal Mint. The Queen's Beasts Lion is one of the most highly sought after coins by collectors. You can own 10 oz of .9999 fine Silver and add value to your collection with these beautifully crafted coins.
The 10 oz Silver Queen's Beast coin is a new size offered by The Royal Mint, offering more diversity to your collection.
See More +

The 10 oz size is a uniquely sized Silver coin that is unprecedented for the Queen's Beasts series. As a collector or investor, you can add value in bulk. The Queen's Beasts coins are popular with collectors for their high Silver content and beautiful design. Buy 10 oz Silver Queen's Beasts Silver Lions from APMEX today.

The best 10oz. coin I have ever bought

I loved this coin, but there are a few cons, all in all though it's a really good coin.

I was happy with everything about this purchase. My first experience with Apmex. Fast shipping and more importantly good tightly stuffed box. I could tell my order was treated with care. Thanks Apmex!

What an amazing piece of metal. I love big coins and a 10oz round in such a cool design is impossible to beat.

What a fantastic and unique piece of silver. The strike is great and the details show up extremely well. It is really a very hefty coin. It's something to be able to hold 10 ounces of silver as one coin. Definitely a must for bullion coin collectors !!!

This is the most attractive coin i have ever seen. The pictures does not do it justice!!! Thanks Apmex

What an amazing coin

This series is fantastic, but then the 10 Oz. coin just blew me away. I would recommend it to everyone.

Just got my coin today. Lovely.

Lordy, lordy, lordy...what an attactive piece to add to the collection!!! WOW!!!