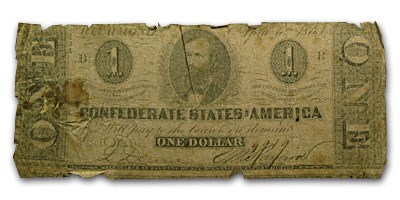 Product Details
Product Details
This heavily worn example of Confederate States $1.00 note is from the series of 1863, and features a portrait of Clement Clay at top center.

CSA $1 note from 1863. Likeness of Alabama and CSA senator Clement Clay at top center. Blank back. Note has seen considerable wear, and has stains and rough edges.