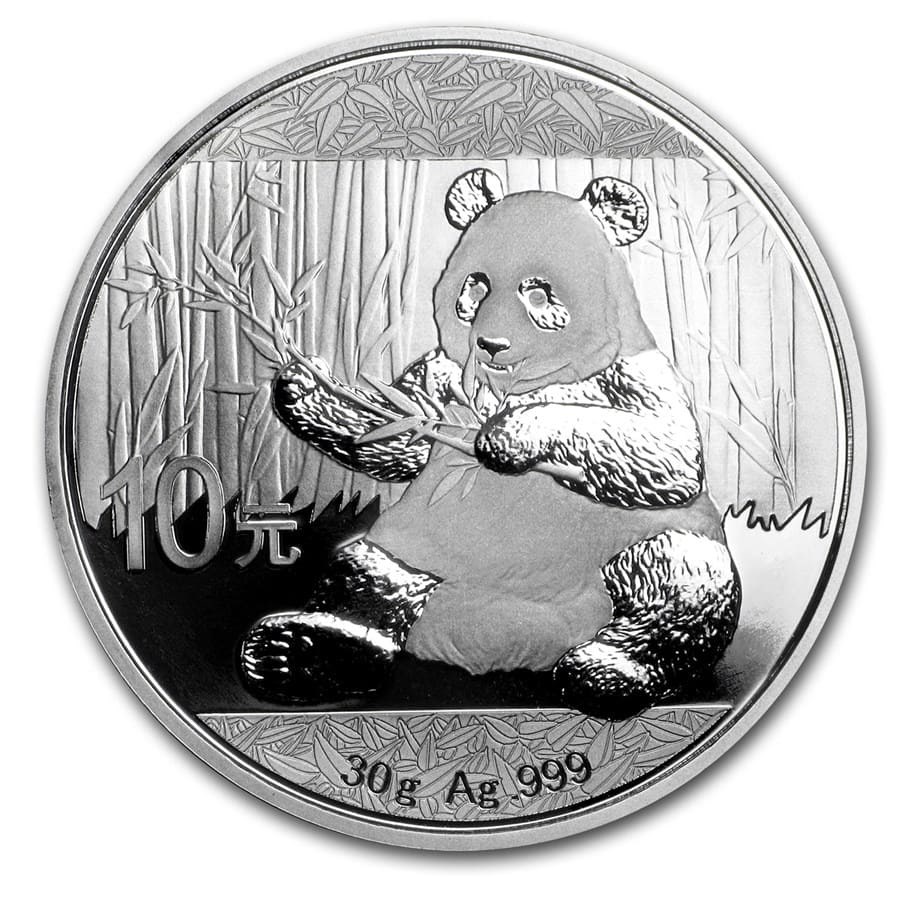 The 2017 Silver Panda is will be the second year with the new weight system for this popular series. Add the 2017 30 gram Silver Chinese Panda coin to your cart today!

Did you know if you bought a 2008 China 1 oz Silver Panda when it was released, your premium investment would have nearly quadrupled?

Download Chinese Silver Panda Coins Specifications
The Chinese Silver Panda is a stunning tribute to the beautiful architecture and precious wildlife the country is known for. The first Silver Pandas were minted from 1983 to 1985 and made of .900 fine Silver. After a few years of a varied production schedule with different purities, the coins were finally struck in .999 fine Silver in 1989. These Silver bullion coins are struck at various mints across China, including the Beijing Mint, the Shenzhen Mint, the Shanghai Mint and the Shenyang Mint.

Chinese Pandas are the best quality coins out there- alongside the Perth Mint. Great design on this one too!

Exactly what I wanted

I needed something, A. Chinese, B. 2017 mintage, C. silver, and preferably, D. nice to look at. This was all 4 and got to me in no time in the midst of the pandemic. I also purchased 2 older 1/10oz gold Panda coins. It's really fascinating to see how the quality of the coins' designs have advanced over the years! Great set to collect.

Not as cute as the other pandas... but this is still really awesome. I love how the bamboo pops out the background.

What can I say, it’s a nice coin. I suggest getting 15 at a time to get the holder

I love the Chinese panda design. I am so happy I switched dealers, you guys shipped so quickly and my entire purchase arrived in great condition and in record time.

Well I just thought Pandas were a must. They have now been discounted even further. Overall, kind of bad experience. Coin value held up but the premium got a big cut. Down the drain with any financial gains.

This is a very nice coin but it arrived with a cracked capsule. I exchanged it for another one that arrived with a worse crack and the coin appeared to have a smudge mark. These have a significant premium and so should arrive from mint to customer untouched in an intact capsule.

Merchant response: We are sorry to hear of the repeat issue concerning the capsule for your coin. We will be sure to make neccessary adjustments to our packaging methods to help prevent future occurences.

Intense! I had to take a minute when I first saw the Pandas. Amazing investment! Thank you APMEX.

Not all Silver are equal

I was disappointed. I ordered my 2017 last week, arrived today in maybe Ms 65-68 condition. Some obvious flaws on the outer edge of the coin and overall not the bu condition I expect for a brand new coin in capsule. My past experiences have always been good, first panda I received in less than 69 or 70 condition.