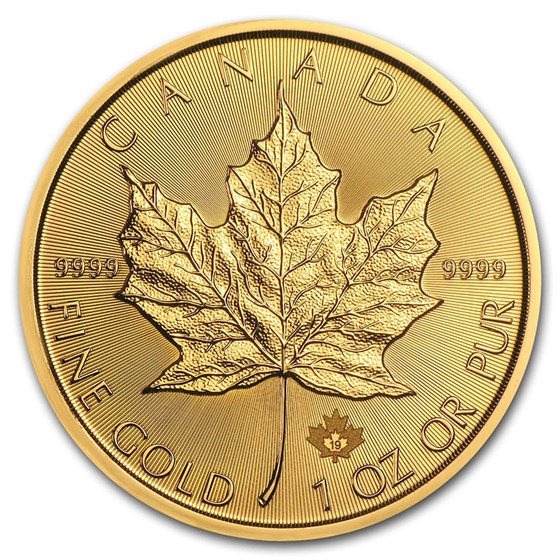 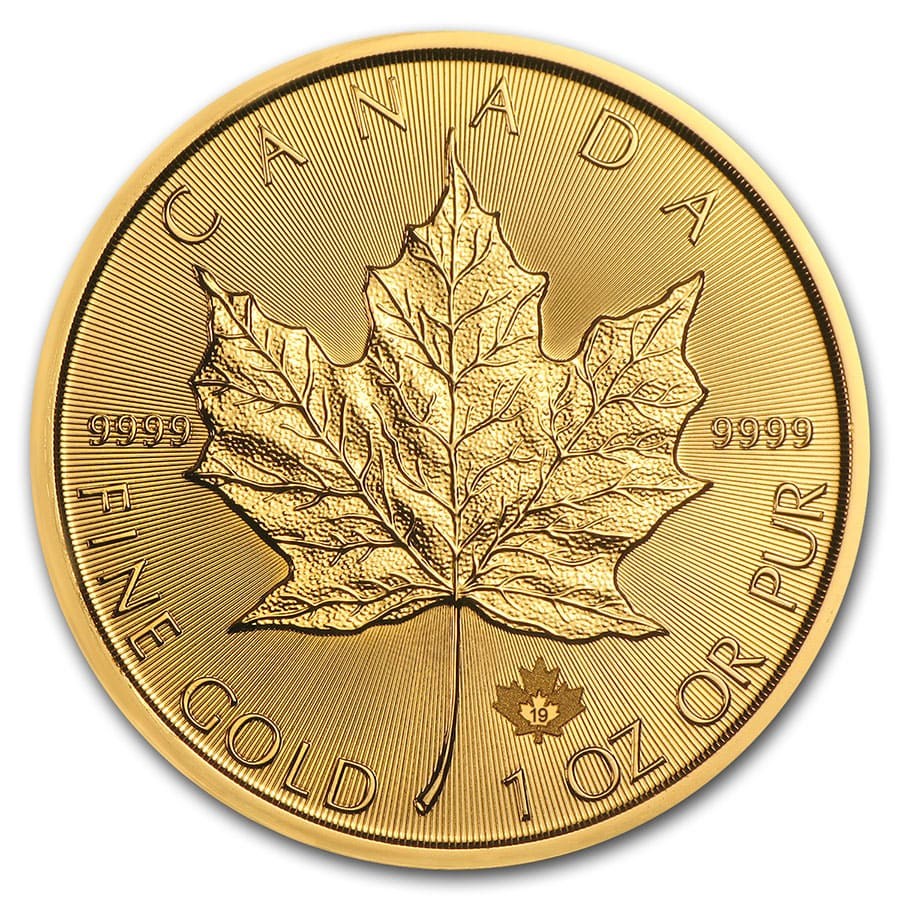 Product Details
Product Details
Containing 1 oz of .9999 fine Gold, the 2019 Gold Canadian Maple Leaf is considered one of the most beautiful Gold coins in the world, appealing to both investors and collectors alike for its beauty and high purity.

The Maple Leaf has been a national symbol of Canada since the 18th century. The 2019 Gold Maple Leafs feature a unique light diffracting pattern of radial lines, making the coins harder to duplicate and providing another measure of security.

The iconic beauty and high purity of these beloved Gold coins now has added security with a radial line background, not seen on bullion products outside of the Canadian Maple Leaf series. Add 2019 1 oz Gold Maple Leaf coins to your cart today!

The 2019 1 oz Gold Maple Leaf features a new form of security through the Royal Canadian Mint’s Bullion DNA program. The Bullion DNA program offers the highest security on the market for any bullion coin. Each bullion coin features a textured maple leaf security privy mark, micro-engraved with laser technology and is visible only under magnification. Etched within the maple leaf security mark are the two digits indicating the coin’s production year. Each micro-engraving is encoded, scanned and recorded at the mint for future authentication giving each coin their unique Bullion DNA.

Produced from a full troy ounce of .9999 fine Gold, each of these Maple Leaf Gold coins is regarded for both purity and aesthetic appeal, creating demand among both collectors and investors. The Royal Canadian Mint is highly regarded for the purity of their Gold bullion, and Gold Maple Leaf coins are sought after by investors around the globe. Canadian Maple Leaf coins were the first in the world to be produced with .9999 fine Gold. A unique layer of security and authenticity is created by a radial line in the background, a feature exclusive to Maple Leaf series coins.

On the obverse, each Canadian Gold coin depicts a portrait of Queen Elizabeth II. Her Majesty the Queen is the official Head of State of Canada because it is a member of the British Commonwealth. Her name, the year of issue and the face value also appear. The legendary reverse of the Maple Leaf coin features the Precious Metals purity information in English and French, as well as the Canada Maple Leaf icon itself.

The 2019 1 oz Gold Maple Leaf coins feature a sophisticated layer of security offered exclusively through the Bullion DNA program of the Royal Canadian Mint. Matchless in the marketplace, Bullion DNA is an important security feature that catalogs every coin for authentication. Each maple leaf is micro-engraved with a textured privy mark that can only be detected through magnification. The micro-engravings are uniquely encoded and all Gold Maple Leafs are scanned and recorded by the mint, creating a permanent record for future authentication.

The portrait of Queen Elizabeth II that appears on the 2019 Gold Maple Leaf coin is viewed as relaxed and natural, portraying Her Majesty without a crown.

The design found on the 1 oz Gold Maple Leaf depicts the close connection Canada has to the monarch of England. Through the years, Queen Elizabeth II has been shown at three varying stages in her life, first at age 39 in a portrait created by Arnold Machin and later at age 64 as designed by Dora de Pedery-Hunt. Currently, she is shown through a picture created when she was 79 by Susanna Blunt. The present portrait was chosen through a nationwide competition in Canada. The Royal Canadian Mint invited Blunt to submit a portrayal, having been impressed by her depiction of Gerda Hnatyshyn, the wife of Ontario’s Governor General Ramon Hnatyshyn, for Rideau Hall in Ottawa, Ontario. She also painted a likeness of Prince Edward, delivered to Buckingham Palace.

These 1 oz Canadian Gold Coins are struck with a denomination of $50, giving each one face value in addition to the spot price of the bullion within. This bullion is loved by investors because the Gold value is much higher than the face value. Because people adore the elegant leaf design and detailed depiction of Her Majesty Queen Elizabeth II, collectors enjoy the beauty of this coin above and beyond the inherent value.