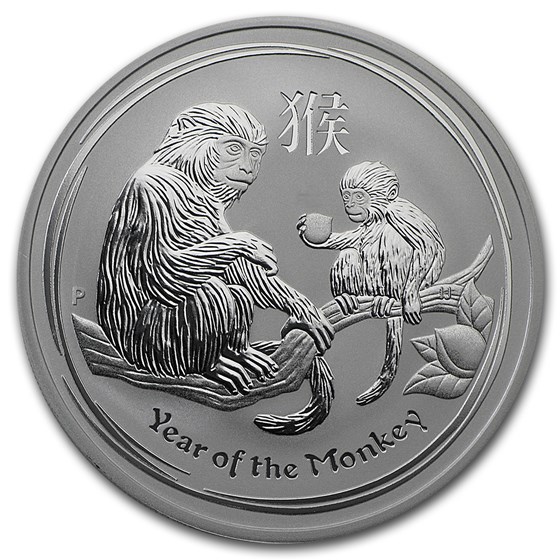 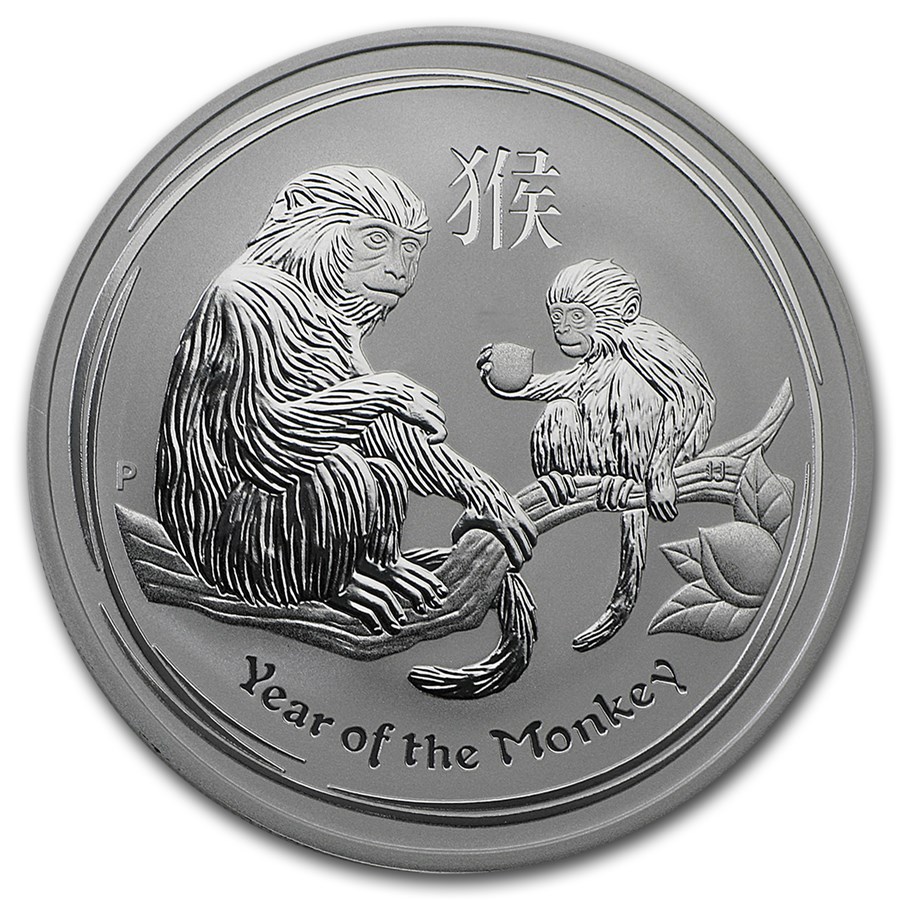 Product Details
Product Details
The Perth Mint's lunar series has been popular since its first release, and this 2016 edition is no different. Featuring a one-of-a-kind design in .999 fine Silver, these Silver Lunar coins provide interest for investors and collectors alike.

The Perth Lunar Series 1 concluded in 2007, and in 2008 began the Lunar Series 2 that is now in production. These releases have been tremendously popular worldwide, with each year selling out quickly as investors and collectors claim the coins of all sizes. As each 1 oz Silver bullion coin in Series 2 has been limited to only 300,000 coins worldwide, the prolonged popularity is ensured by the high level of collectibility as well as the stellar designs from the reputable Perth Mint.

The Silver Lunar Monkey coin features an adult and a child monkey, a family theme that is evident across several different coin series. Other Silver Australian Lunar coins, such as the coins commemorating the Year of Goat, Year of the Rabbit and Year of the Ox feature families of animals as well. Similar to these Silver Lunar coins, a family motif is commonly featured on the Somalia Silver Elephant series and the Gold Isle of Man Cat Series, showing different breeds of these animals and their young. In addition to these 2016 Lunar coins, Tokelau Gold Lunar Monkey Family coins offer another image of a monkey family and another option when building an animal family-themed coin collection.

The history of the 1 oz Silver Lunar Monkey coin

The Silver Lunar Monkey coin is part of the Perth Mint’s Lunar Series and commemorates the Year of the Monkey, a primate connected to Chinese culture for over 2,000 years. The Australian Lunar coins are especially important to those born under the sign of the monkey, which symbolizes sociality and communication. Like many of the images on Silver Lunar coins, the monkey has mythological significance to Chinese culture: a connection to the Gods who often disguised themselves as the primates. The 2016 Lunar coins also continue the popular Chinese tradition of a monkey holding a peach that represents immortality.

When collecting Silver Lunar Monkey coins, there are many options for expanding your collection such as colorized and holographic coins that commemorate the Year of the Monkey. Australian Lunar coins from the Perth Mint’s Gold and Silver Lunar Series 1 and 2 feature four different images of monkeys, so collectors have wide selection of designs to choose from. In addition to Silver Lunar coins, some world mints like the Royal Canadian Mint offer colorized versions of the Year of the Monkey coins, adding some pop to collections. In addition to buying 2016 Lunar coins from the Royal Canadian Mint, also consider purchasing the 2004 Year of the Monkey hologram coins, which add a unique twist to a traditional collectible.

Product and delivery exactly as advertised. Thank you Apmex

Definitely a good add to anybody’s collection. it will become hard to find and you will have a great talking piece !

funky looking monkeys but I had to have it

Another one for my lunar collection these are great

Shipping was fast! Coin came in mint capsule and looked flawless! Will be doing lot's of business with Apmex!

Exactly what u would expect from Perth mint, beautiful design and flawless execution. Wish I had more than one

The Perth Lunar coins are amazing and this coin is a great addition!

Began purchasing collectible gold and silver coins from APMEX 18 months ago based on recommendation of family member. Total value of coins has increased 22 percent over purchase price as of today. My APMEX representative is excellent! I shall continue doing business with both.

I am a huge fan of the Perth Lunar II series. I am new to the Silver community and had to start with this gem.

I love those little monkeys, reminds me of my mischievous cats' I trust products from apmex. I've bought from them since about 2000A.D.