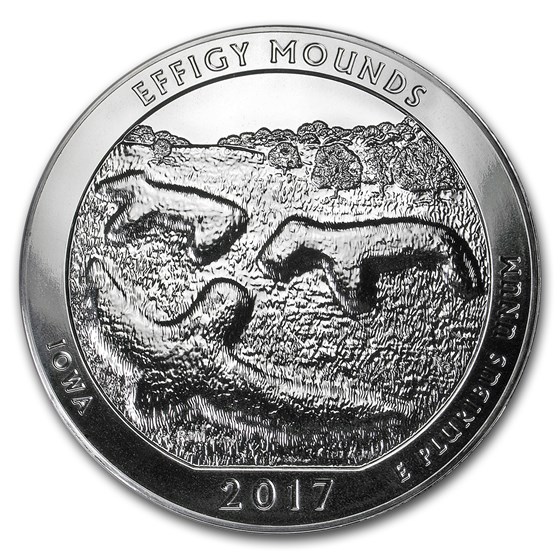 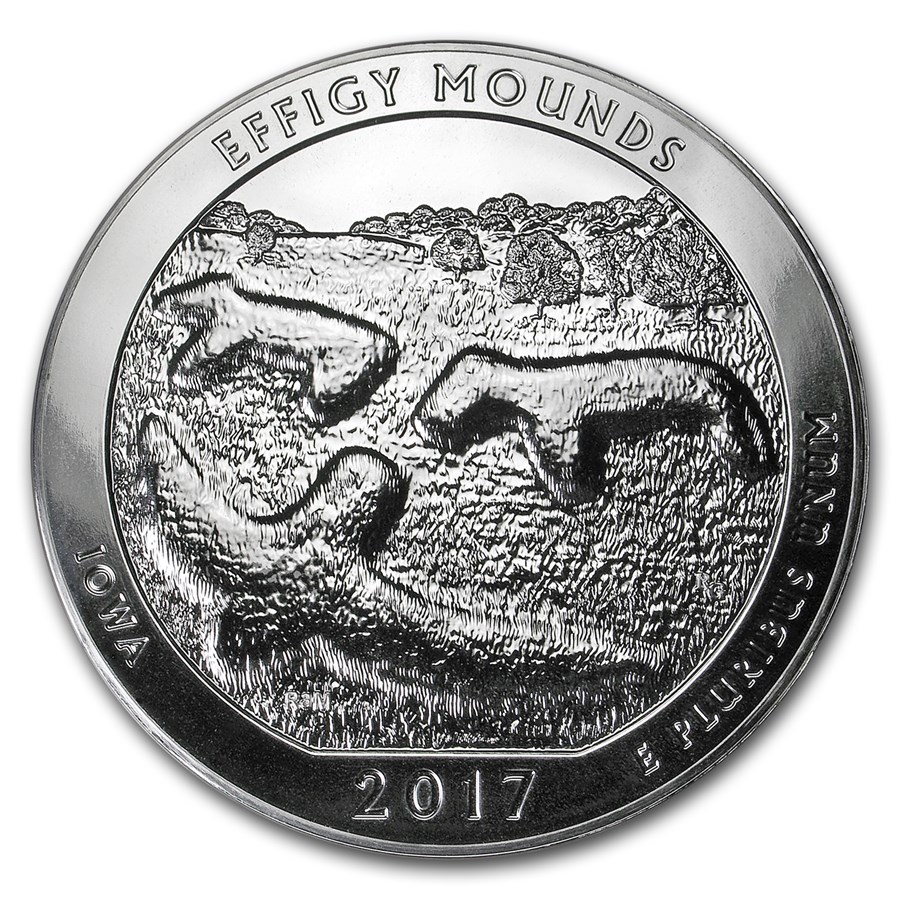 $256.00
Any Quantity
Product Details
Product Details
Effigy Mounds National Monument protects one of the largest remaining concentrations of ancient American Indian earthworks in the United States. It is the first release of 2017 in the U.S. Mint's popular 5 oz Silver bullion America the Beautiful series.

These coins are demanded by collectors for their artistic value. Add this attractive coin to your collection today!

Established in 1949 the park is considered a sacred landscape by members of many modern-day tribes whose ancestors once lived here. The majority of the mounds were constructed between one thousand and two thousand years ago — often to inter the dead, but sometimes for ceremonial purposes, or to tell important stories. Today, Effigy Mounds National Monument offers an excellent view of the Mississippi and Wisconsin Rivers, and is home to a wide diversity of flora and fauna and helped shape the lifestyles and the belief systems of the moundbuilders.

I will be buying here again

I collect these coins. I got what I paid for. Of all the coins I have so far, the Effigy Mounds coin is the least attractive, but I'm working towards having the entire set, so pretty or not, I needed the coin.

Not my favorite design but going for the lot

I love these coins!

The ATB coins are a nice way to buy 5 coins a year and end up with 25 oz of silver. The coins are always different and are a little slice of American history. My girls love them also so I am buying two of each so they will be passed along for others to admire.

RECURRING ITEM TO ADD TO COLLECTION OF SERIES' VERY PROFESSIONAL SYSTEM. 100% TOTAL SATISFACTION WITH SUBSCRIPTION PROCESS. YOU GET WHAT YOU ORDER, AND PROMPT. THANK YOU

Thank you once again, Apmex!

I received the same great service from APMEX. This coin was shipped well and the example I received is choice, not having a lot of marks or other negatives. That's why I keep coming back to APMEX. This particular issue is not one of my favorite designs; still, it is part of a set.

I was thrilled to be able to buy this coin at the very attractive price offered. I have purchased all the regular size and most of the 5 oz ATB coins and just love the concept. I feel they will only go up in value. I tried the pre order and decided to save a little more and send in a check rather than using the credit card option and see how that worked. I immediately received an email when they received my check and that will be my method of purchase from now on. I am very please with APMEX and these coins.