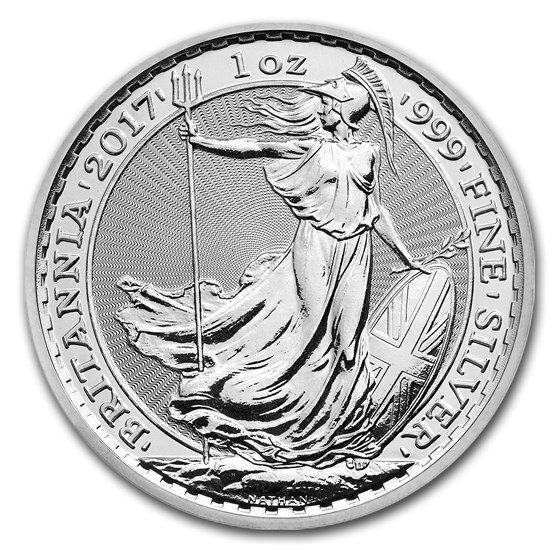 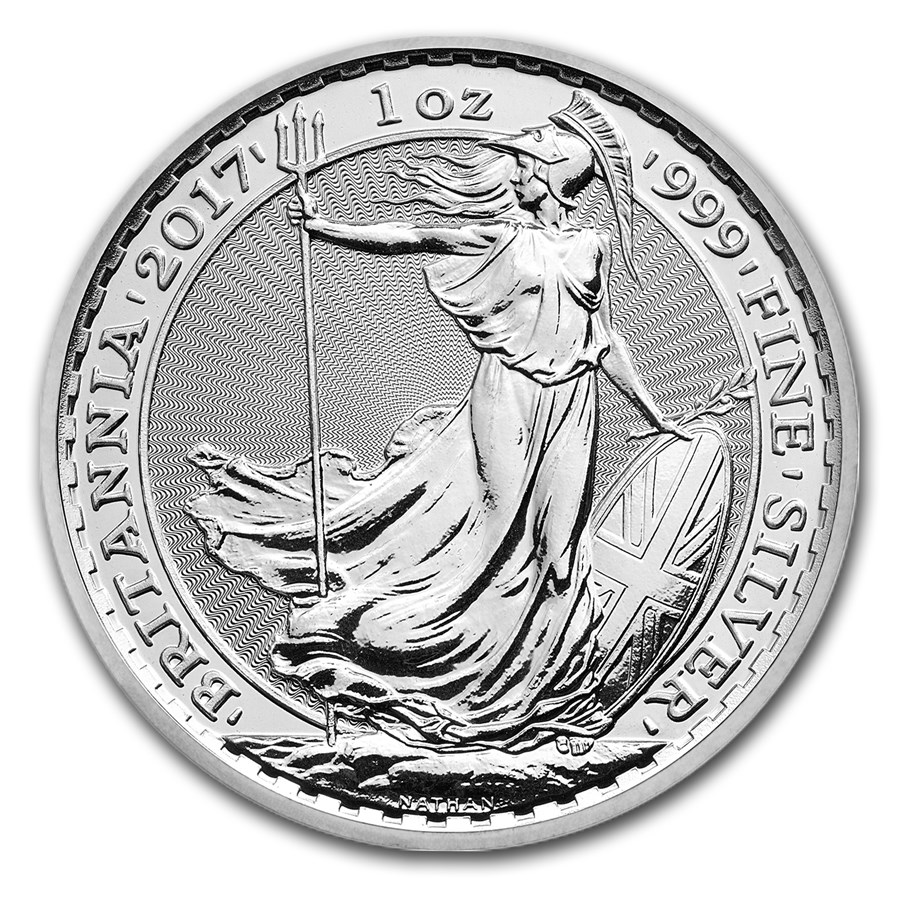 Your purchase will match the quality of the product shown.
Product Details
Product Details
Celebrate the Silver Britannia's 20th anniversary with this stunning coin from The Royal Mint. A radiating pattern has been added behind Britannia. Not only does this feature add sophistication but is also an anti-counterfeiting security.

Coin Highlights:
Protect your Silver Britannia with this clear plastic capsule or display it in style by adding an attractive presentation box to your order.

Steadfast and confident, Britannia is a symbol of resilience and strength. In 2017, The Royal Mint commemorates the 30th year since Britannia’s bullion design was launched to market. Sculptor Philip Nathan, the designer of the first Britannia bullion in 1987, envisaged her as a classic and evolving icon. In these additions to the bullion collection, she stands firm as a powerful gale whips around her shield, Corinthian helmet and olive branch. This design features a radial sunburst at her back.

In 2017 the Silver Britannia coin celebrates its 20th anniversary. To celebrate this significant milestone, the 2017 Britannia design has been refreshed with a high-security radial sunburst background, modernizing this iconic coin. Debuting in 1997, the first Silver Britannia featured the same design as its Gold counterpart. Issuing years from 1997 to 2012 were minted in .958 pure Silver, while those minted in 2013 and thereafter feature .999 fine Silver.

The design on the reverse, the Britannia, is a symbol of resilience and strength. The Britannia has been used as a female personification of the Briton Islands for generations. This symbol has been used on coinage, bank notes, stamps and other monetary uses. The design itself is beautifully crafted and is depicted with intricate and immaculate detail. Beginning and experienced collectors will enjoy the coin for its high quality and metal content, but they can marvel at the artistic beauty of the Silver Britannia. Order your 2017 Silver Britannia today.

The Royal Mint implemented a new anti-counterfeiting security feature on all 2017 Silver Britannias.

In 1987, Britannia’s image graced the new Gold bullion coin minted by the Royal Mint known as the Gold Britannia. These Gold coins have since grown in popularity a collector’s piece. Gold Britannias are available in sizes as small as 1/20 oz and as large as 5 oz Gold coins. In 1997, the Royal Mint expanded this design to a Silver bullion coin known as the Silver Britannia. Over time, both the Gold Britannia and Silver Britannia have experienced changes in design and an increase in metal purity, making them major players in the modern coin market.

Very nice packaging and everything! I only wish these coins were still minted in 95.8% silver instead of 99.9% silver!

I have ordered quite a few products from APMEX and have always been overly impressed with the quality. However on this specific purchase, my Britannia had several spots underneath the arm. The coin is a great part of my collection, but I was left disappointed with the quality compared to the other coins I have purchased in the past.

Merchant response: Thank you for your feedback. Our Returns Dept will contact you soon to further assist.

Happy with the coins, thanks!

These are great design coins.

This coin has a very gorgeous design. It is definitely tops in my collection.

Really beautiful coins, would not hesitate to buy more of these.

The silver Britannia coin is a product that is superb in detail and immaculate condition! I can not be happier for a BU product from Apmex. This company's reputation is one, if not, the best in the business.

Britannia's look cool and come with a lower premium than ASE's. I like it

Design, very good, looks great. Will hold to this one

As usual coin in great shape,received shipment,in 2 days (Ohio have not had a problem with any coins, bars, ect good job APMEX