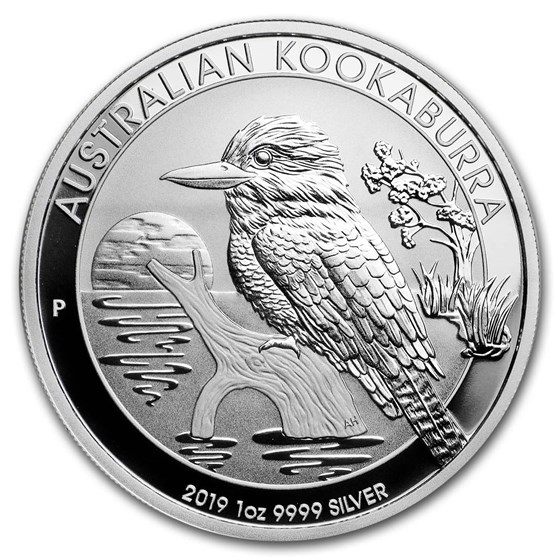 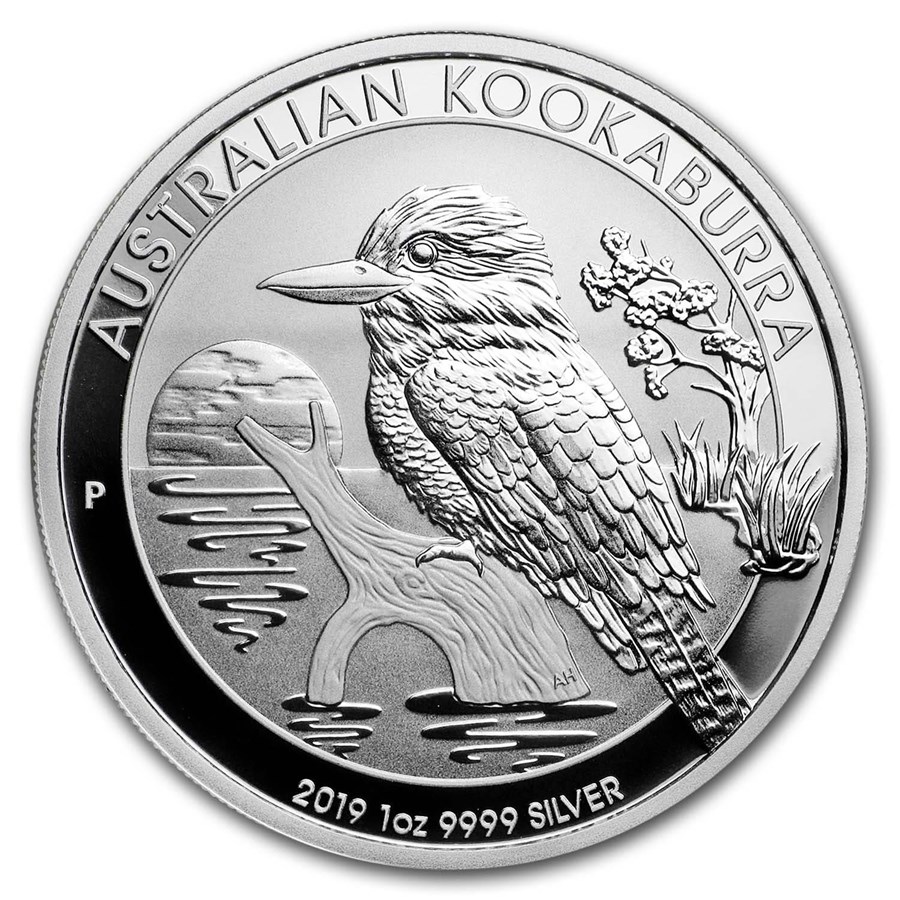 $37.94
Any Quantity
Product Details
Product Details
The 2019 Perth Mint Kookaburra features a striking new design as well as .9999 fine purity! A laughing kookaburra, the largest member of the kingfisher species, is synonymous with the Australian outback.

Coin Highlights:
Protect and display your Silver Kookaburra in style by adding an attractive display or gift box to your order.

The Australian Silver Kookaburra series from the Perth Mint began in 1990 and is the longest-running bullion program from the mint. Each year has a different design of a kookaburra on the reverse. This is the first year of the new Jody Clark effigy of Queen Elizabeth II on the obverse.

The laughing Kookaburra is the largest member of the kingfisher species, and a bird synonymous with the Australian bush. This bird species is indigenous to Australia and is known for their call, which is said to sound like echoing human laughter.

Not only are designs changed on the bullion coins each year, the Proof designs vary each year as well! Historically, the mintage of each 1 oz bullion Silver Kookaburra coin has been a maximum of 300,000 coins. However, in 2011 the maximum mintage was moved to 500,000 coins to accommodate the very high demand for this series. Compared to other Silver bullion coin series, this mintage is still very small and has helped ensure the collectibility of each coin.

The Australian Silver coins featuring the native kookaburra make up the longest-running bullion coin series for the country. First seen in 1990, it was also the first series of coins introduced by The Perth Mint to be made with unique yearly designs on the reverse that pay tribute to species native to Down Under. The largest bird in the kingfisher family, the kookaburra can grow to nearly 18 inches long. The large beak and head give this bird an impressive silhouette that is perfect for inclusion on a Silver bullion coin. In nature, the kookaburra tends to have mostly white and blue feathers, tones that can almost be perceived in the reflection cast by the fine Silver.

Each Kookaburra Australian coin is made with one troy oz of .9999 fine Silver. The Western Australian government has authorized this series for nearly three decades. With a face value of AUD $1, each coin is legal tender in Australia, although the Silver bullion used in the coin is worth much more. Queen Elizabeth II is shown on the obverse, which is traditional for coinage issued by countries within the British Commonwealth. This series is most recognizable, though, for the adorable kookaburra designs that appear on the reverse each year. New artwork is chosen for each limited mintage release.

Depictions of this feathered native to Australia have shown the bird in many natural settings, from resting on branches to soaring in flight. Because kookaburras are very protective of their surroundings, The Perth Mint typically honors this by showing details of the birds in nature. They are known for their laugh-like call, usually heard around sunrise or sunset. While you cannot hear the laughter of the kookaburra through these Australian Silver coins, of course, the playful depictions give you a sense of the joy they bring to anyone who sees them.

Opened as a branch of Great Britain’s Royal Mint in 1899, The Perth Mint is the oldest mint in Australia that is still in operation. Under British control until 1970, The Perth Mint is now managed by the Government of Western Australia. This mint has a strong legacy of quality coins and bullion, which makes this collectible coin a favorite of many investors.

The bird depicted on the 2019 Australian Silver Kookaburras can be found in open woodland areas throughout Australia, as well as nearby New Guinea.

While the bird itself is always the centerpiece of the reverse, elements from the native Australian habitat are typically part of the depiction. Forests and woodlands are the usual home for laughing kookaburras, who often nest in family groups and communities. They have been known to occupy suburban parks, orchards and even central locations in some towns with sufficient trees. Laughing kookaburras occupy forests and woodlands or where there are suitable trees, usually in loose family groups.

Because only a limited number of the Silver Kookaburra coin is made each year, collectors typically purchase early to ensure the annual design is not missing from their collection. With nearly 30 years of designs in the series so far, collections have the potential to grow very large. Silver bullion coins are an excellent option for beginning investors and the playful designs can help instill enthusiasm in younger investors. Those who have traveled to Australia and heard the laugh of the kookaburra in person will undoubtedly find joy in purchasing these high-quality Silver coins.

my favorite Kookaburra design yet

The 2019 Kookaburra is my favorite design from the Pearth mint, the capsule it comes in is perfect and I just can not get enough looking at the lovely design of this coin. Thank you Apmex!

Sweet coin's bought two of them very happy with them look better in person Fast shipping !!

APMEX has a customer

I bought this as a novelty piece. I am very satisfied with APMEX and have no issues with this or any order to date.

First Kookaburra in my stack - amazing!

The Kookaburra was never a part of my ever growing stack mainly because the hype and popularity of these has caused the premiums to escalate out of a range I'm comfortable paying. With these, I didn't care about that. The design is just absolutely amazing. The Aussie mint hit it out of the ballpark with these. I had to have a roll.. my favorite Kook of all time! Get these, they're truly incredible.

Beautiful design. Glad to get the presale edition. Thanks apmex.